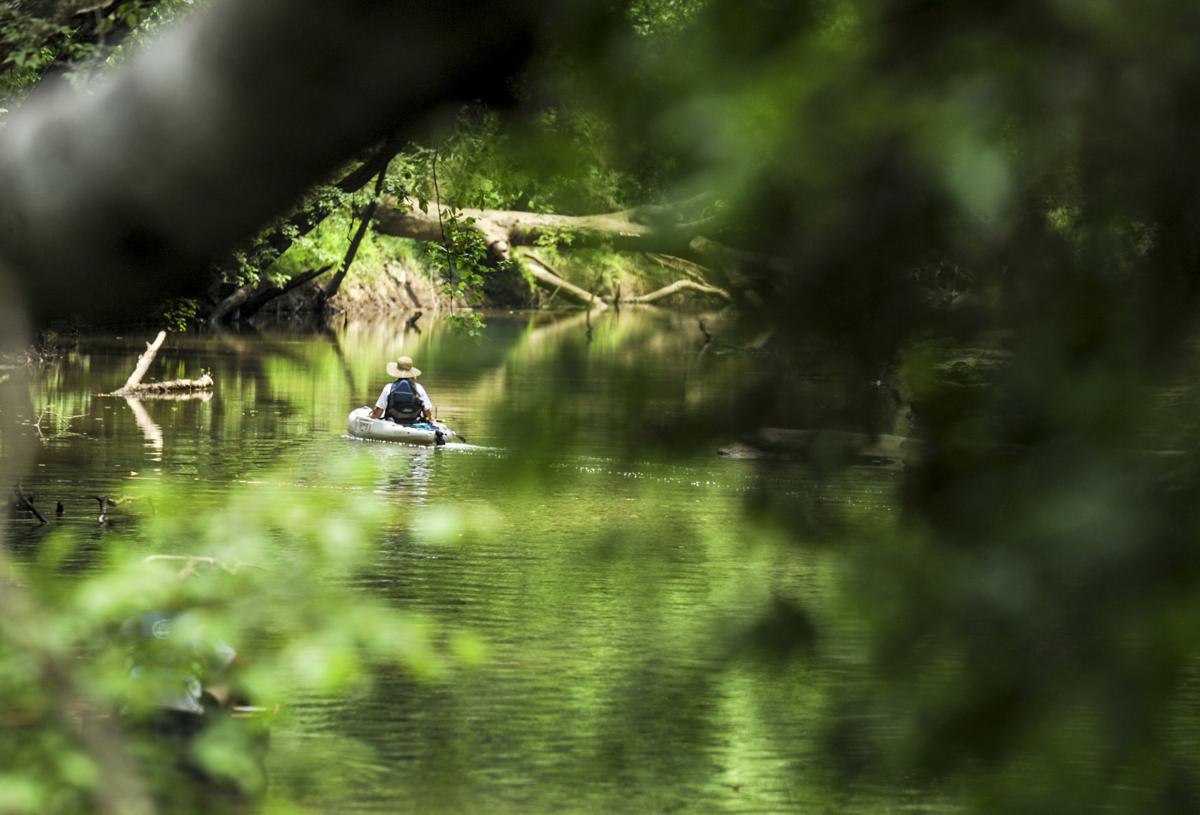 Julia Bright canoes in Flint Creek in Hartselle on Wednesday as part of an exploratory trip to make sure the Flint Creek canoe and kayak trail is clear for boaters ahead of its opening Friday. The trail is 20 miles long and goes from Hartselle to Point Mallard in Decatur. [JERONIMO NISA/DECATUR DAILY] 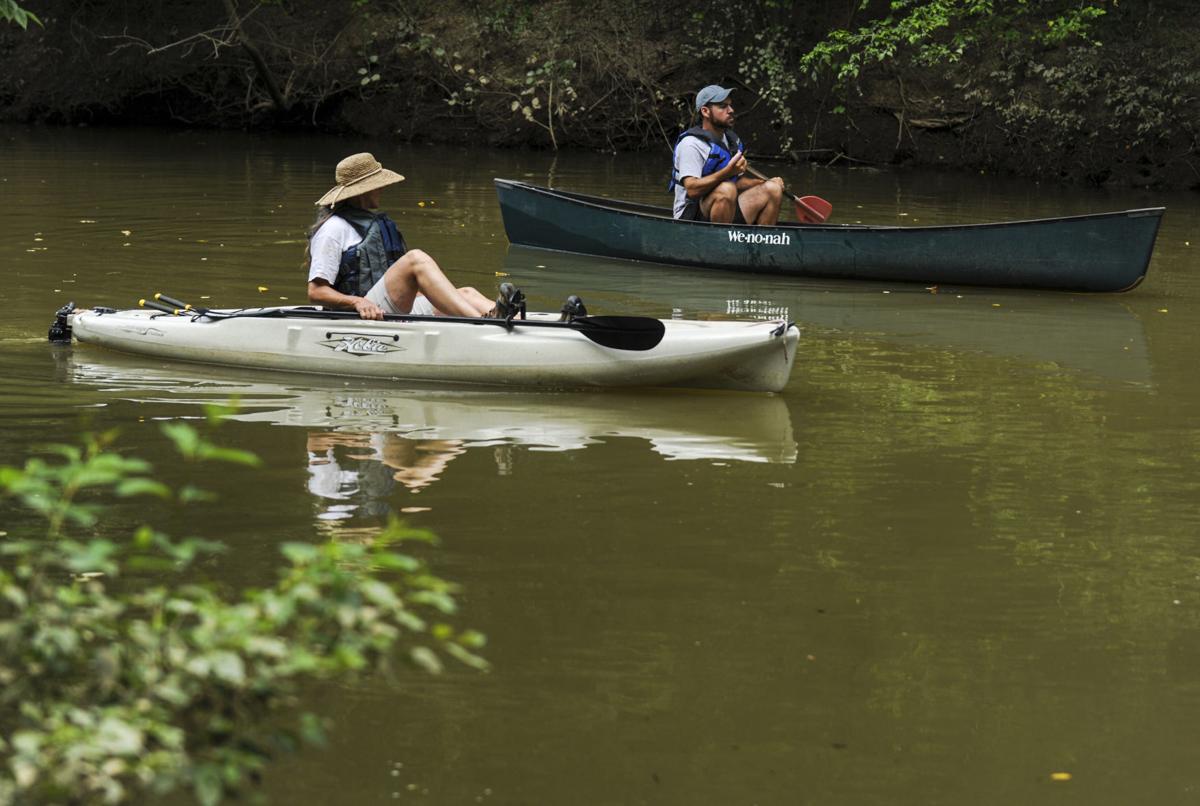 Julia Bright canoes in Flint Creek in Hartselle on Wednesday as part of an exploratory trip to make sure the Flint Creek canoe and kayak trail is clear for boaters ahead of its opening Friday. The trail is 20 miles long and goes from Hartselle to Point Mallard in Decatur. [JERONIMO NISA/DECATUR DAILY]

A 20-mile Flint Creek canoe and kayak trail that winds from Alabama 36 near Hartselle to Point Mallard Park and crosses through parts of Wheeler National Wildlife Refuge officially opened Friday as part of the Alabama Scenic River Trail system.

The Flint Creek Canoe Trail features several access points and campsites so boaters can easily plan a day trip or a longer journey, officials said. Those locations are marked on a map available on the Alabama Scenic River Trail’s website and at decaturdaily.com.

Sen. Arthur Orr, R-Decatur, said the trail will enhance the area’s quality of life, which studies show is the No. 1 reason individuals or businesses choose to locate in a particular location.

“It adds another amenity to the overall community,” helping attract more people to visit and live in this area and businesses to locate or expand here, said Orr, who initiated the project, calling on the Alabama Scenic River Trail to develop the trail in Morgan County. The nonprofit organization worked with community partners for nearly two years to complete the project.

“It also opens up more of the refuge and TVA land to citizens,” Orr said. “It allows access for citizens to enjoy this preserved habitat, almost at their doorstep.”

Grantland said kiosk signs that feature a map of the trail were being installed Thursday afternoon at the launch locations.

Danielle Gibson, president and CEO of Decatur Morgan County Tourism, said the timing of the trail's opening is perfect, since people are looking for outdoor activities close to home during the pandemic.

"I think it'll be very beneficial for our community," said Gibson, who expects the attraction to draw traffic from Birmingham and Nashville. "I think it'll have a huge impact."

The Flint Creek trail's launch sites are at Alabama 36 near Hartselle on the southern end of the trail; Vaughn Bridge Launch, which is 5 miles from the start of the trail; U.S. 31 Boat Launch across from the WaterWorks Center for Environmental Education; Osprey Point Landing at Alabama 67; Hickory Hill Boat Launch with access from Hickory Hill Road off Alabama 67; and Duncan Hill Launch on the refuge adjacent to the Tennessee River channel.

The Flint Creek Canoe Trail adds to the more than 6,000 miles of waterways that make up the Alabama Scenic River Trail’s statewide network of river trails. The original 650-mile core trail runs from northeastern Alabama to Fort Morgan.

The designated campsites on the Flint Creek trail, which are only accessible by water, are also marked on the map, Grantland said, adding that camping isn’t allowed on the refuge. He said the Morgan County Rescue Squad will be installing mile markers along the route to help paddlers pinpoint their location and signs marking the designated campsites.

River trail development along other sections of the Alabama trail has been credited with the addition of small-boat rental shops, impacting the economy in some of Alabama’s smaller communities.

Tony Bean, a kayak angler and owner of The Kayak Store in downtown Hartselle, said the opening of the trail is “great news."

“I get a ton of people in the store asking where to go for a good long float,” said Bean, whose shop is about 5 miles from the trail. “I’m glad we can offer them a good place to go for recreational paddling.”

He said that canoeing and kayaking have grown in popularity, especially during the pandemic.

The Flint Creek Canoe Trail was completed in partnership with the Wheeler National Wildlife Refuge; the Alabama Mountains, Rivers & Valley’s Resource Conservation & Development Council; the Morgan County Rescue Squad and Ace Lawn Care and Landscaping, which assisted in clearing some large trees that were blocking parts of the waterway.