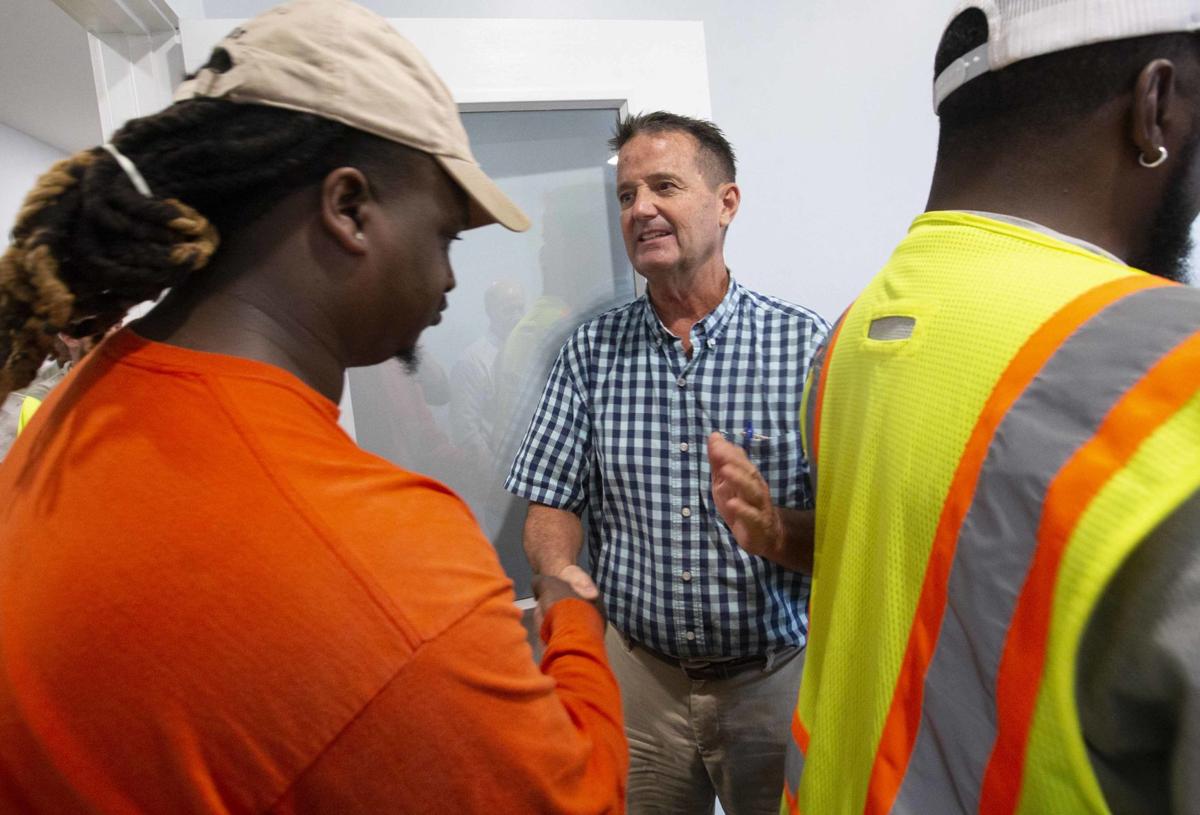 Colbert County county engineer John Bedford greets each road department workers who he has worked with inside the new administration building as they gather for his retirement party. [MATT MCKEAN/TIMESDAILY] 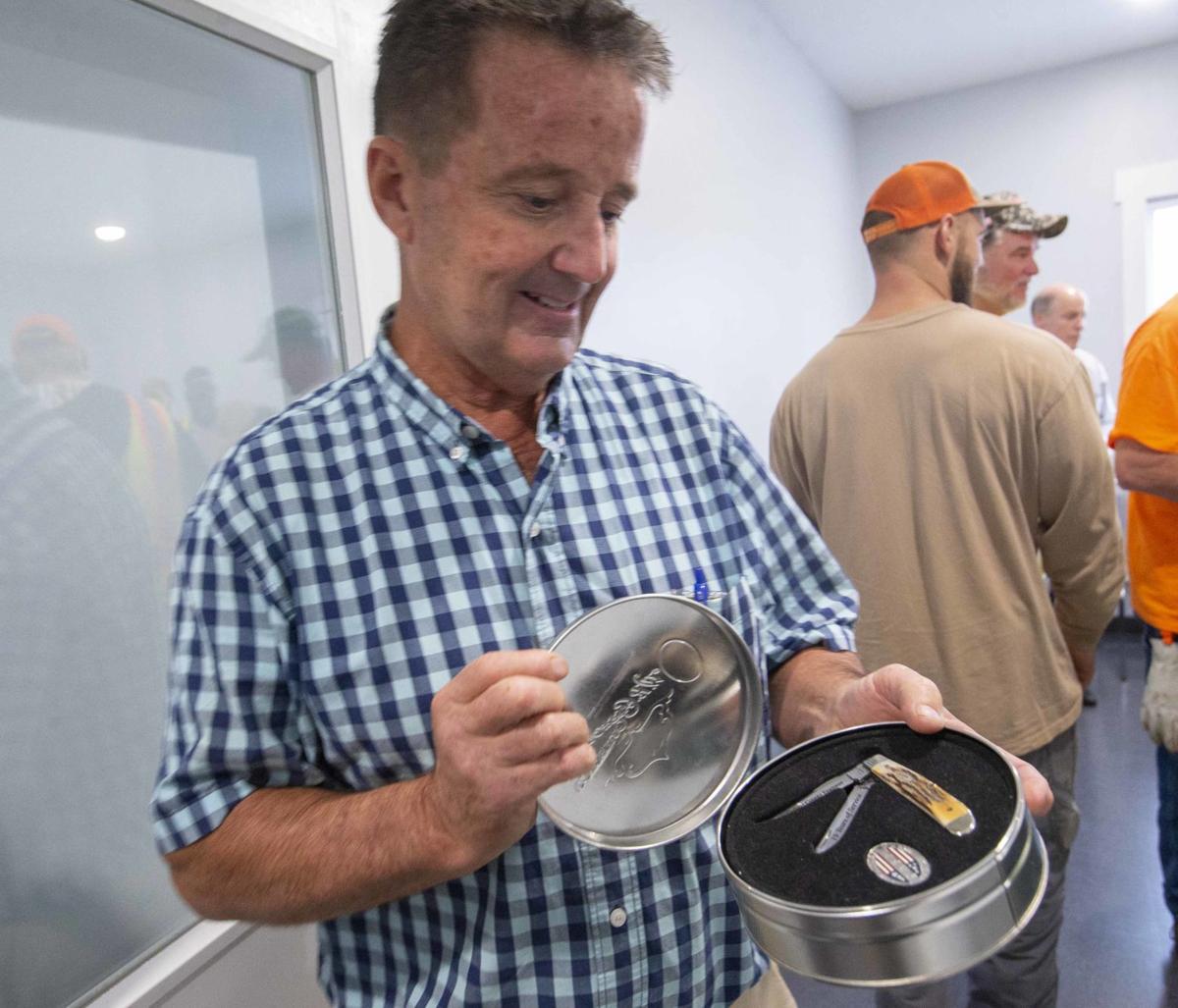 Colbert County engineer John Bedford displays a commemorative pocket knife he received for his 19 years of service with the road department at his retirement party. [MATT MCKEAN/TIMESDAILY] 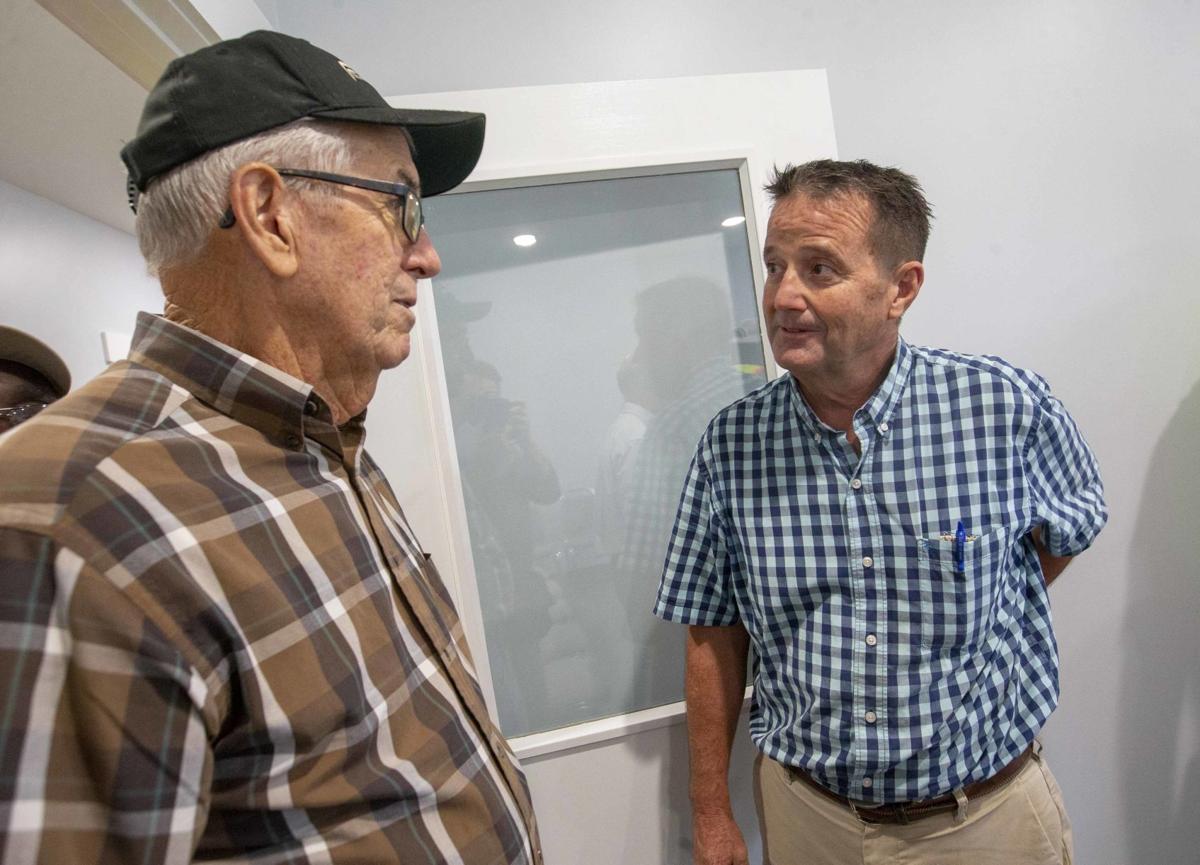 Colbert County county engineer John Bedford Steve Houston who he has worked with for a long time during his retirement party inside the new administration building. [MATT MCKEAN/TIMESDAILY]

Colbert County county engineer John Bedford greets each road department workers who he has worked with inside the new administration building as they gather for his retirement party. [MATT MCKEAN/TIMESDAILY]

Colbert County engineer John Bedford displays a commemorative pocket knife he received for his 19 years of service with the road department at his retirement party. [MATT MCKEAN/TIMESDAILY]

Colbert County county engineer John Bedford Steve Houston who he has worked with for a long time during his retirement party inside the new administration building. [MATT MCKEAN/TIMESDAILY]

TUSCUMBIA — John Bedford said he warned his family in 2000 that his new job as Colbert County Engineer could take up a lot of his time, but he felt strongly about his commitment to the residents of the county.

As county engineer, he was not only responsible for the Road Department, but also the county's Water Department.

On Wednesday, the Road Department's new office building served as the venue of a retirement party for Bedford, who is stepping down from the position he's held for the past 19 years. His retirement is effective today.

"My interest was the county," Bedford said. "It's always been the county. I put work before family many times."

Assistant County Engineer Jeremy Robison is taking over the reins of the department and Charles King has been hired as his assistant. King was serving as the assistant engineer in Elmore County.

Bedford's retirement party was a perfect opportunity to show of the Road Department's new building. Bedford said most of the construction was funded through the sale of county property that fronts U.S. 72 in front of the department.

Robison said the property was never used and now it can be developed and eventually provide tax revenue for the county.

The building is more energy efficient and has a more secure lobby, complete with a restroom for the public. The building has a built-in safe room in the event of severe weather.

"John put others and the county above himself," Robison said. "He was dedicated to the position."

He said Bedford has been a great mentor and teacher in the 14 years he has worked for him.

"I've learned more from John than anyone else," Robison said. He has taught me a lot more than just engineering. He has led by example and always put the county's needs before his own."

Bedford said he always tried to find innovative ways to maintain the county's roads and bridges, such as replacing some small concrete bridges with wooden structures, and finding grant opportunities that would stretch county funds.

"We had to be very, very innovative using the money as wisely as we could," he said. "I tried to bring in better equipment for the employees so they can get better results."

Bedford said he worked with the commission to improve pay for Road Department employees and pushed for more consistent and reliable revenue so roads and bridges can be properly maintained.

Commissioner David Black thanked Bedford for his plan to borrow money against the future revenue from the states's new 10 cent gasoline tax which allowed the county to begin resurfacing more than 60 miles of county roads this year.

Bedford said he was blessed with a diversified county government that was open to discussion, especially former Commissioner Emmitt Jimmar, who often had questions about Road Department projects.

He said the commission was open to improving the county's mosquito spraying program and white goods pickup program.

Bedford said he hasn't seen much change in the number of calls from the public to the road and water department. He said Robison is interested in expanding the departments' social media presence.

"I think public participation has been about the same," he said.

Bedford said he didn't consider the problems and lawsuits associated with the water treatment plant construction a low point, but as a challenge.

His biggest disappointment was not getting a 3 cent gasoline tax approved, but the passage of the 10 cent gasoline tax will provide additional revenue to allow the Road Department to improve road and bridge maintenance.

"He is definitely going to be hard to replace, but there is no one else I would rather be following because he is leaving these departments in as good a shape as they could possibly be in," Robison said. "It has been an honor to work for him."