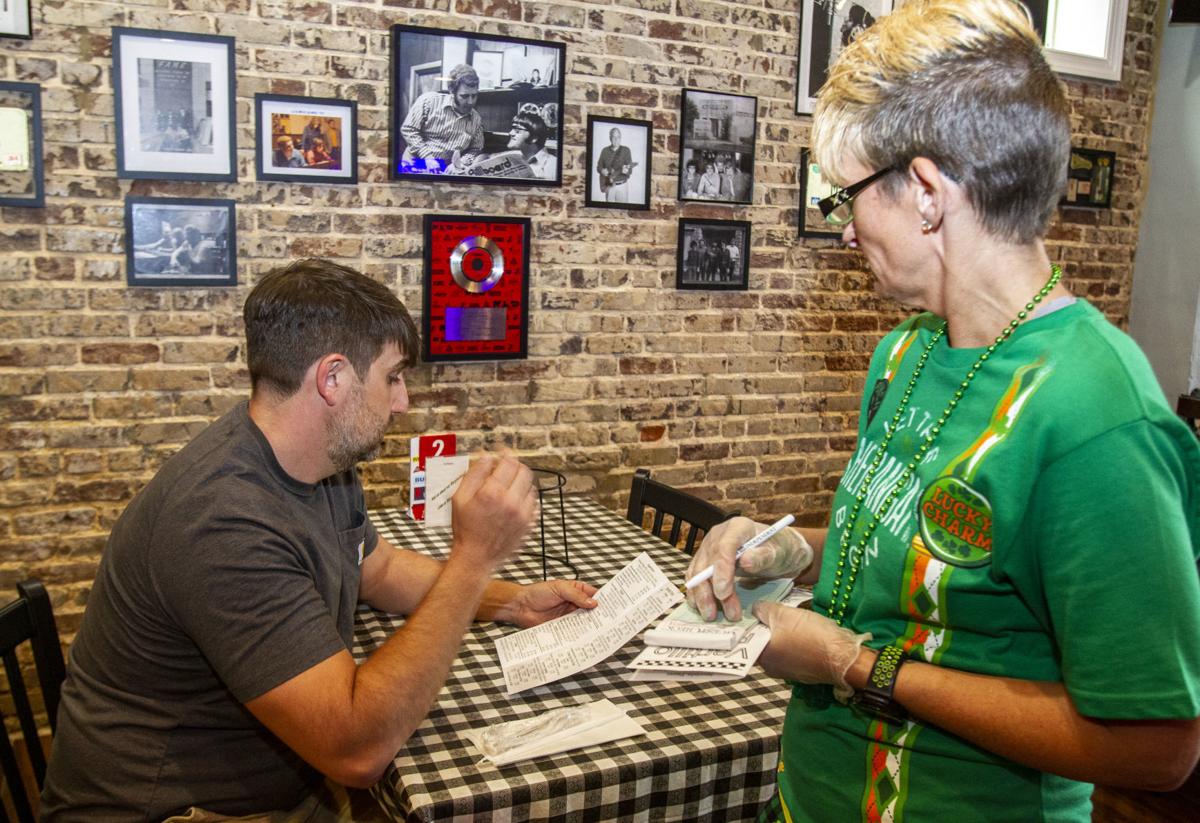 Wendy Cottingham takes an order at Vertillo Pizza in Sheffield. Owner Marlene Patrick said the restaurant has started using paper plates, plastic utensils and paper menus that can be thrown away. Servers are wearing plastic gloves to protect themselves and customers. [CAROLINE OGLESBY/ TIMESDAILY] 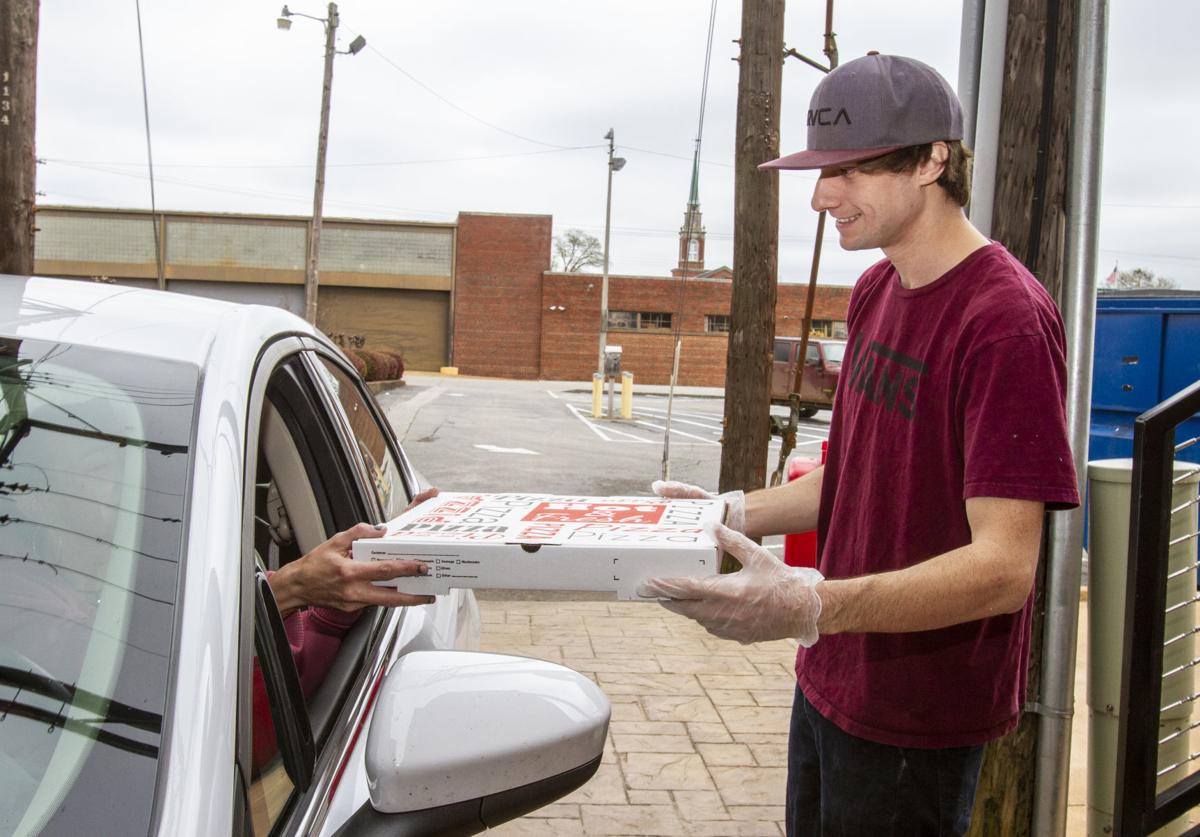 Ryan Patrick hands a drive-thru customer a box of pizza behind Vertillo Pizza in Sheffield. Owner Marlene Patrick said the restaurant has opted to hand deliver call-in orders to the vehicles of customers as a safety precaution measure. [CAROLINE OGLESBY/ TIMESDAILY]

Wendy Cottingham takes an order at Vertillo Pizza in Sheffield. Owner Marlene Patrick said the restaurant has started using paper plates, plastic utensils and paper menus that can be thrown away. Servers are wearing plastic gloves to protect themselves and customers. [CAROLINE OGLESBY/ TIMESDAILY]

Ryan Patrick hands a drive-thru customer a box of pizza behind Vertillo Pizza in Sheffield. Owner Marlene Patrick said the restaurant has opted to hand deliver call-in orders to the vehicles of customers as a safety precaution measure. [CAROLINE OGLESBY/ TIMESDAILY]

Local governments in the Shoals are leaving it up to individual business owners to determine if they will shut their doors or remain open during the coronavirus pandemic.

In Florence, Wildwood Tavern, On The Rocks and Mefford Jewelers have decided to temporarily close, while Ricatoni's Italian Grill, City Hardware and Legends Steakhouse have decided to remain open, but are utilizing social distancing to keep patrons separated.

Claunch Cafe in Tuscumbia has temporarily closed, but Vertillo Pizza and Grill in Sheffield will remain open.

Marlene Patrick and her husband only opened Vertillo Pizza and Grill in downtown Sheffield nine months ago. They relocated the popular restaurant from Thorsby.

Patrick said they're using paper plates, plastic utensils and paper menus that can be thrown away. Servers are wearing plastic gloves to protect themselves and customers. They will also deliver call-in orders to the vehicles of customers.

"We're going to have to take the precautions," Patrick said. "We were open on Sunday, and it didn't pay for me to open — it was that bad."

He said the two restaurants are focusing on take-out business and seating people away from each other.

"If room is available, we're spreading them out," Elliott said.

He said his restaurants have also closed an hour earlier the last couple of nights.

If he does decide to close the dining rooms, Elliott said he would still offer some type of take-out menu.

Officials with Sweet Peppers Deli in Muscle Shoals said at this time the dining room will remain open. Curbside pickup is available as well for customers calling in or placing orders online.

Chris Claunch, of Claunch Cafe, said he closed his restaurant for the remainder of the week for the safety of employees and customers.

"We always take off the week of spring break, so the timing works out OK for us," he said. "We will reassess the situation after spring break and, hopefully, the pandemic will be under control by then."

Johnny Fleeman, owner of Legends Steakhouse, has seen his business dip 30% to 40% in the past couple of days. The restaurant in downtown Florence remains open, but customers will be separated.

Fleeman said he spoke to a Quick Mart employee recently, who said their business was off about 30%.

"It's kind of across the board," he said. "Being independent, I've got obligations I've got to meet, and I can't meet them being closed. Right now, we're just kind of playing it by ear to see if it will get worse or not."

He is also seeing more people opting for take-out orders. With some churches cancelling services, people are not going out to eat after church, Fleeman said.

Patrick said closing Vertillo's Pizza would be devastating to her and her five employees.

Walmart stores that were open 24 hours a day have begun closing at 11 p.m. and reopening at 6 a.m.

Target has announced that all stores will close by 9 p.m. to provide employees additional time for cleaning and restocking each day.

Target also announced it will introduce a dedicated shopping hour every Wednesday morning for vulnerable guests.

Effective now, all AMC theater locations in the country are closed for a period of at least six to 12 weeks. AMC Stubs A-List memberships will be paused automatically during the time AMC Theaters are closed.

The Alabama ABC Board has comprised a list of 78 stores that will be temporarily closed, and most of those that remain open will have reduced hours of operation.

Both the Florence (4140 Florence Boulevard) and Sheffield (508 East Second St.) stores will remain open according to the most recent plans, but officials say plans are subject to change as circumstances warrant.

The ABC stores that remain open will operate from noon to 7 p.m. with the exception of wholesale only stores, whose hours will remain the same.

Special protocol has been enacted, beginning today for stores to act as over-the-counter only to keep as much distance as possible between patrons and store personnel.

There will also be a five customer limit inside the store at any given time. Customers will not be allowed to pull their own product, but must place the order while the employee retrieves the product for checkout.

Customers are asked to pay for their purchase with a credit card if possible. Employees will also be required to wear gloves, and masks are optional at this time.

Yum Brands, which owns Pizza Hut, KFC and Taco Bell restaurants, is closely monitoring the pandemic and has instituted strict guidelines for safety.

CEO David Gibbs said the company is following the guidance of the World Health Organization, the  U.S. Centers for Disease Control and Prevention, the U.S. Department of State, and other similar organizations in countries where they operate to ensure we have the best plans in place to protect their employees and customers.

"First and foremost, we and our franchisees have industry-leading action plans, standards and policies in the restaurants to prevent and limit the spread of COVID-19," Gibbs said. "Our Global Food Safety team has reinforced our already stringent protocols in all restaurants emphasizing prevention, hygiene, cleaning and sanitation."

Measures include increasing the frequency of cleaning and sanitizing throughout the restaurants, and focusing on sanitizing high-touch areas such as front counters, pin pads, tables, trays, etc.

Hand sanitizer is being made available in the stores for employees and customers.

Restaurants are not the only businesses that have closed.

Mefford Jewelers owner Russell Mefford said the downtown Florence store has closed until further notice due to concerns about the virus.

"My gut tells me this is what I should do," Mefford said in a post on the business' Facebook page. "We will probably never know, but if making this sacrifice saves one life, or frees up one hospital bed, then it will be worth it in my heart and in my head."