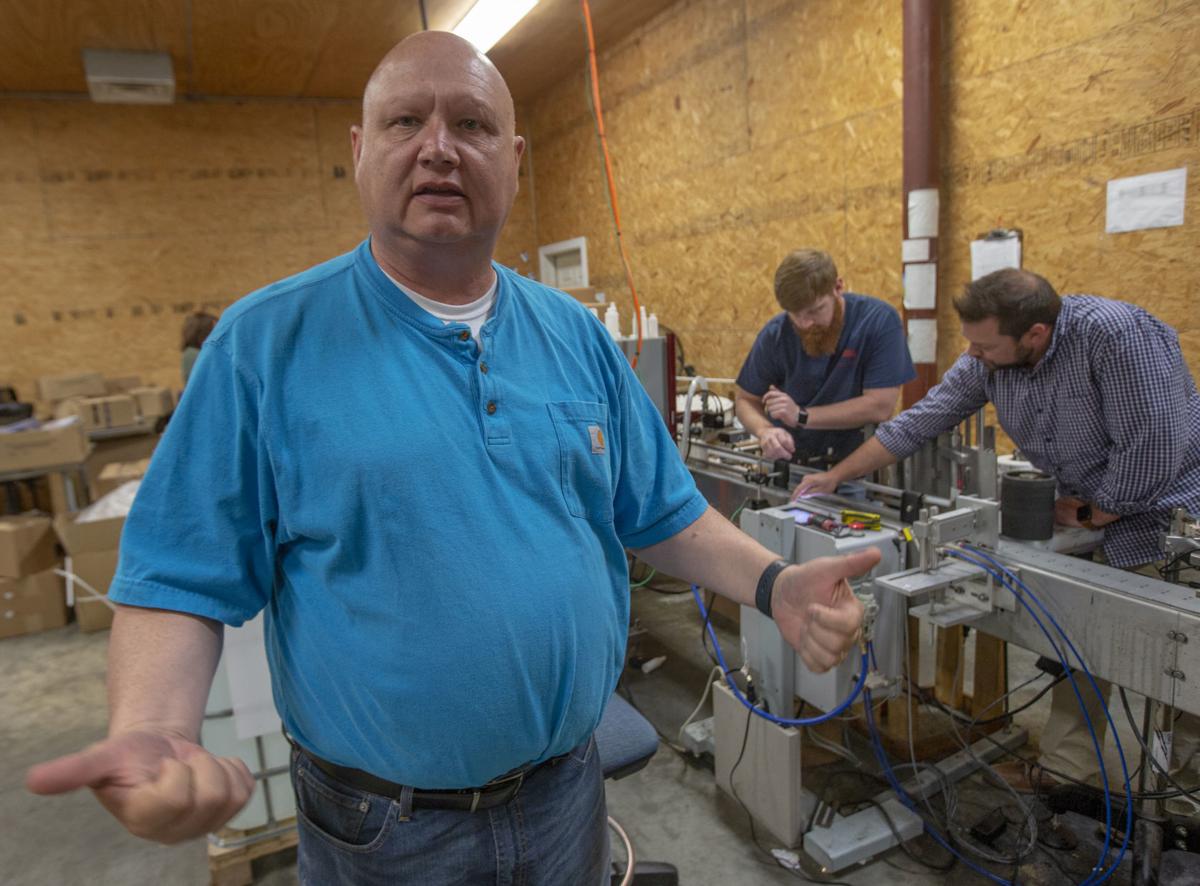 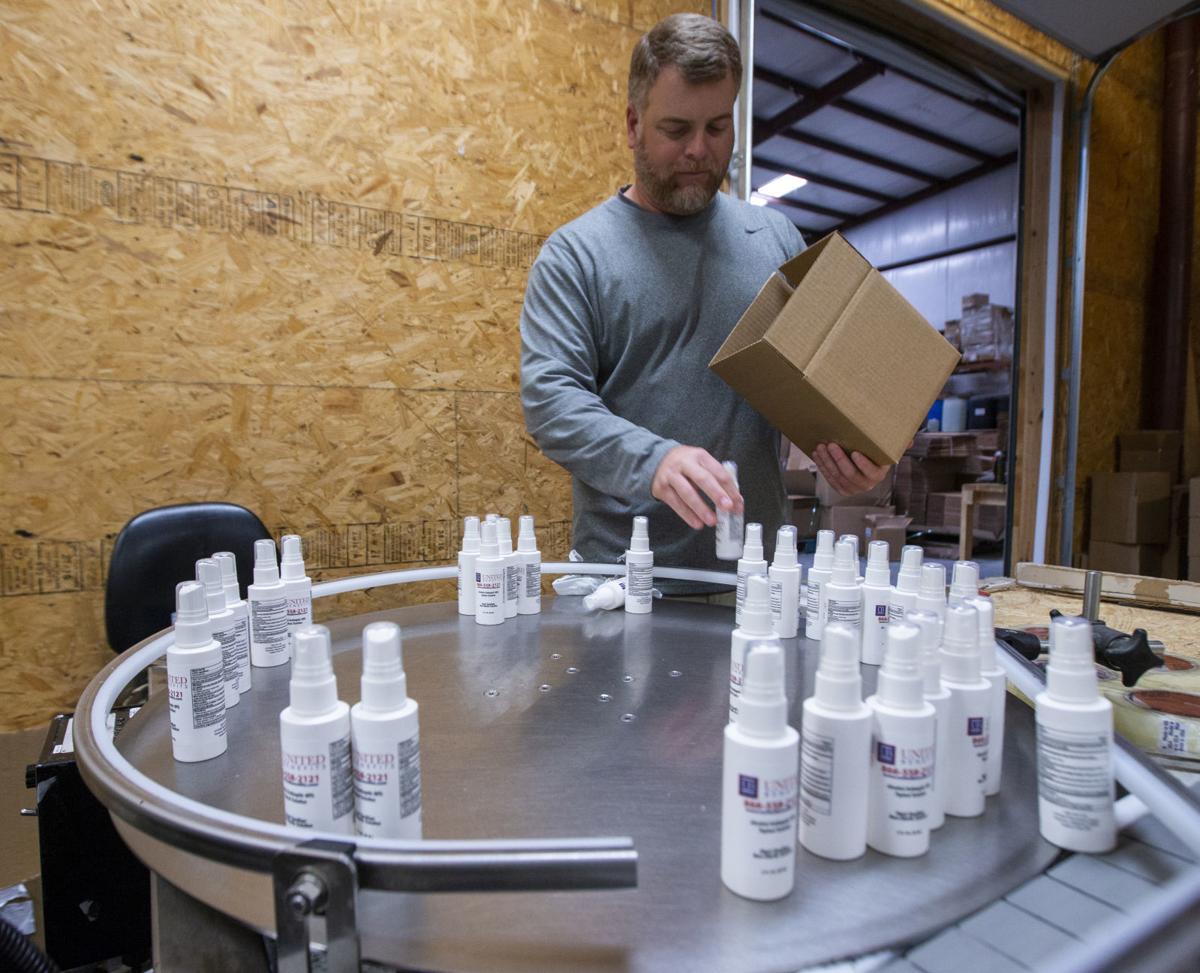 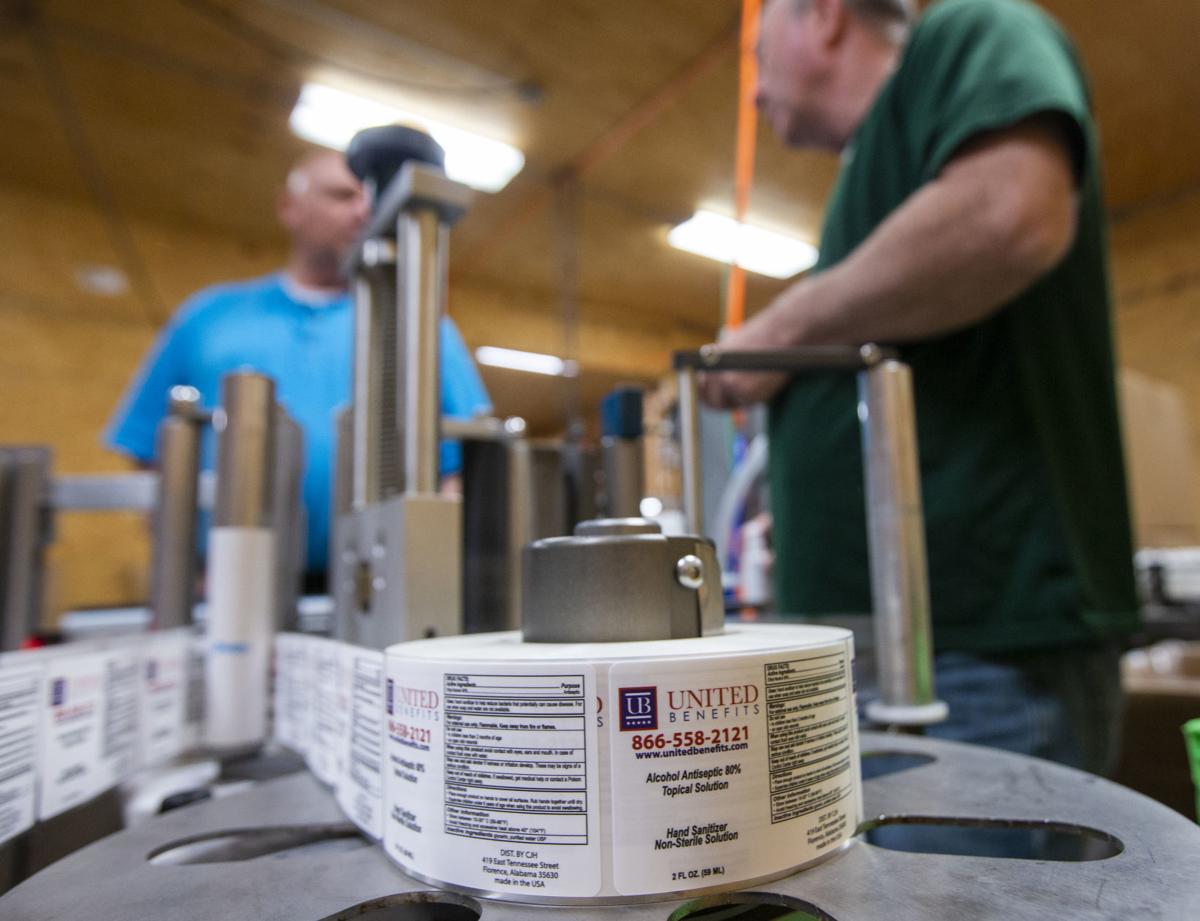 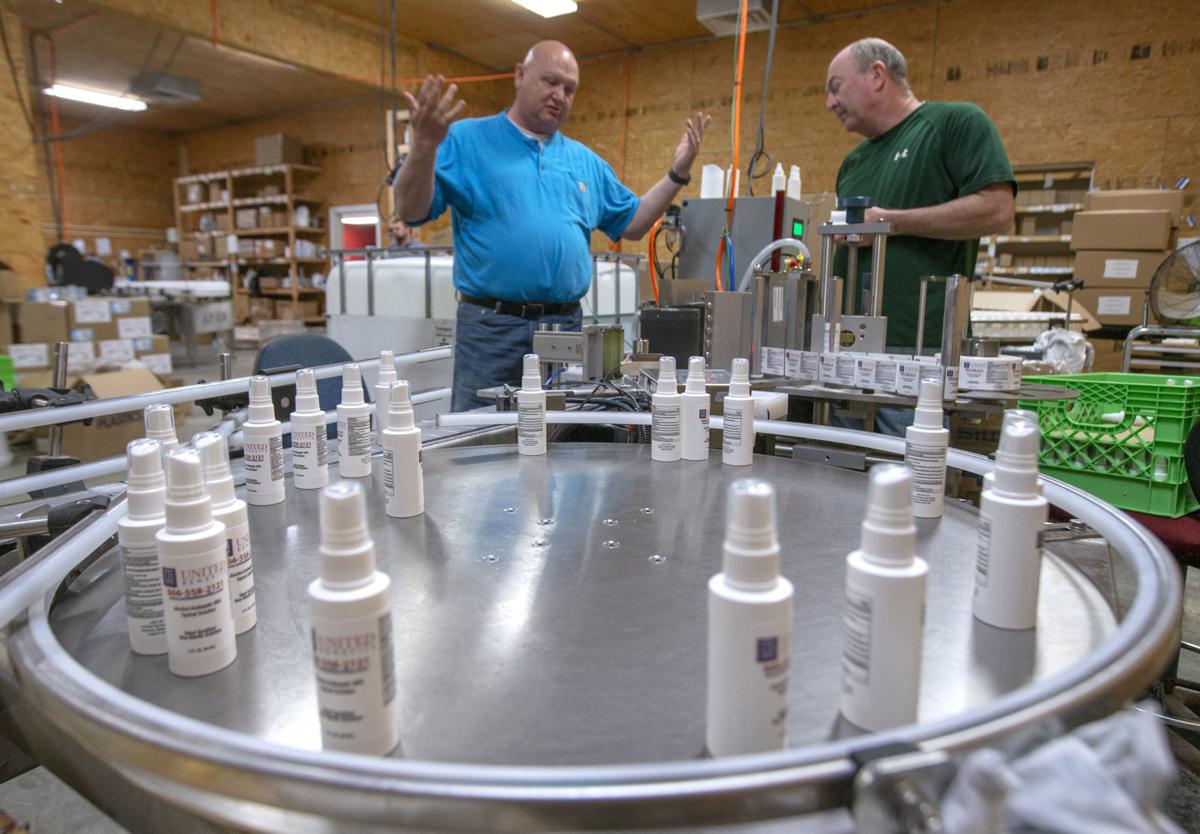 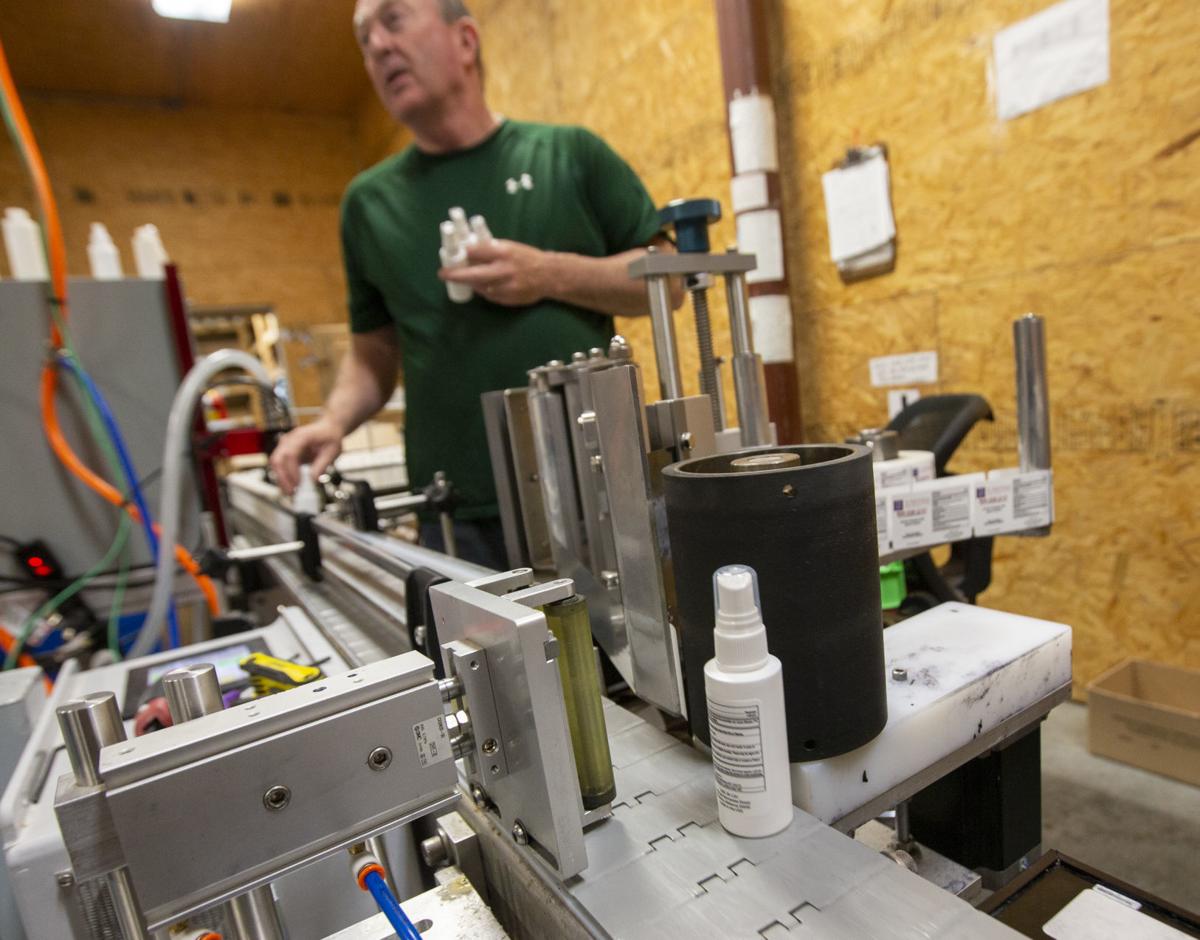 Barry McFall places bottles of hand sanitizer in line for labels at Gineisis Natural Products plant in Waterloo. The company is bottling sanitizer to battle the coronavirus pandemic. [MATT MCKEAN/TIMESDAILY] 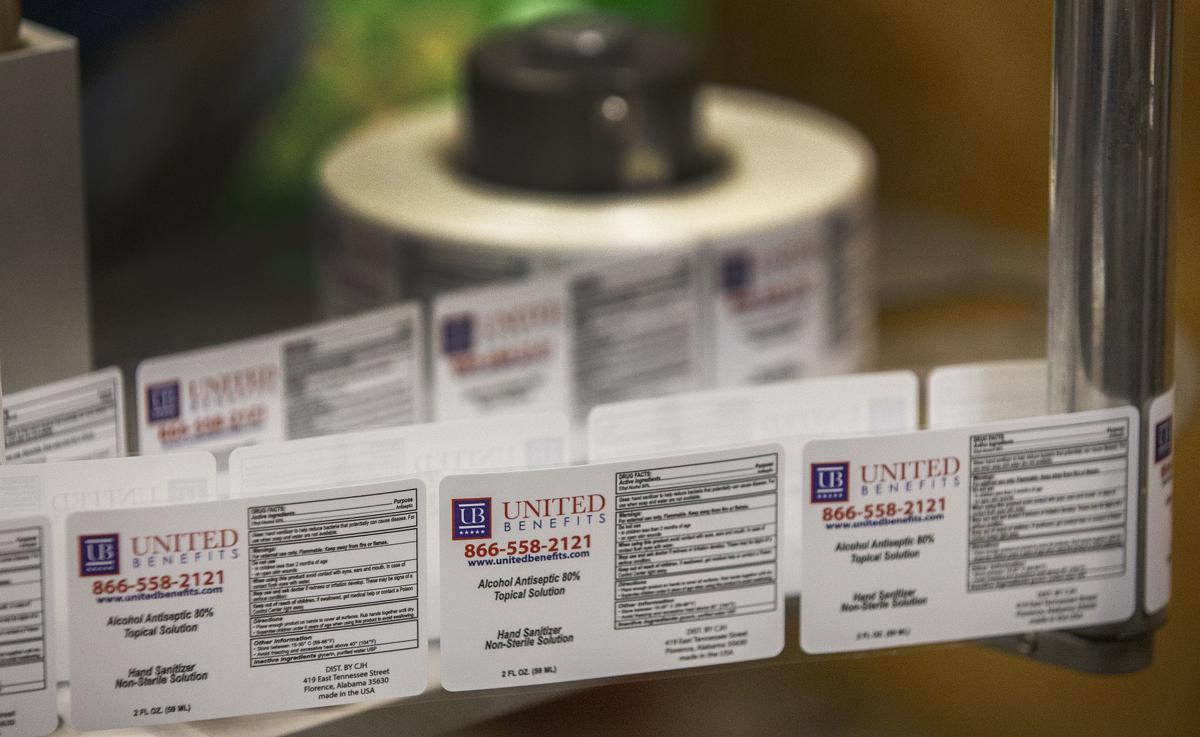 Hand sanitizer bottle stickers move from a roll to be placed on bottles at Gineisis Natural Products plant in Waterloo. The company is bottling sanitizer to battle the coronavirus pandemic. [MATT MCKEAN/TIMESDAILY] 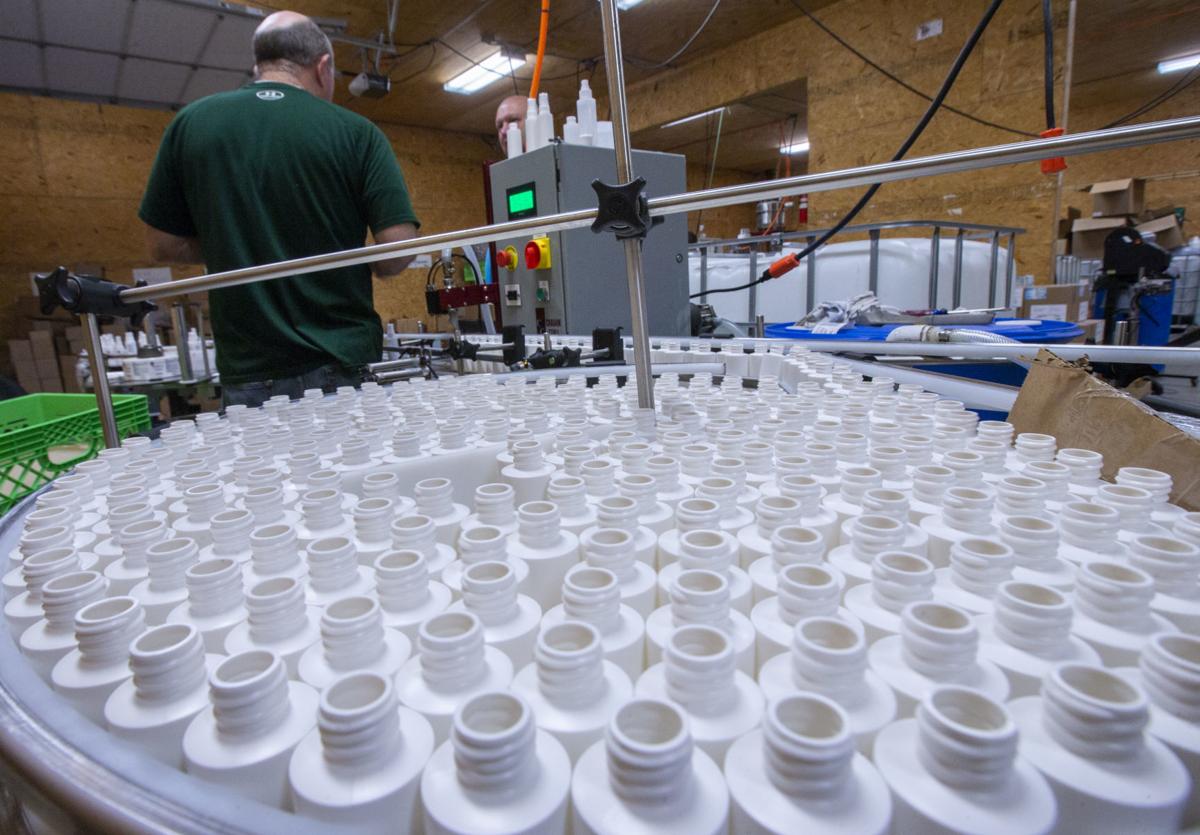 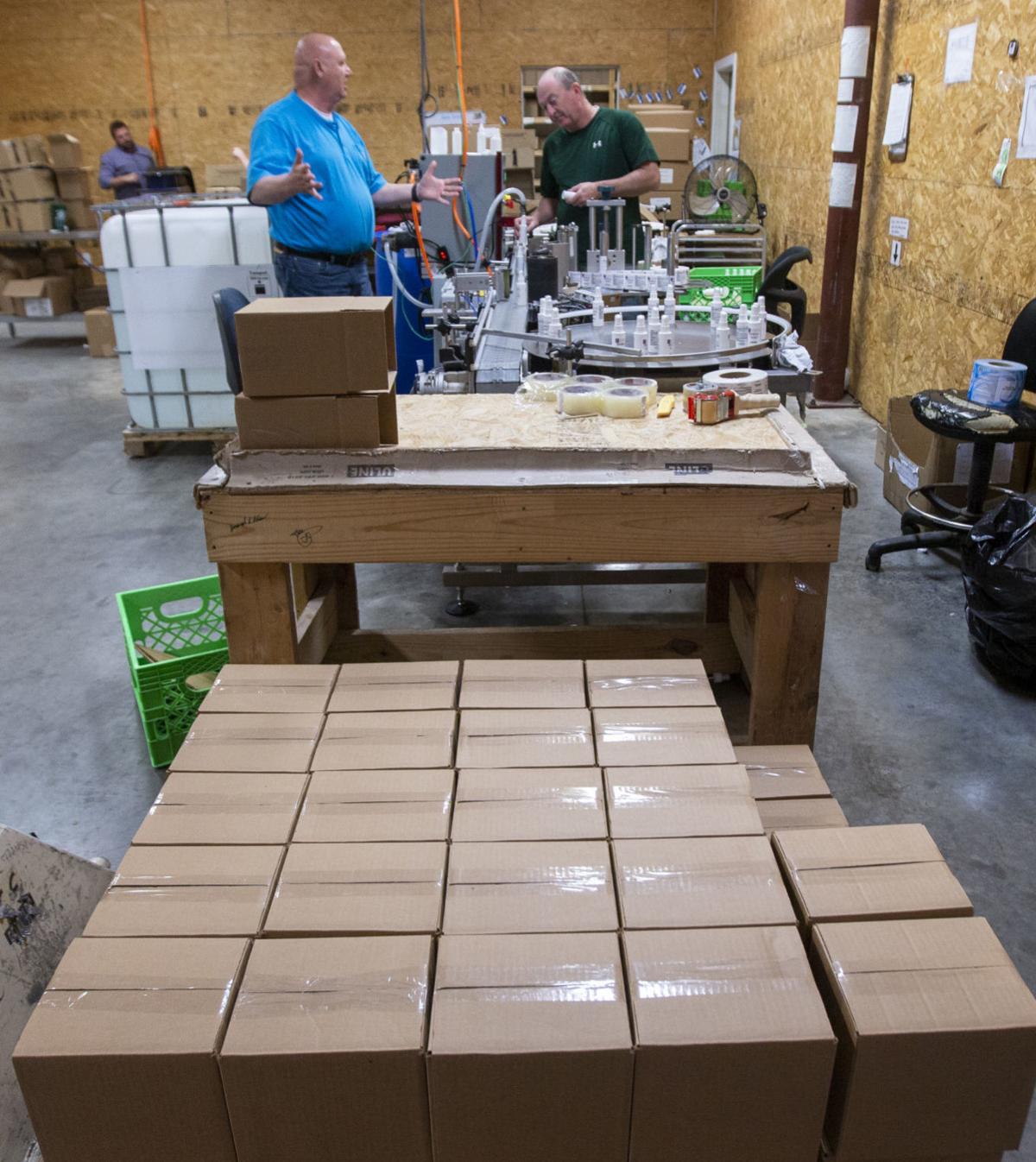 Barry McFall places bottles of hand sanitizer in line for labels at Gineisis Natural Products plant in Waterloo. The company is bottling sanitizer to battle the coronavirus pandemic. [MATT MCKEAN/TIMESDAILY]

Hand sanitizer bottle stickers move from a roll to be placed on bottles at Gineisis Natural Products plant in Waterloo. The company is bottling sanitizer to battle the coronavirus pandemic. [MATT MCKEAN/TIMESDAILY]

WATERLOO — When the pandemic started, local municipalities were struggling to find hand sanitizer to combat the virus.

"We were all scrambling trying to get any hand sanitizer," Florence Mayor Steve Holt said.

"Jeff said 'I can make it,'" Holt said. "He needed a federal permit, and I put him in touch with Congressman (Mo) Brooks and they helped him get squared away and he was ready to go."

Hester said production started April 9, and the company has produced about a million bottles so far.

"The state asked me not to produce the gel because it takes much longer to manufacture," he said. He got the recipe from the FDA website and produces it by their regulations. "The label is off the FDA website," he said.

Marketed as Ginesis Hand Sanitizer, Hester said he is putting it in 8-ounce sprayer bottles. The active ingredient is 80% ethanol alcohol.

"Mine looks like a hair spray bottle," he said. "As soon as you spray (it) on your hands (the virus) goes away."

But don't call the company asking to buy it from them — Hester said he only sells to businesses and people who have a retail certificate.

"Our biggest account is the Alabama Department of Public Health and the Alabama Emergency Management Agency. He also provides the product for Mitchel Grocery Corp., which is a grocery wholesaler that stocks the product — on Woodward Avenue in Muscle Shoals, Darby Drive in Florence and Alabama 101 in Rogersville.

"When the COVID-19 hit the surrounding cities we service, stores were calling, needing sanitizer," said Donna Dean, bakery/deli director at Mitchel Grocery. She said one of the store managers in Florence knew Hester. She contacted Hester and said "he was able to provide Mitchell with the hand sanitizer and within two days of ordering we had the product in our warehouse."

Hester said his company also produces a surface sanitizer for use in machines.

"It's like a leaf blower that blows out sanitizer," Hester said, adding that the machines are used for sanitizing whole facilities.

"It gives people the confidence to go back in their facility and stay there," he said. "The facility is totally sanitized."

Hester said the surface sanitizer helps deter the spread of the disease by killing the virus so shoes don't pick it up.

"One of the biggest ways to get COVID-19 is on the bottom of your shoe because if you've got it and you don't know you've got it, you leave a trail of that disease," he said. "It falls on the ground and your shoes pick it up."

He said people should never touch the bottom of their shoes.

"(Touching) the bottom of the soles of your shoes is one of the main ways you can catch the virus," he said.

One of the biggest stumbling blocks to production has been the availability of bottles because those bottles are made in China. He said there are a lot of American manufacturers that send their molds to China because it's cheaper to make them there.

"It's a major problem in the USA," Hester said. "They shut down for three months and now we can't get stuff."

He said he has no plans to shut down production of the products after the pandemic is over and said he believes the pandemic "is going to be with us for a long period of time."

Holt said Ginesis and Singing River Brewery, which also produces sanitizer, are good examples of "local businesses stepping up to do what's needed to be done for a time for our country."

"It really helped us locally," he said. "We had nowhere to go. We couldn't find any. Now we can."

The virus is on the bottom of our shoes?! The life of the virus is only a few hours, according to media reports based on clinical studies, unless it falls on hard surfaces. If we are spreading it by walking around then it has to be continuously growing in the air around us. Maybe there is some validity to those stories of the past about con-trails from high flying military jets. Just what is in those vapor trails?