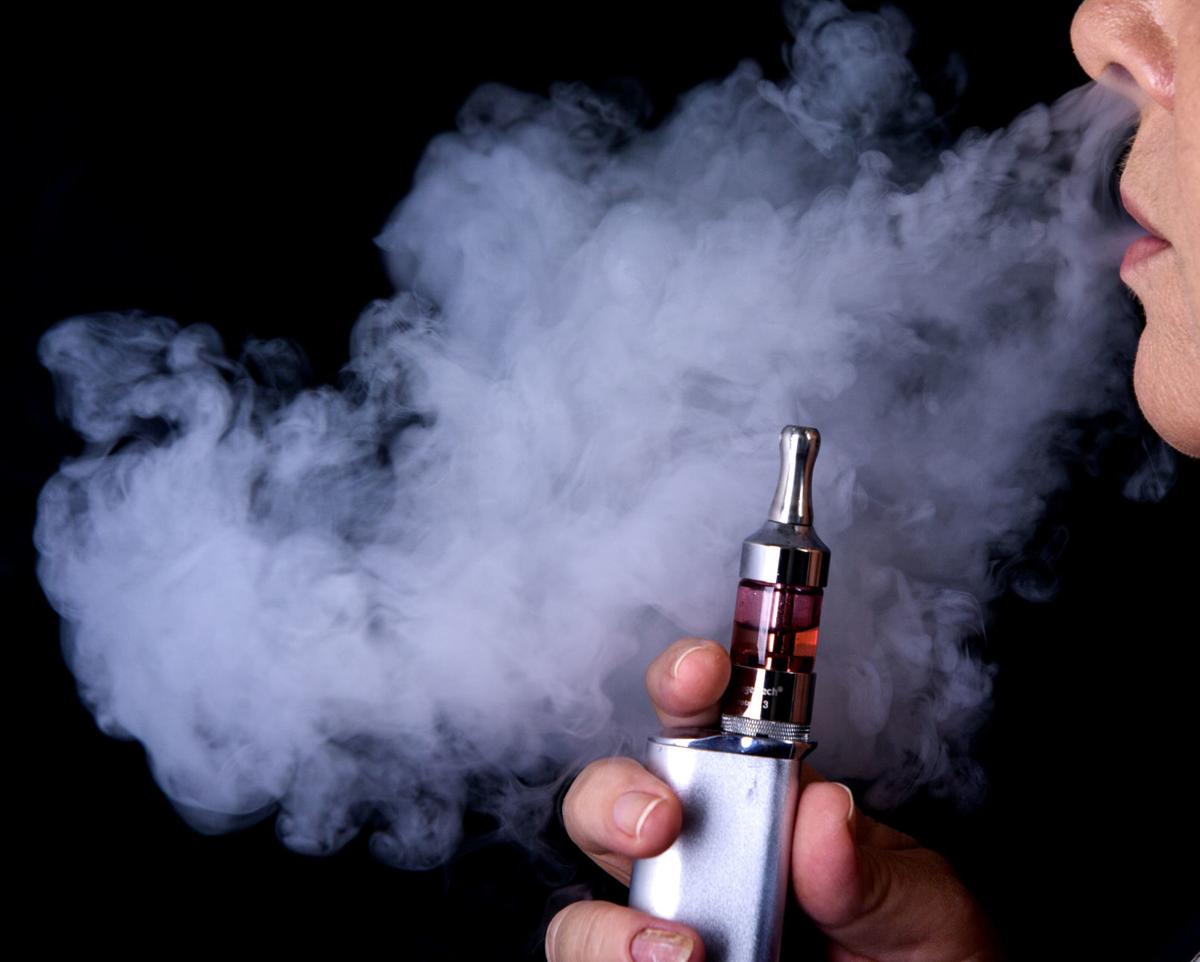 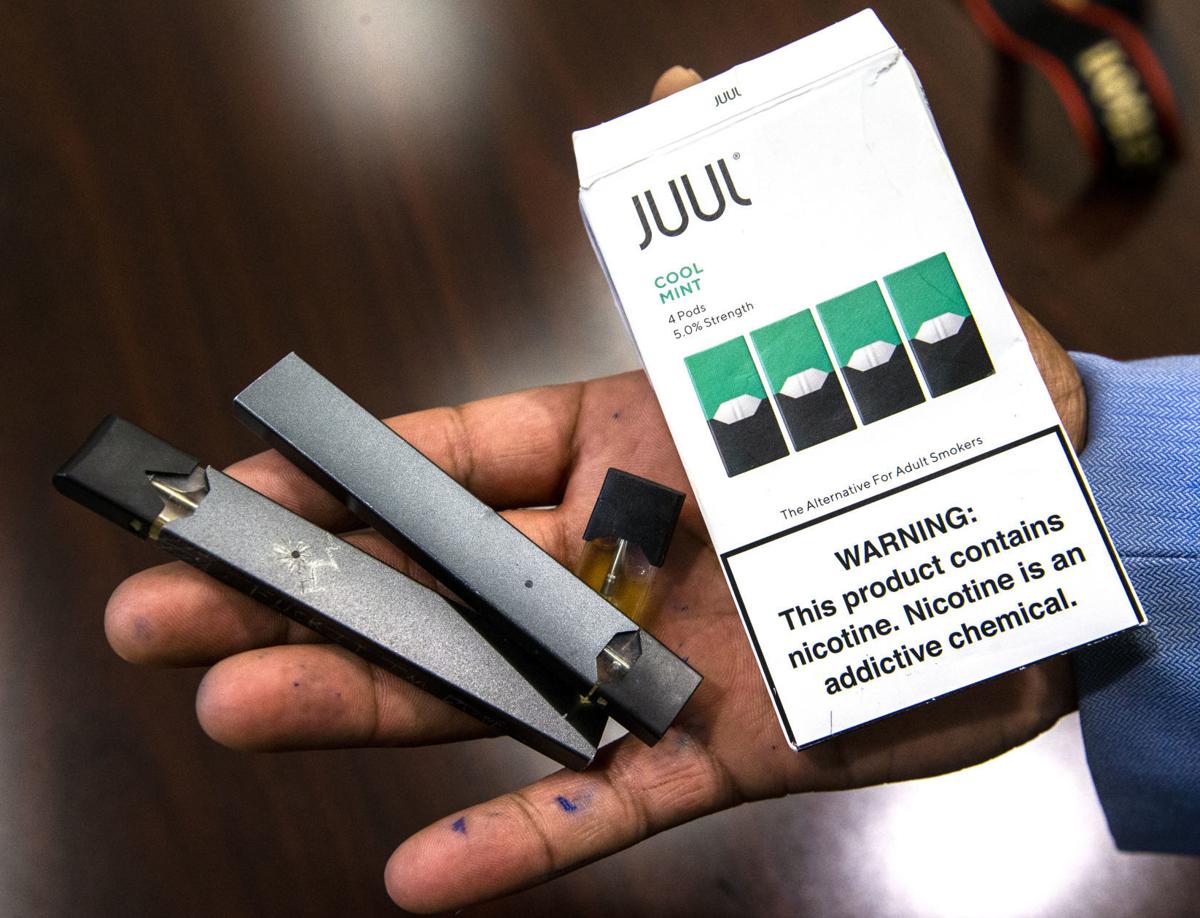 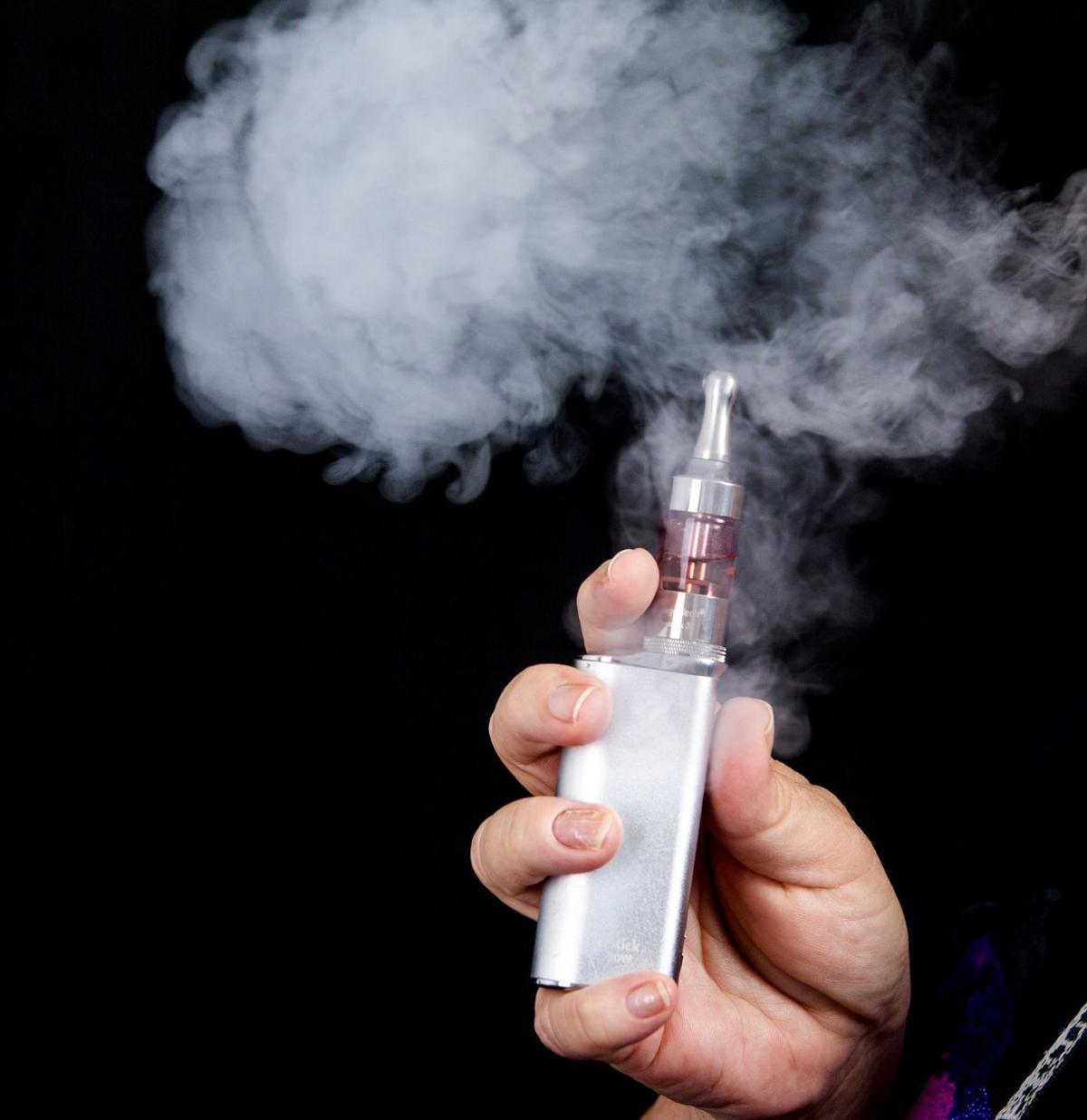 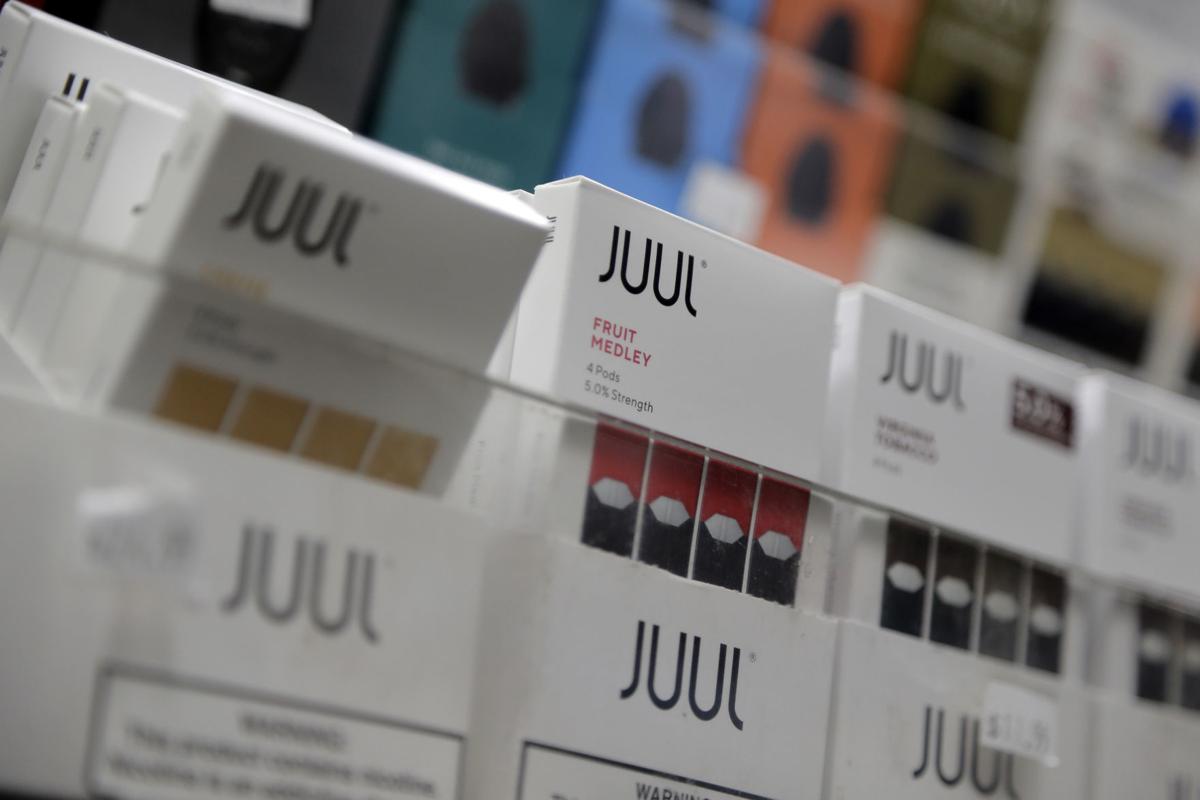 In this image, Juul products are displayed at a smoke shop in New York. Federal health authorities say vaping giant Juul Labs illegally promoted its electronic cigarettes as a safer option to smoking, including in a presentation to school children. (AP Photo/Seth Wenig, File)

In this image, Juul products are displayed at a smoke shop in New York. Federal health authorities say vaping giant Juul Labs illegally promoted its electronic cigarettes as a safer option to smoking, including in a presentation to school children. (AP Photo/Seth Wenig, File)

Some parents and teachers can see an e-cigarette and never know what it is, yet the devices are now in the cross hairs of medical and health professionals who blame them for six deaths and hundreds of cases of lung illness.

The devices are not allowed on local public school campuses, but because some of them are designed to look like USB flash drives, a parent or teacher can see one and not know what it really is. Some devices produce no visible vapor or scent, making it more difficult to detect their use among students.

Colbert County High School Principal Melcha Satchel said the devices are easier to conceal than a pack of cigarettes or a canister of smokeless tobacco.

“It’s something (students) can do in secrecy,” he said. “That’s causing an issue.”

“We’ve taken steps to prevent that as much as possible,” Parker said.

“(The) 2017-18 school year was when we saw a big spike in vapes,” he said. “They doubled last year and we’ve had four instances already this year. It’s frustrating. These kids are so brazen they’re doing it in the classroom. It’s a really disrespectful thing, not to mention what they could be doing to their health.

“The thing that concerned me the most was that students from all walks of life — boys and girls and kids across all demographics — were doing it and we knew so little about it. Now we know a little more than three years ago, but kids who’ve never picked up a cigarette are doing this because it seems cool. It concerns me for their health and well-being.”

Electronic cigarettes, or e-cigarettes, are battery-operated devices that typically heat a flavored solution into a vapor, which is inhaled. Inhaling the vapor is called vaping, or Juuling — a term taken from the trademark name of a popular brand of e-cigarettes.

The lure of these devices is understandable. Instead of the pungent, acrid smoke of traditional cigarettes, with its residual stale odor, e-cigarettes deliver a halo of vapor that quickly dissipates. The taste of the pods in the JUUL devices, for example, are anything but stale, with flavors that include “cool cucumber,” “fruit medley,” “mango,” and “mint.”

“These things have no odor or have a fruity odor and don’t make you stink and that’s appealing to kids,” he said.

Initially touted as a healthier alternative to traditional smoking, e-cigarettes have been blamed for 380 cases of lung disease associated with its use, according to information the Centers for Disease Control and Prevention emailed to the TimesDaily on Friday. Higher numbers of cases were initially reported because those cases were listed as “possible” and were still under investigation, according to the CDC statement.

Six deaths have been confirmed in six states as of Friday: California, Illinois, Indiana, Kansas, Minnesota and Oregon, according to the CDC.

Most troubling is the unknown: the specific cause of these illnesses and deaths. According to the CDC statement, “The investigation has not identified any specific e-cigarette or vaping product (devices, liquids, refill pods, and/or cartridges) or substance that is linked to all cases.”

Tackling the problem in schools

More than 3 million U.S. high school students used e-cigarettes in 2018, a 78% increase, according to the U.S. Food and Drug Administration.

Even before this latest health concern, e-cigarettes were considered unsafe for kids, teens and young adults because most contain nicotine, a highly addictive substance. According to the CDC, nicotine can harm adolescent brain development, which continues into the early to mid-20s. Also of concern is that young people who use e-cigarettes may be more likely to smoke cigarettes as adults.

Vaping is especially worrying to local school administrators and teachers who are charged with keeping their students safe and their campuses smoke free.

“To me, it is a new issue, yet it’s an old issue,” he said. “We’ve always had students who have tried to smoke at school.

"It's definitely something that's a great concern to us, because of the epidemic across the United States," Sheppard said. "We're talking to students about making sure to make good decisions about things to avoid that are a detriment to your body."

In the Lauderdale County School System, Wilson High School Principal Gary Horton garnered attention recently when he removed some doors from bathroom stalls to discourage vaping after a student reportedly became ill. The doors were replaced, but the challenge to stay alert to vaping on campus continues.

“It was a temporary solution to a problem that I felt like I needed to deal with for the safety of our kids because of the situation that occurred,” Horton said.

He said he saw a decline in vaping on campus after he removed the stall doors, which were in two boys’ restrooms.

“One week after that, to be honest, it slowed down,” he said.

Most local school policies don’t specifically address vaping, but include language that treats vaping violations the same as tobacco violations with the same penalties.

The Florence School System policy categorizes the possession, sale or distribution of tobacco and any “facsimiles thereof” as a Class II offense that applies to both students and adults on school property and at any school-sanctioned activity.

“The ‘facsimile’ of a cigarette allows us to be able to address vaping,” Shaw said.

Punishment can include detention and in-school suspension for the first offense.

Lauderdale County Schools policy prohibits the possession, distribution and sale of tobacco products anywhere on school property, on school buses and at any school event or trip. That also applies to electronic cigarettes, vape pens, hookah pens, e-hookah, vape pipes “and any similar type of device designed to deliver nicotine, flavor, and other chemicals via inhalation.”

“If they’re caught . . . they’ll go through the disciplinary process at each school,” he said.

Holden said officials are thinking of increasing the punishment.

“Last year we had 29 instances coded as tobacco, but 26 of them were vapes,” Holden said. “We have test kits that will determine if it has THC or CBD and they’re punished according to our drug policy. If nothing else, I hope this has gotten their attention.”

Tuscumbia schools Superintendent Darryl Aikerson said no students have been referred to his office for expulsion or suspension over vaping.

“We just don’t allow students to smoke or have any kind of e-cigarettes or smoking paraphernalia at all,” Aikerson said. “It’s part of our board policy.”

In Sheffield, Superintendent Keith Davis said that during the summer officials emphasized vaping in the school policy. It is now a “step above the tobacco product use at school.”

“Some vaping devices have been known to explode, so it’s a weapon in that case and has to be treated as such in our policy,” Davis said. “We take it seriously and expect our stakeholders to take it seriously."

Vic Wilson is executive director of the Council for Leaders in Alabama Schools (CLAS). The organization provides advocacy for positive legislation for schools and is a watchful eye for legislation affecting schools.

“This past year there was a bill regarding vaping that never got dealt with, but I expect it to come back strongly due to the preponderance of evidence related to vaping,” Wilson said. “It’s on everyone’s minds and the dangers associated with it are too great to ignore.”

Vaping and its potential dangers are being addressed at the national level, too.

On Monday, vaping giant Juul Labs was slapped in a letter from the Food and Drug Administration. The agency’s letter said the company had violated federal regulations because it has not received federal approval to promote and sell its vaping products as a healthier option. The FDA has been investigating Juul for months but had not previously warned the company, according to reports by the Associated Press.

President Donald Trump last week announced he is seeking a ban on nontobacco flavors of e-cigarettes. The Food and Drug Administration is working on guides to implement the ban, a process that could take several weeks to develop, according to media reports citing Health and Human Services Secretary Alex Azar.

Holden, in Muscle Shoals, said there’s a need not only for government involvement, but more parental oversight, too.

“The government is going to have to look at enforcement of kids being able to buy these things,” he said. “Establishments not following the law are contributing to the problem.”

He said the school has had “safety nights” where information about vaping is included.

“We’re putting a whole generation of kids at risk if we don’t push back on this,” he said. “We have to band together and fight this thing.”

“We learned some kids were doing it at home,” she said. “With that being the case, it’s even harder to fight it at school.”

She said the school district had 10 cases countywide last year of vaping and confiscating vaping devices.

“We’ve taken a more proactive stance and have gotten our school resource officers involved in learning more about it, like different types of vapes and flavors,” she said. “Our health care staff (school nurses) is taking it on as a concern and they’re responsible for the education of staff and students and parents. It’s a comprehensive problem and we all have to deal with it.”

Wilson said a bill addressing vaping will come before the Alabama Legislature.

“I anticipate there will be something on this very soon (and) we hope to be at the table at the beginning to draft positive legislation," Wilson said. "This can’t go undealt with.”

Horton, at Wilson High School, agrees. He said a permanent solution might include a combination of buying vape detectors, increasing visibility and providing more education about the dangers of vaping.

He said restrooms are likely the most common place students at any school go to vape during the school day. While briefly removing restroom stall doors had a momentary impact for a specific situation, he said he’s “trying to come up with a better solution.”

“I had preferred not to have the publicity because (vaping) is at all schools,” he said. “I just could not sit back and not do anything. Best solution? Maybe not. Temporary solution? Yes.

“I can’t stop it completely, but we’ll work on it.”