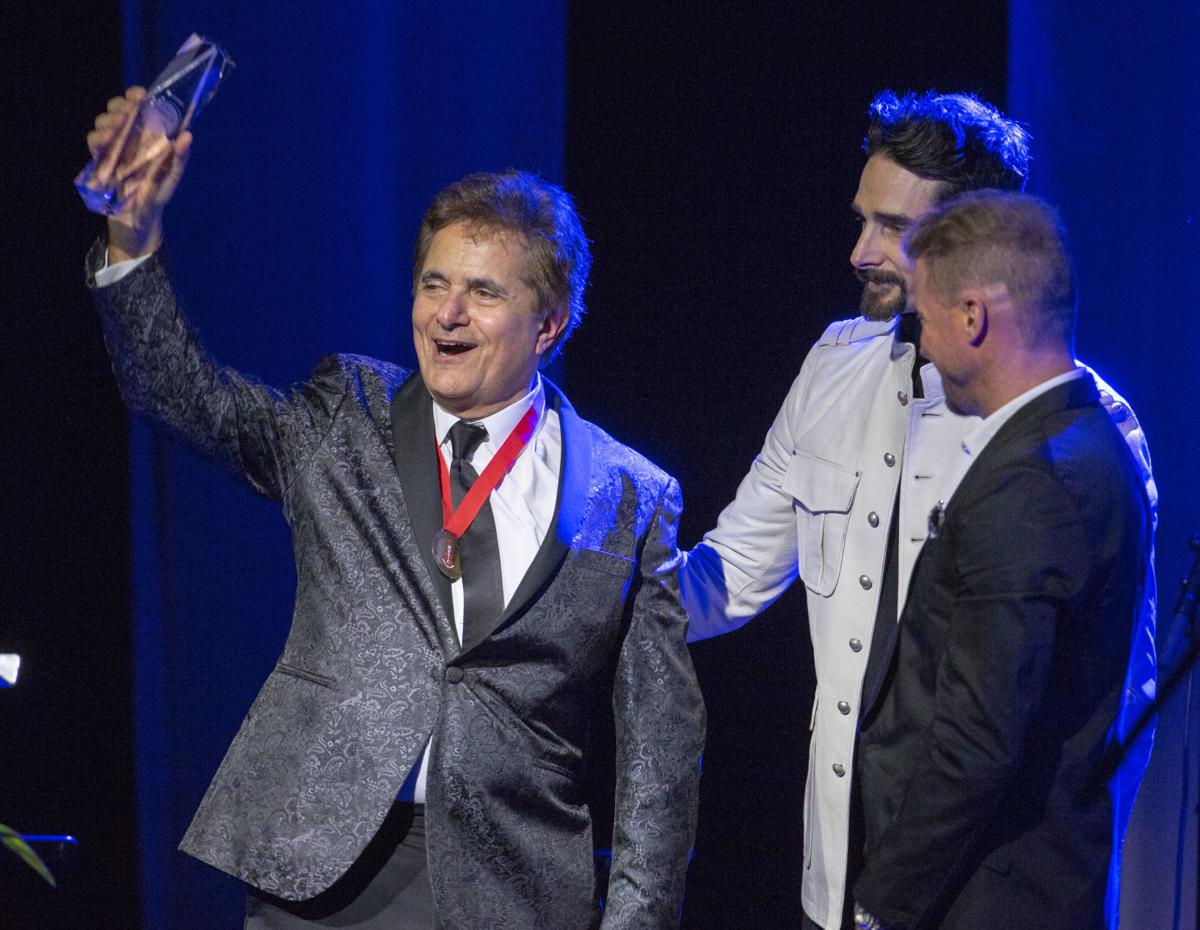 Inductee Gary Baker receives his award from Kevin Richardson and Brian Littrell of the Backstreet Boys at the Alabama Music Hall of Fame 2020 Induction Banquet at the Shoals Marriott Conference Center. [MATT MCKEAN/TIMESDAILY] 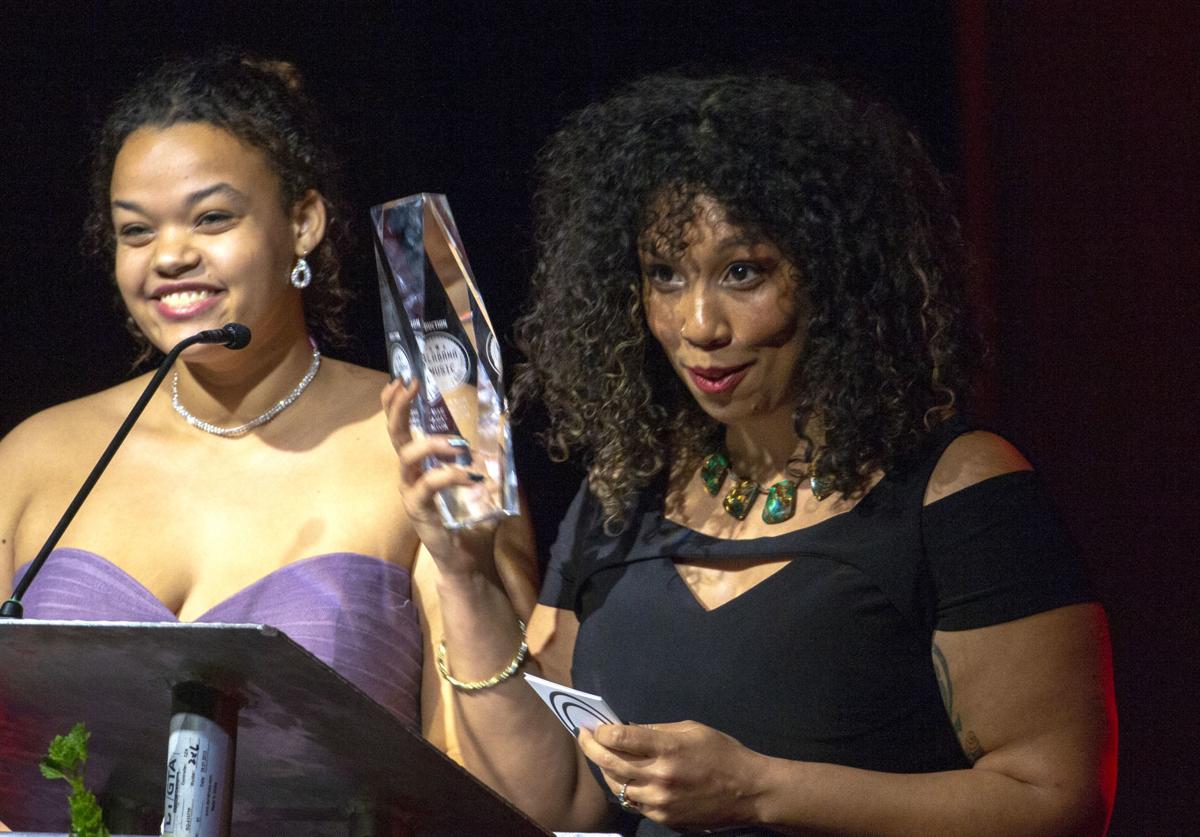 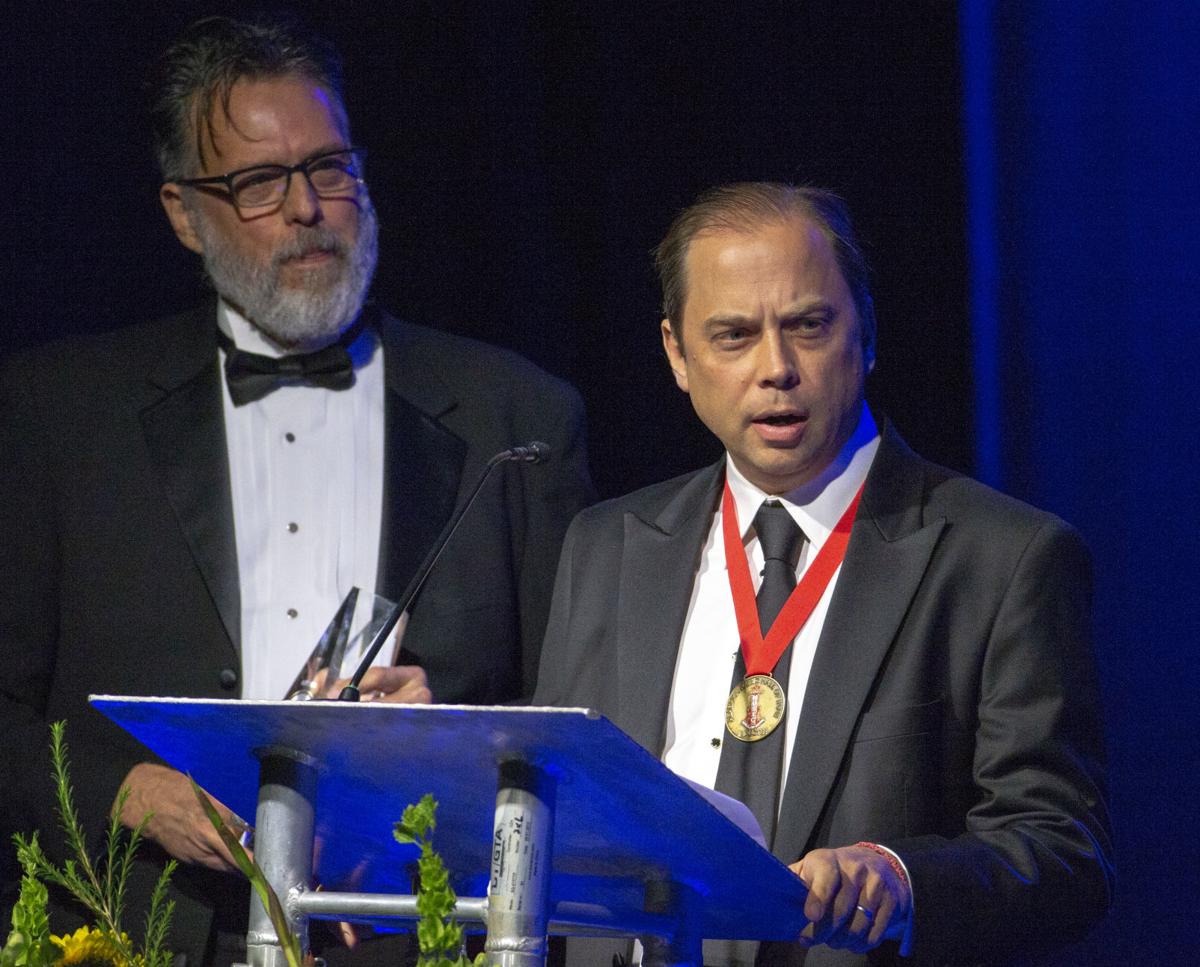 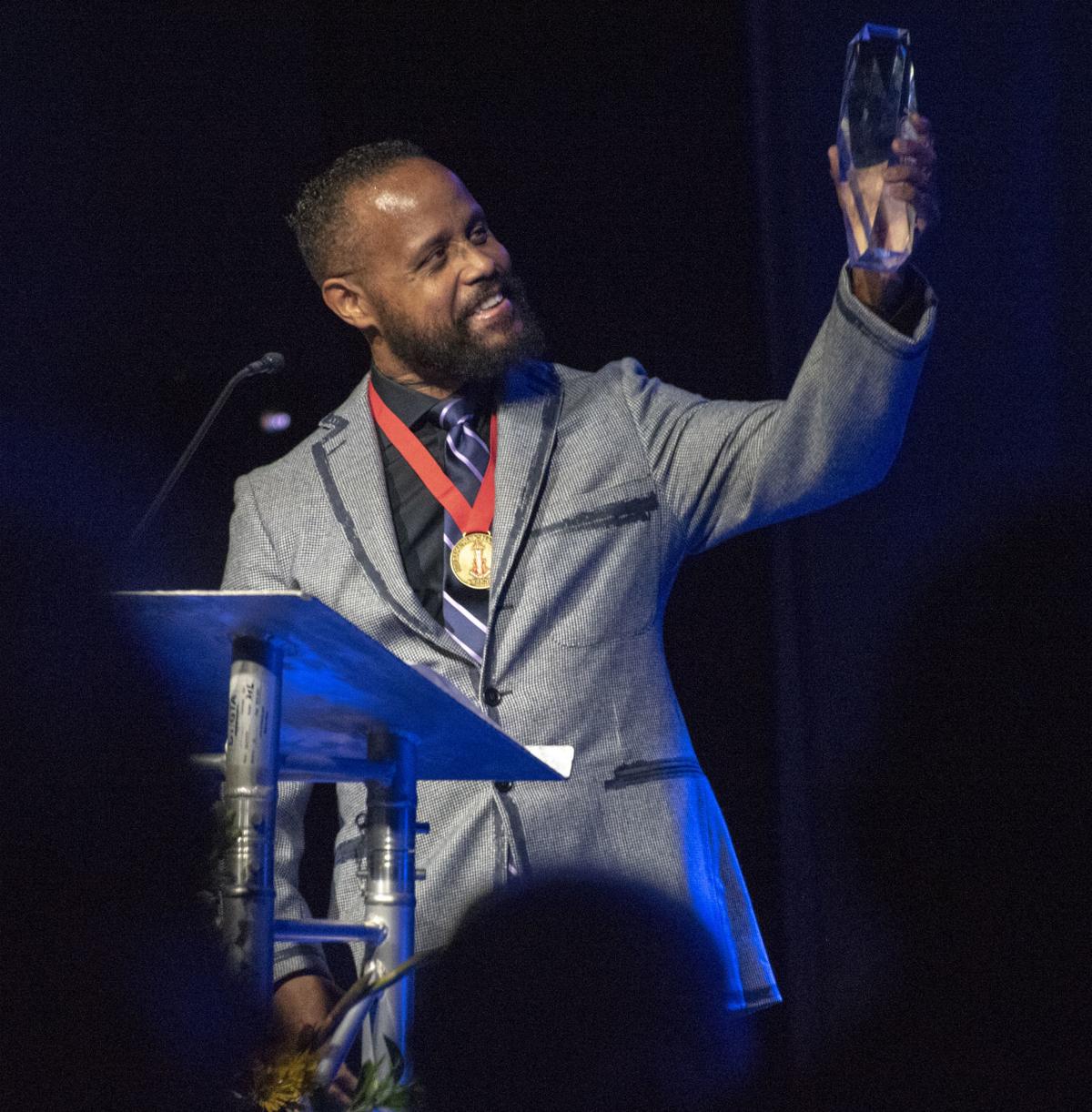 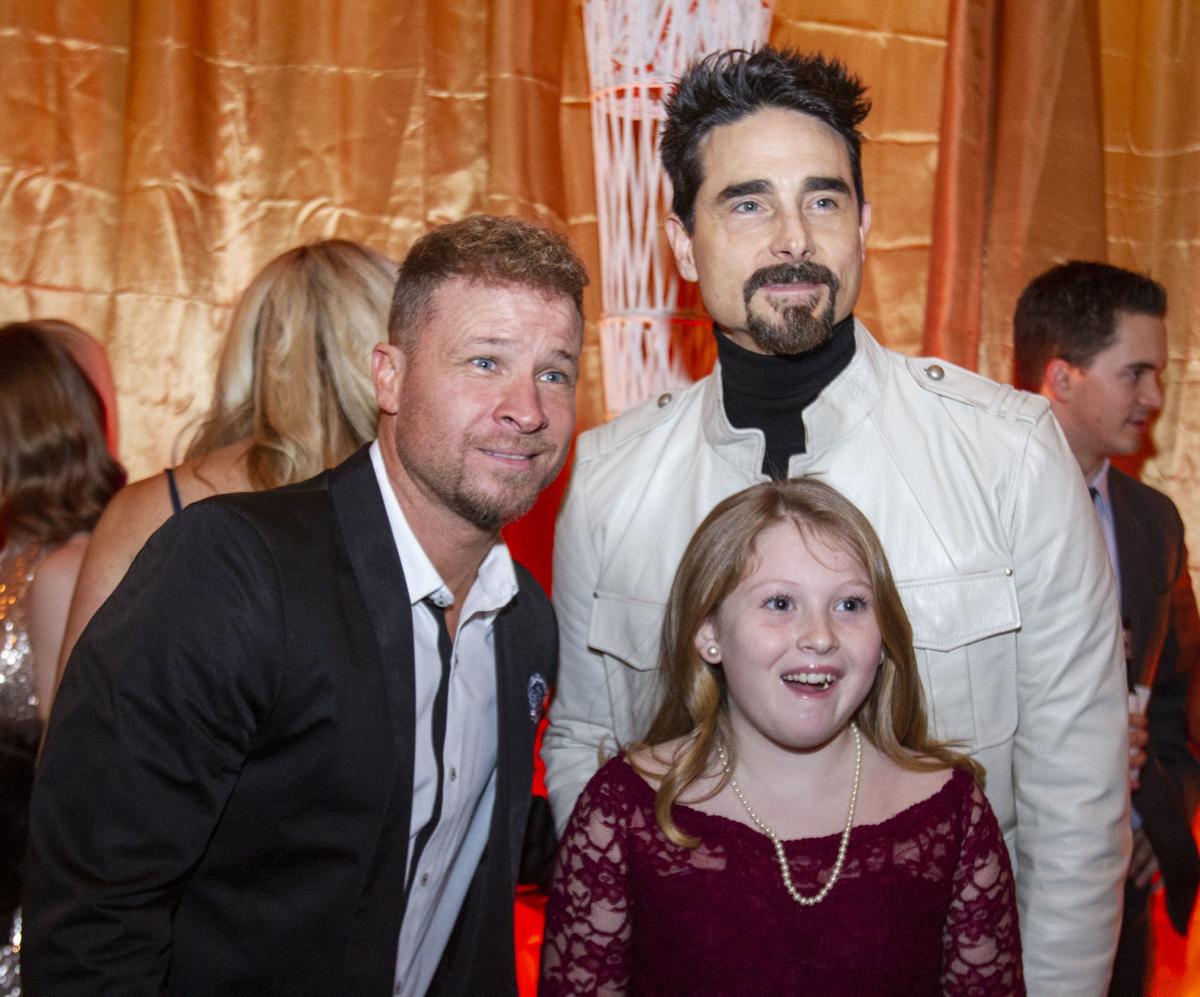 Scenes from the Alabama Music Hall of Fame 2020 Induction Banquet at the Marriott of the Shoals Conference Center.[CAROLINE OGLESBY/ TIMESDAILY] 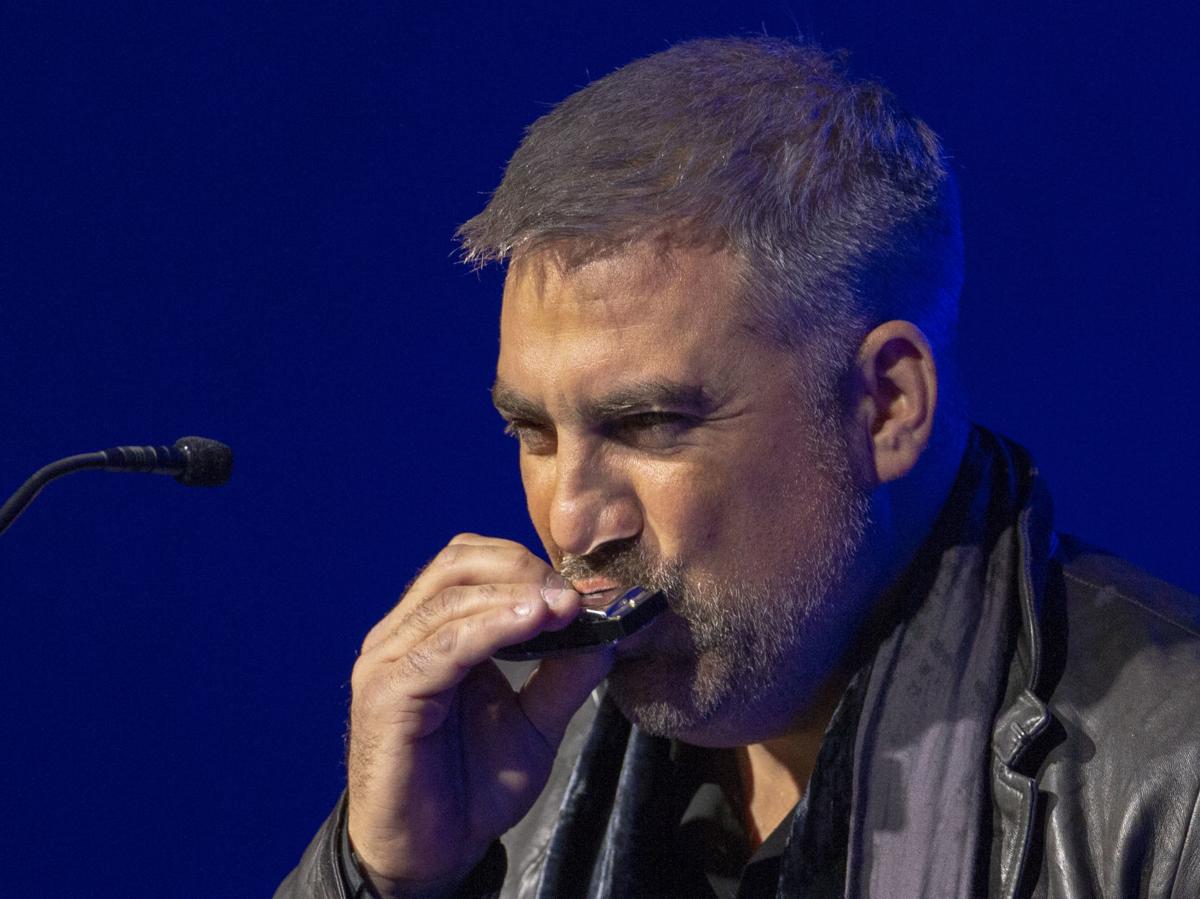 Taylor Hicks plays a harmonica as he comes to the podium at the Alabama Music Hall of Fame 2020 Induction Banquet at the Shoals Marriott Conference Center. [MATT MCKEAN/TIMESDAILY] 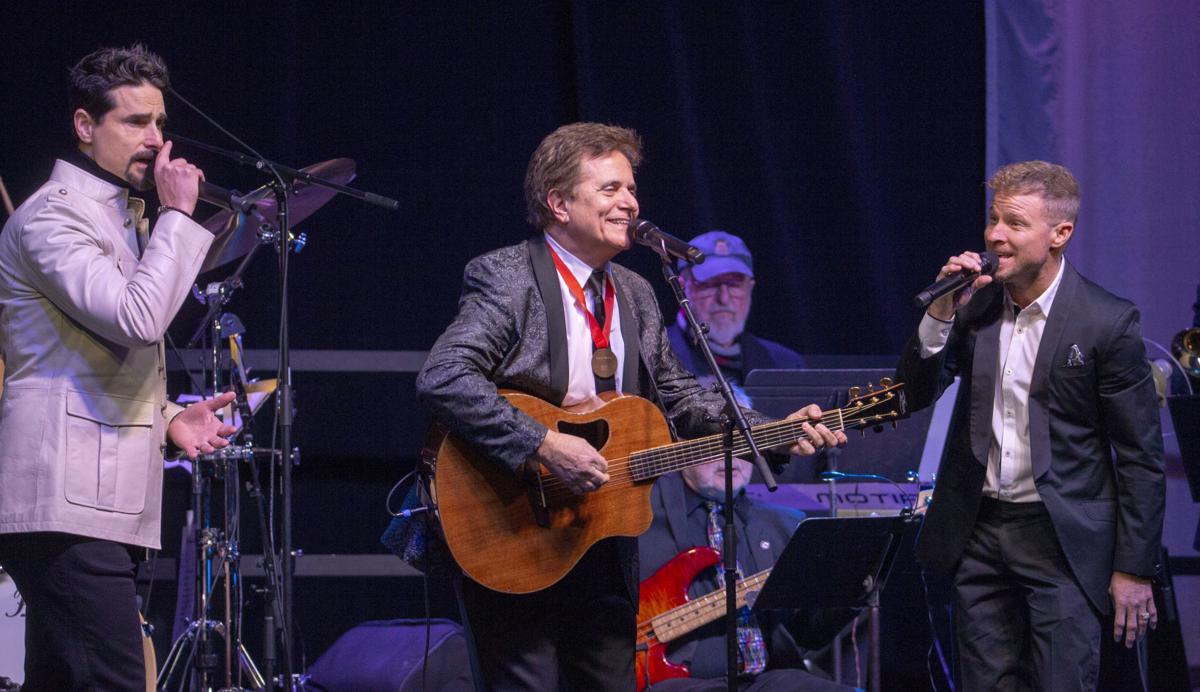 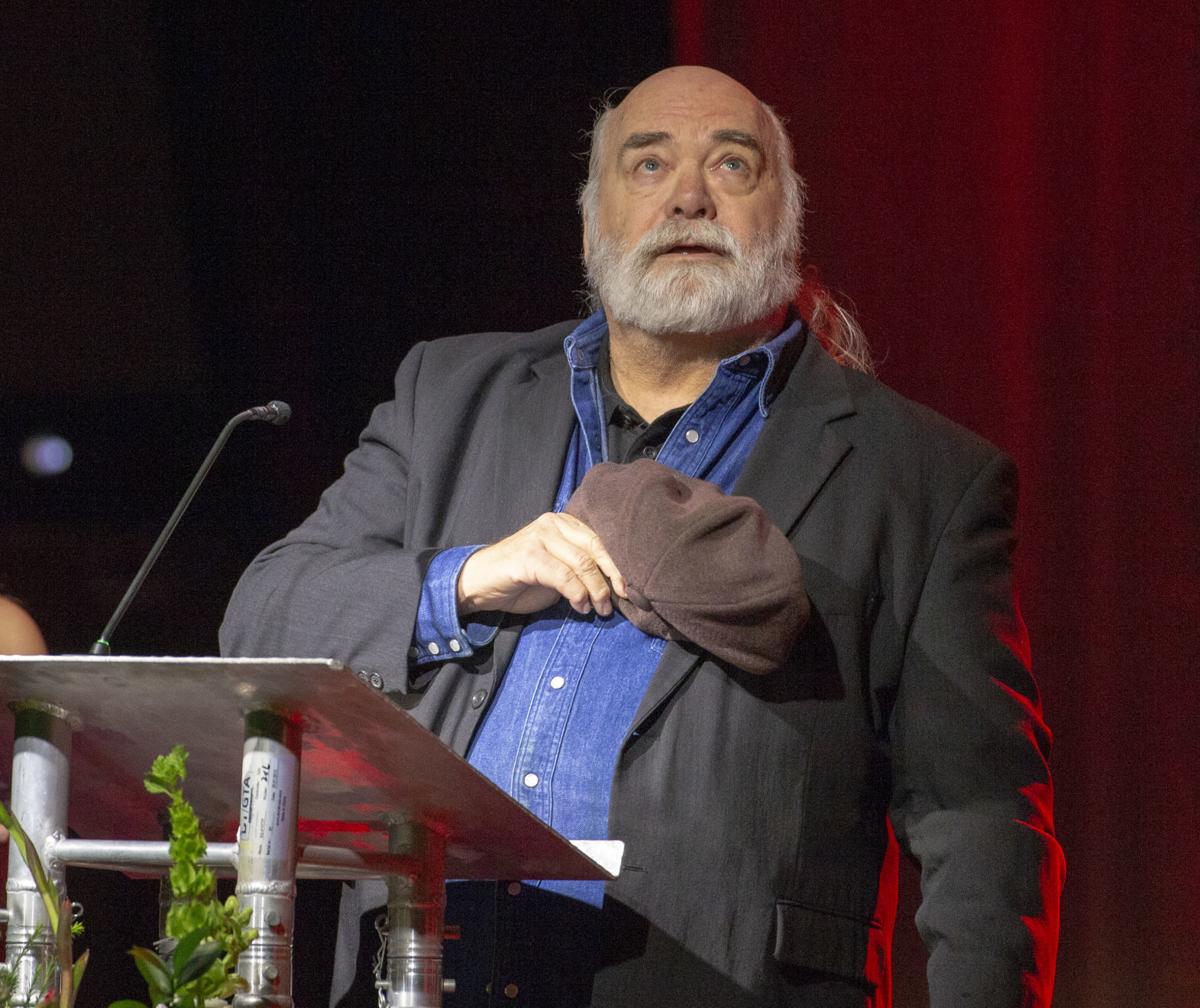 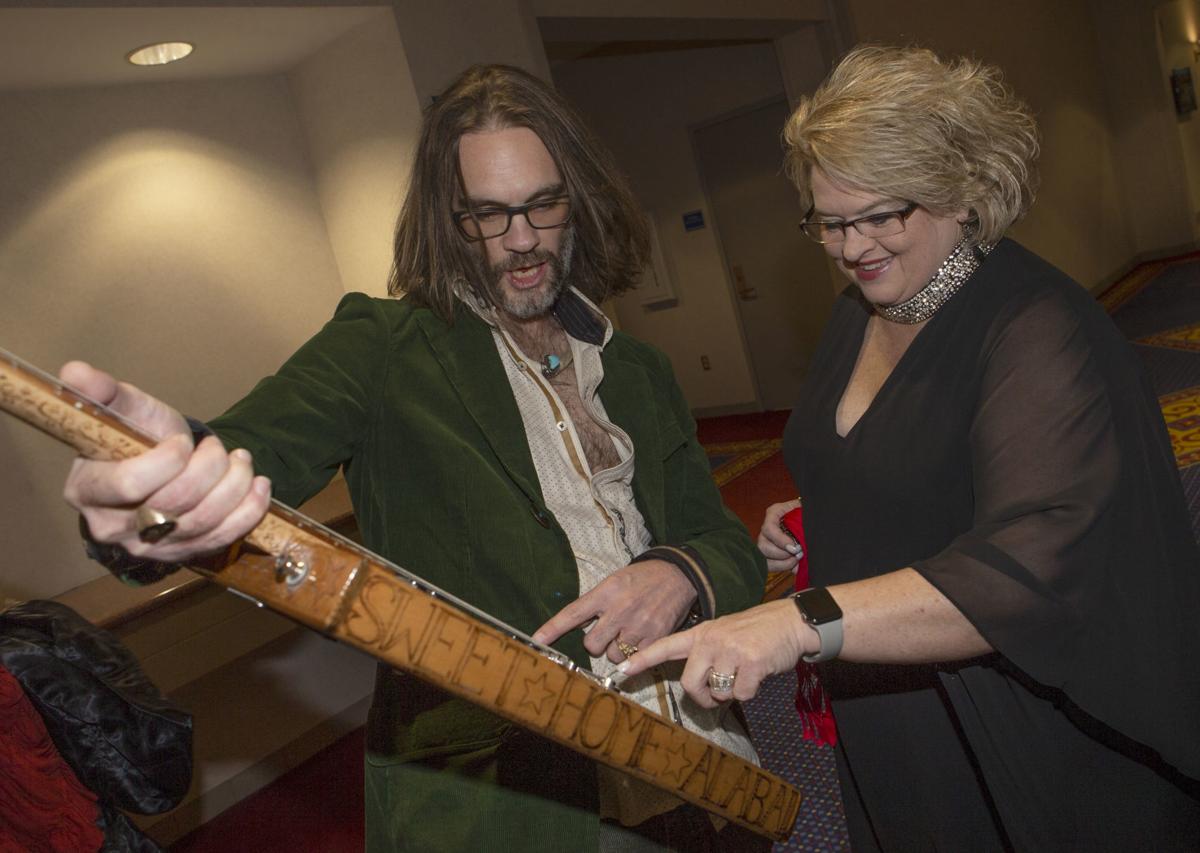 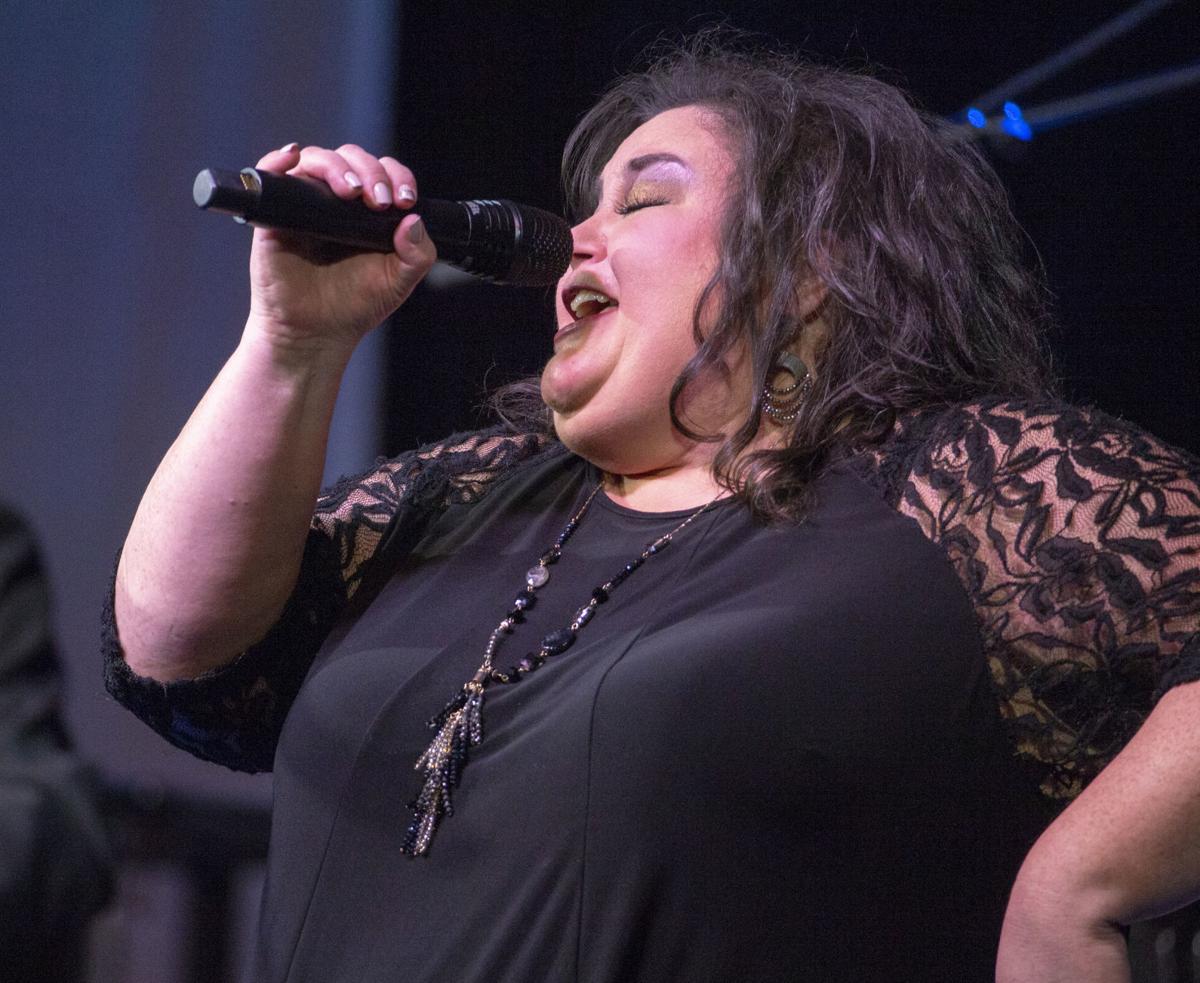 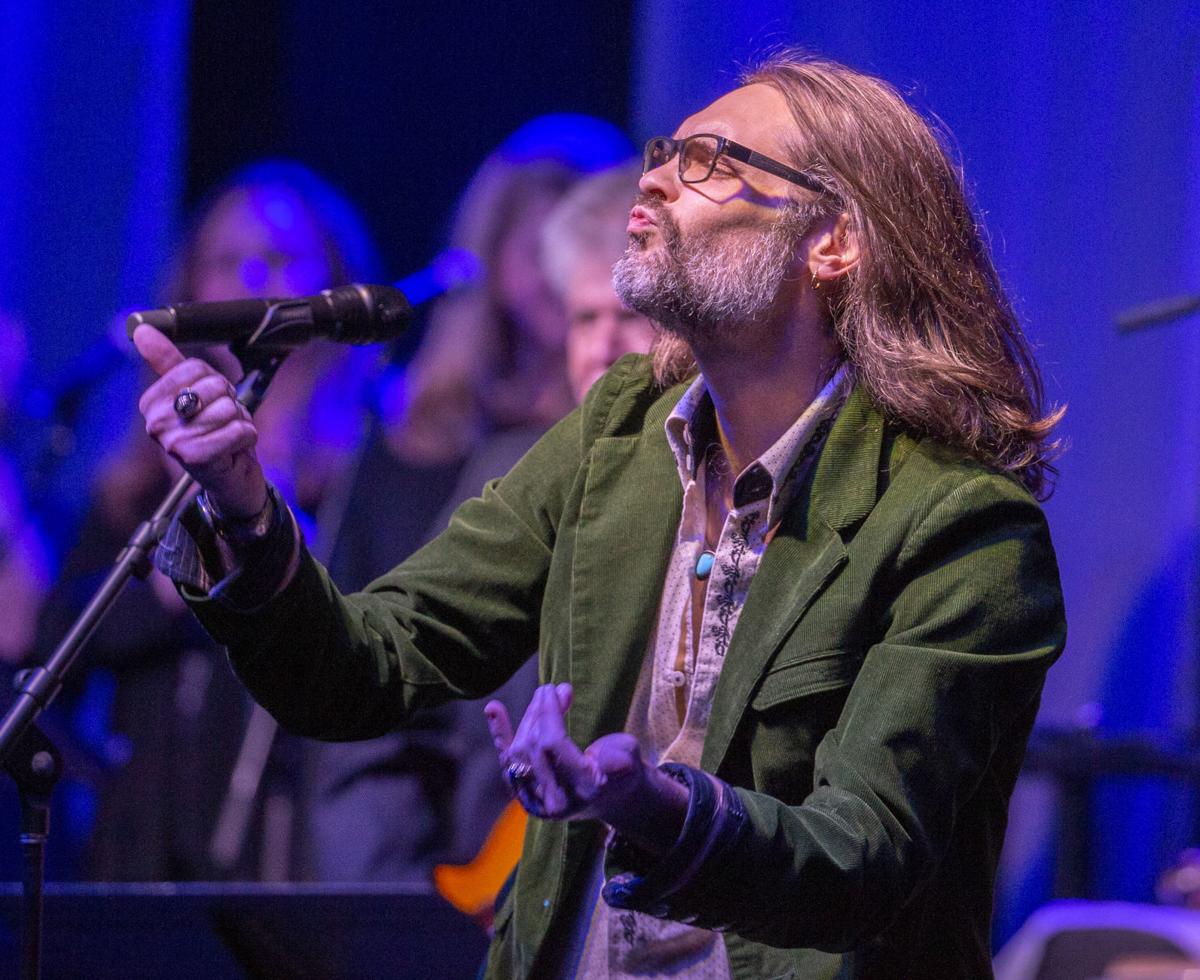 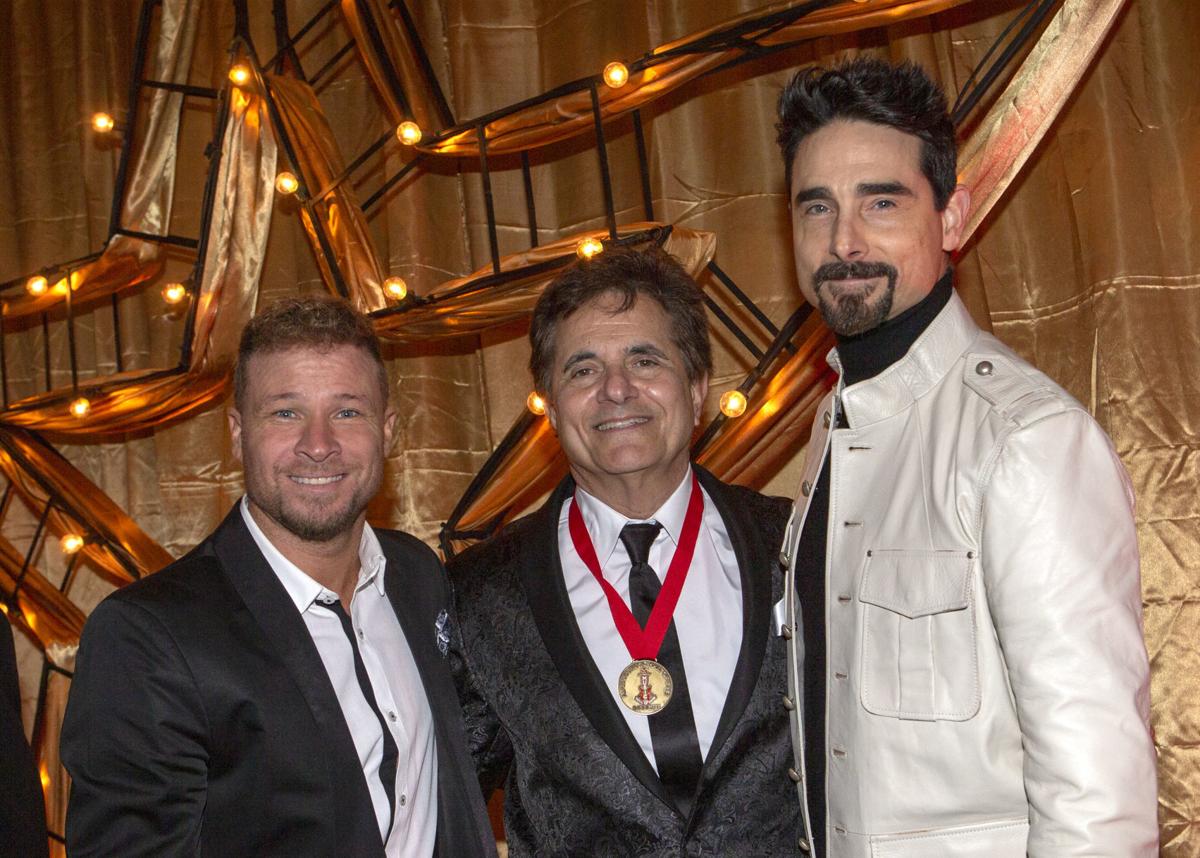 Inductee Gary Baker receives his award from Kevin Richardson and Brian Littrell of the Backstreet Boys at the Alabama Music Hall of Fame 2020 Induction Banquet at the Shoals Marriott Conference Center. [MATT MCKEAN/TIMESDAILY]

Scenes from the Alabama Music Hall of Fame 2020 Induction Banquet at the Marriott of the Shoals Conference Center.[CAROLINE OGLESBY/ TIMESDAILY]

Taylor Hicks plays a harmonica as he comes to the podium at the Alabama Music Hall of Fame 2020 Induction Banquet at the Shoals Marriott Conference Center. [MATT MCKEAN/TIMESDAILY]

FLORENCE — Gary Baker's smile beamed across the Marriott Shoals Conference Center's banquet hall Saturday as he was handed the crystal award signifying his induction into the Alabama Music Hall of Fame.

The award was presented to the Grammy-winning Sheffield bassist/songwriter/producer by two of his best friends, Backstreet Boys members Brian Littrell and Kevin Richardson.

“All I wanted to do was be one of y'all,” he said, referring to the Shoals musicians he spent years watching and learning from.

Baker was one of four Alabama music achievers to be inducted into the repository of the state's deep, varied musical history during the sold out biennial honors and awards banquet.

The fourth inductee was Huntsville native Mervyn Warren, a multi-faceted entertainment industry professional who is a performer, songwriter, television and film score composer, and producer.

"American Idol" runner-up Bo Bice and the star-studded house band opened the show with The Rolling Stones' classic “Brown Sugar,” a track recorded only a few miles away at Muscle Shoals Sound Studio in December 1969.

Huntsville blues guitarist “Microwave” Dave Gallaher of the popular Microwave Dave and The Nukes took the stage not as a performer, but the evening's first presenter.

Gallaher said Thornton was the daughter of a Baptist preacher who ended up working in a local tavern. Her first hit, Lieber and Stoller's “Hound Dog,” was cut with a three-piece band.

Thornton's posthumous award was accepted by Jessi Olsen, a member of the board of directors of the Willie Mae Rock Camp for Girls in Flatbush, New York, and student Willow Bennison.

“She taught me to be powerful and true to myself,” Olsen said. "We're proud to accept this award.”

Stephens' grandson, Bart Stephens, accepted the posthumous award on behalf of his grandfather, who founded EBSCO Industries in Birmingham and grew it into one of the largest companies in the state.

“My grandfather would love to have seen what you have done here with the hall of fame,” he said.

Stephens said his grandfather was a persistent and demanding sales person, but one who believed from early in his life that it was important to give back to his community.

Stephens' induction is unique because he wasn't a musician. “There is not a tradition in our family of musicianship, but there is a deep tradition of the appreciation of music,” Stephens said.

Bryson Stephens said his grandfather and grandmother, Alys Stephens, both cared for the symphony and wanted to see it become financially stable.

“We're proud of him,” grandson Bryson Stephens said. “He certainly did a lot for the symphony.”

Littrell and Richardson thanked Baker for the impact they had on the career of the Backstreet Boys and how he accepted them as part of his family.

“What can you say about Gary Baker,” Littrell said. “Small town guy with big dreams.”

He said Baker gave him the courage and strength to believe in himself.

Richardson said his first trip to the Shoals was in 1998, and he hopes the Backstreet Boys can claim to be part of the rich legacy of Muscle Shoals music.

He said the group jumped at the chance to work with Baker on their sophomore album.

Richardson became emotional when as he talked about how Baker and his family welcomed him into their home and treated him as one of the family.

“He was a collaborating mentor and friend, and a part of our family to the end,” Richardson said.

Baker thanked the previous inductees and his family for living through the hard times.

“You made all the good times sweeter and the bad times meaningless,” Baker said, “I am southern by choice, y'all. I'll close by saying, rock on.”

Baker and the house band played “I Swear,” the track that won he and co-writer Frank Myers Grammys, and “I'm Already There,” a Baker penned track recorded by the country band Lonestar.

Country Artist Jamey Johnson, of Enterprise, and the house band performed Keith Whitley's “Would These Arms Be In Your Way” and “Stars in Alabama,” a track he co-wrote with Teddy Gentry, singer and bassist for the Grammy-winning country group Alabama.

Mark Kibble, a member of the acapella gospel sextet Take 6, which helped launch Warren's career, said he met Warren at 12 and began playing music with him at 13 years old.

He said both of them had a connection to harmony. He said artists want to work with Warren because he's a genius and perfectionist.

Warren accepted his award and held it over his head before thanking the hall of fame and his family, many of whom were in attendance.

“I am honored to be a part of this lovely evening,” he said. “Thank you from the bottom of my heart. There's no place like home.”

To close the show, Shoals hit songwriter Mark Narmore and the house band performed a moving version of the Donnie Fritts classic “We Had It All” as images of Shoals artists who died in 2019 flashed upon a screen. Singer/songwriter Fritts and Swampers guitarist Jimmy Johnson were among those artists the Shoals bid farewell to last year.

Bice and Hicks returned to the stage to perform the unofficial state song, Lynyrd Skynyrd's classic “Sweet Home Alabama,” with the house band.

The honors and awards banquet is the hall of fame's biggest fundraising event.

Was the use of tear gas to disperse peaceful protesters in Washington, D.C. excessive?