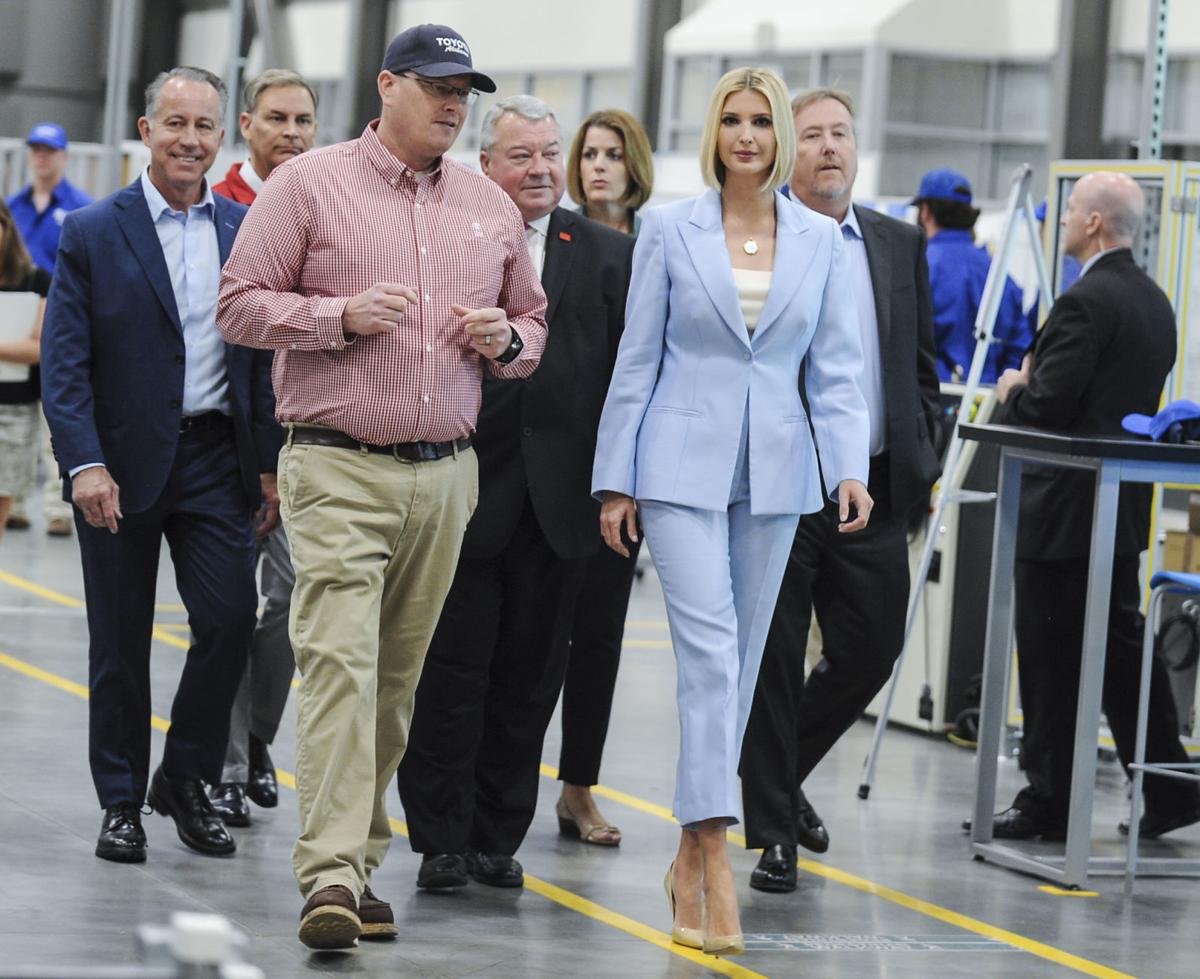 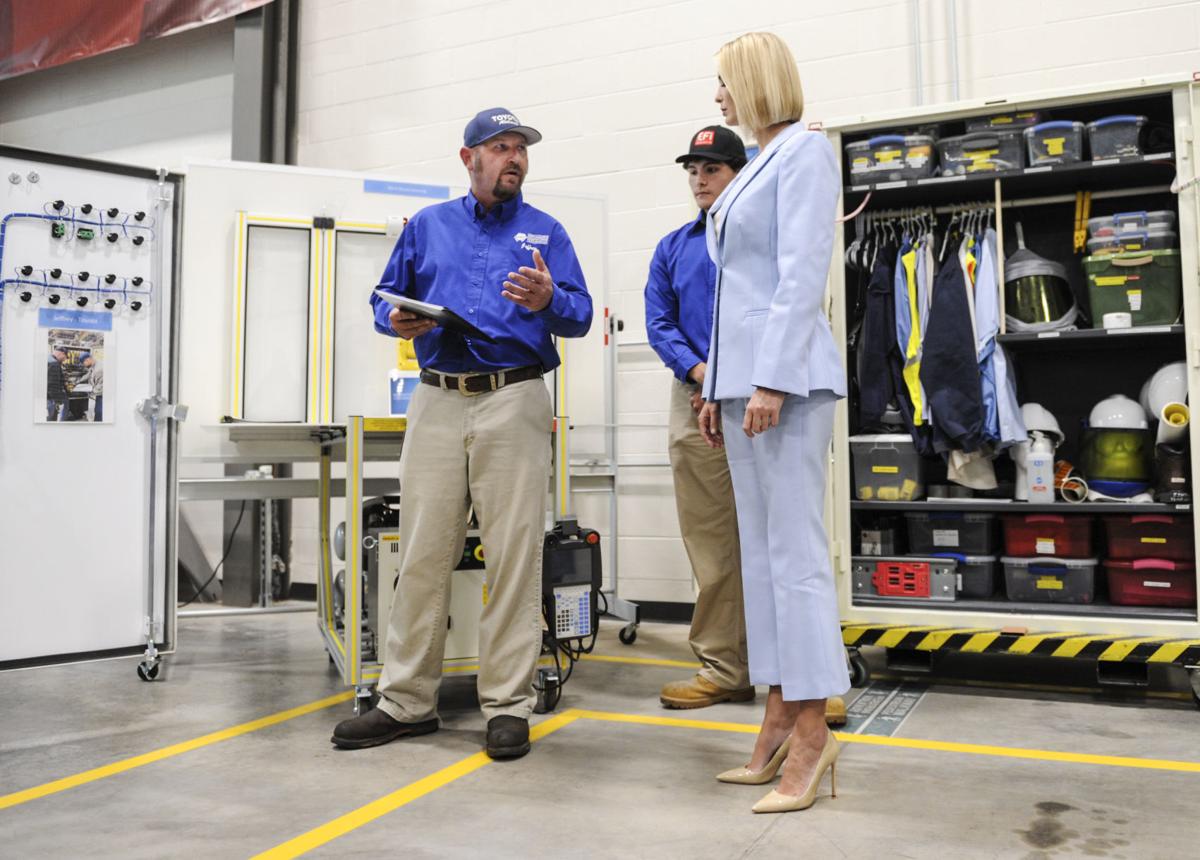 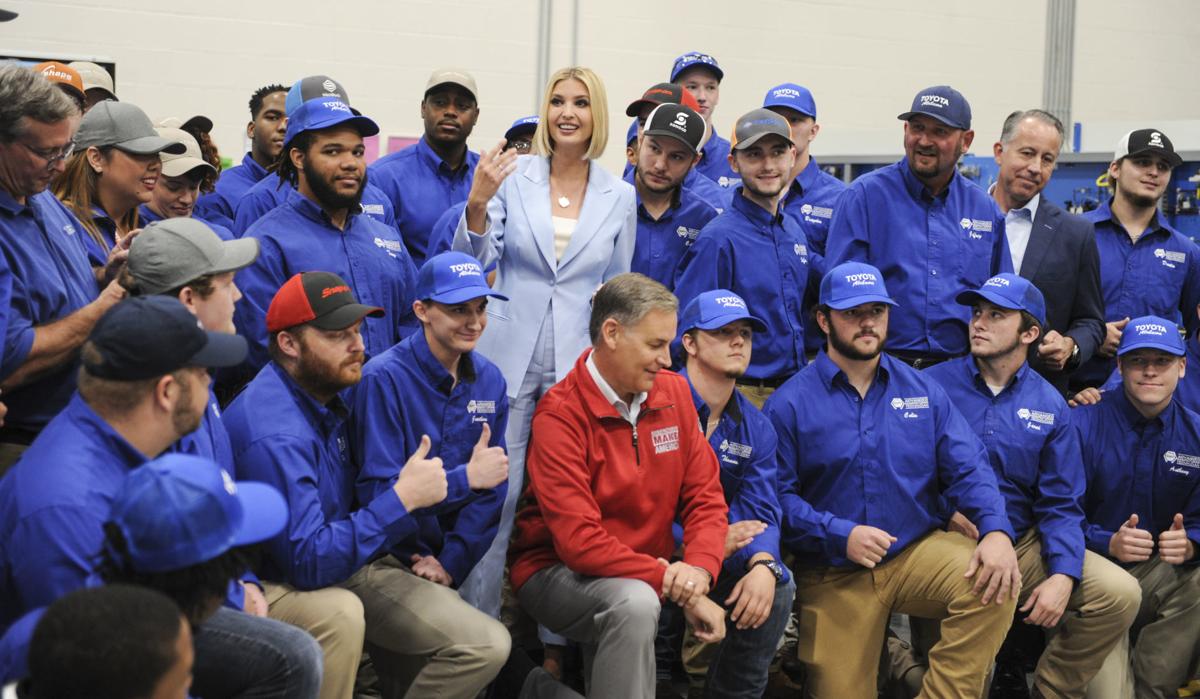 Ivanka Trump invites Advanced Manufacturing Technician program students to join her for a group photo after she toured the facility at the Alabama Robotics Technology Park on Tuesday. [JERONIMO NISA/DECATUR DAILY]

Ivanka Trump invites Advanced Manufacturing Technician program students to join her for a group photo after she toured the facility at the Alabama Robotics Technology Park on Tuesday. [JERONIMO NISA/DECATUR DAILY]

A program that spread to Calhoun Community College 10 years ago and lets students work while they train received an endorsement Tuesday in Decatur from Ivanka Trump, who discussed the need for its expansion nationally.

President Donald Trump’s eldest daughter and senior adviser announced at the Alabama Robotics Technology Park that the Federation for Advanced Manufacturing Education, also known as FAME, program will now be managed by the Manufacturing Institute.

The institute is a workforce and education partner of the National Association of Manufacturers.

In the program, students earn a two-year advanced manufacturing technician degree while working part time. The Calhoun students attend class three days a week at the Robotics Park and work in maintenance in a plant two days a week.

The program began as a Toyota Motor North America innovation to fill its labor needs. Other companies are now getting involved as Toyota passes management of FAME to the institute.

Ivanka Trump said the Trump administration wants to provide the same opportunities in other states as students like Paul Logston of Moulton have at Calhoun. She said the program is especially needed with unemployment rates low.

She said supporting high-tech education is among administration policies aimed at supporting industries.

Logston was one of the lucky participants who got to talk with Ivanka Trump. The Calhoun student, who was admittedly nervous during their short chat, told her his story about how he gave up possible football scholarships for the FAME program.

Logston said, “The school counselor changed my career path,” when she told him about FAME. He is on schedule to graduate in May. He is waiting to see if he gets a job offer from Toyota and, if he does, he plans to work while earning an engineering degree at a university.

Angie McCue, of Toyota, said 100% of Calhoun students who graduate FAME have been hired. The difficult part is completing the program because its requirements are strict, she said.

The program also helps already-employed workers with the education that allows them to move up in the company.

Dennis Parker, of Toyota, began the program in the early 2000s in Kentucky, but it didn’t really take off until after the 2008 recession.

Calhoun started FAME in 2009-10 with 13 students. It added 15 more the next year and it’s up to 66 now. A big surge of 50 freshmen joined this year because of the new Mazda Toyota Manufacturing USA plant that’s under construction in the Greenbrier area of Limestone County. Toyota already has an engine building plant in Huntsville.

FAME also continues to grow overall, and is up to 34 industrial partners in eight states. There are four classes right now in Alabama with three more scheduled to be added in the summer. The state plans to add 15 more in the future.

The program has grown so fast that “FAME developed a life of its own,” Ivanka Trump said. She said the program is needed in the rest of the country to fill the 500,000 vacancies in manufacturing.

Parker said the program's growth forced Toyota to find someone else to run it. The management change is all about continuing the expansion.

Parker said Ivanka Trump’s announcement does not come with any financial support from the federal government.

“The program is designed to be self-supporting so it doesn’t need federal funding for its operations,” Parker said. “We will accept grants, but those are used to get programs started.”

For example, Parker said Alabama recently got a $12 million federal grant that will go toward the goal of growing to 15 programs.

: How long do you collect your loose change before spending it or banking it?