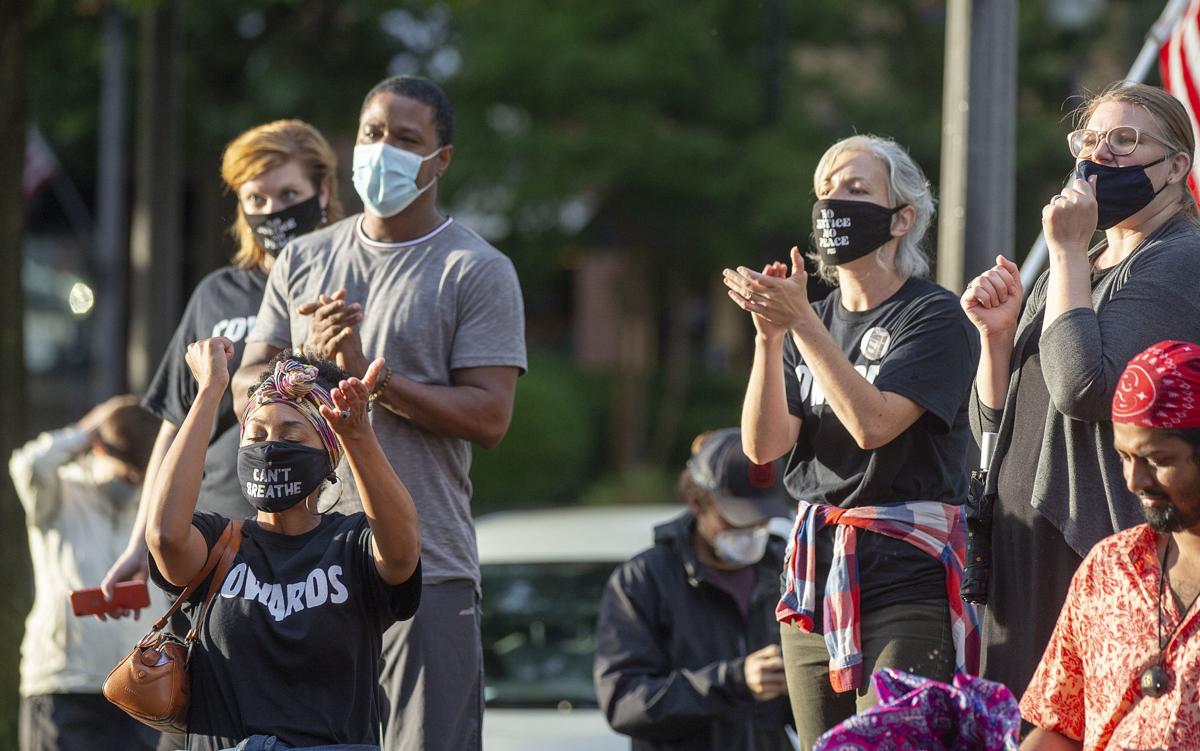 Camille Bennett leads the crowd in "take it down" after Mayor Steve Holt said he was in favor of removal of the confederate statue that stands outside the Lauderdale County Courthouse. [MATT MCKEAN/TIMESDAILY] 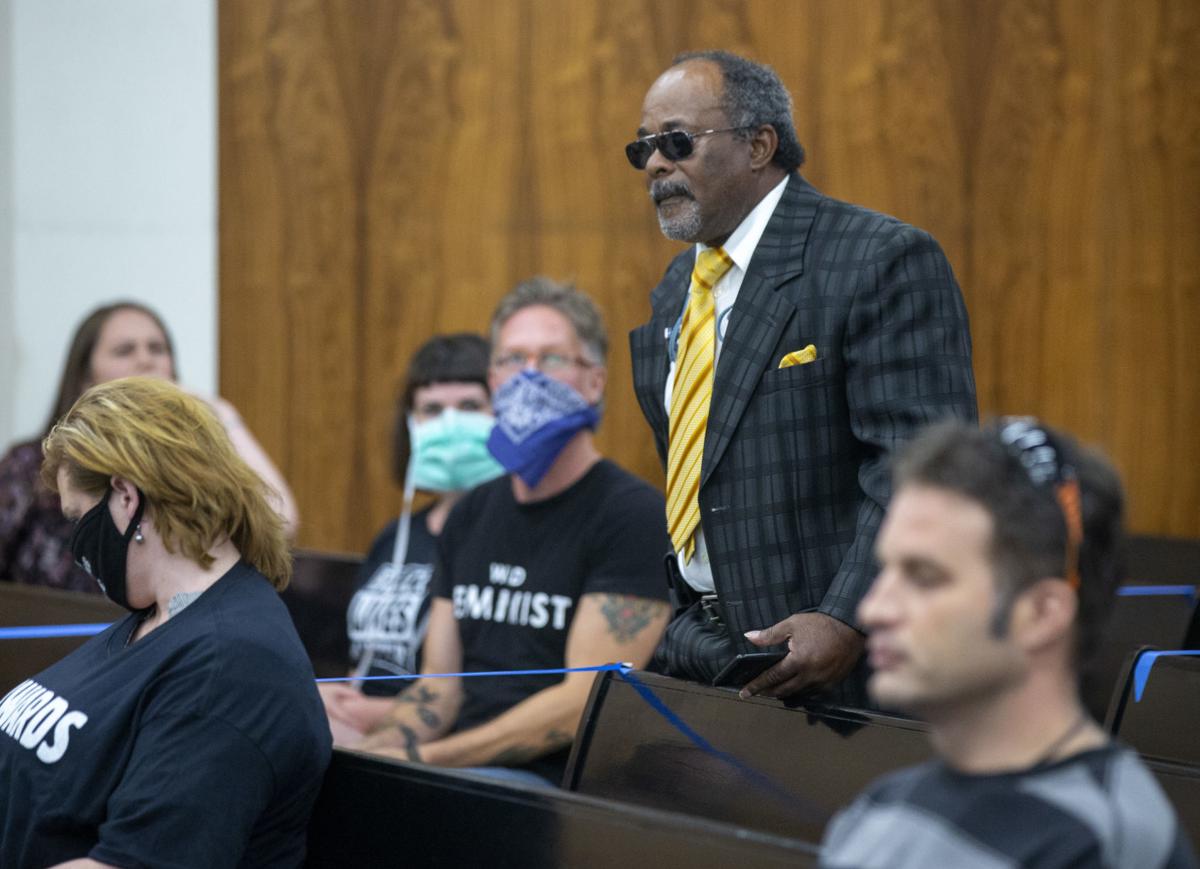 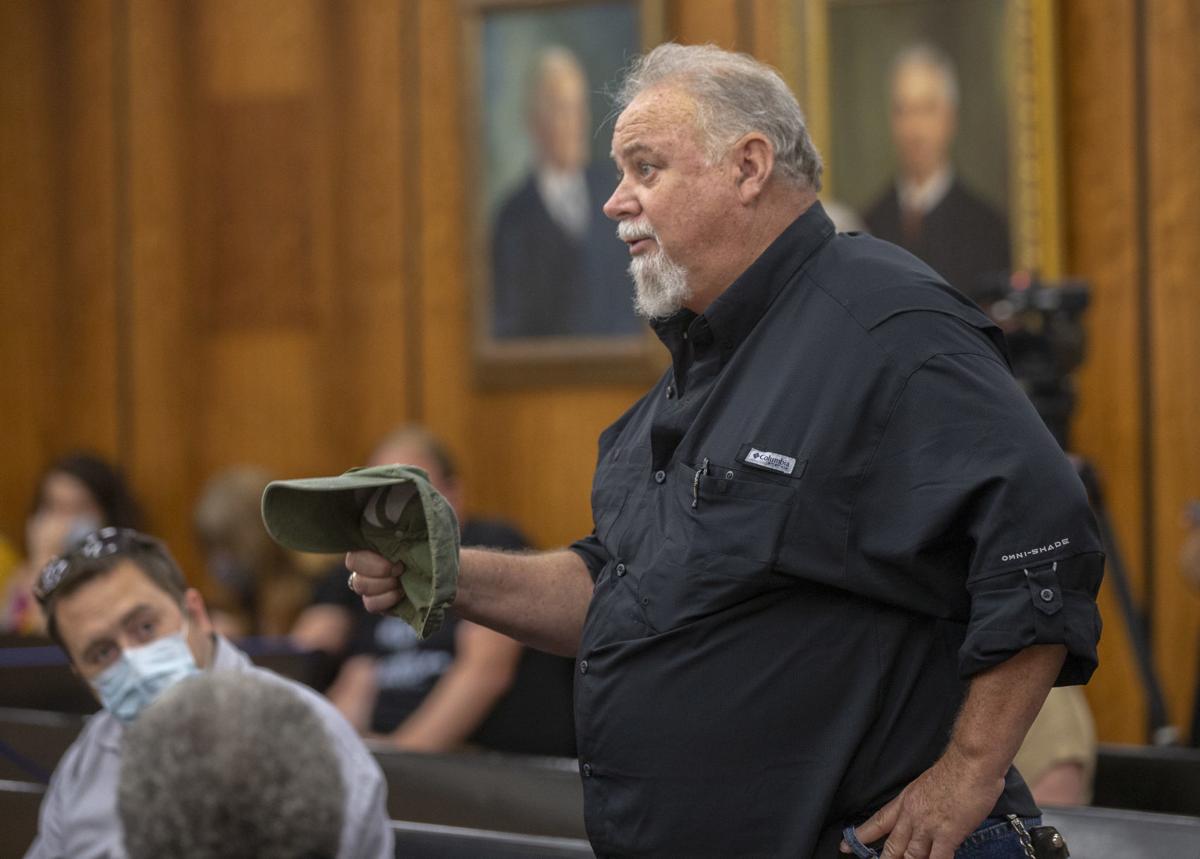 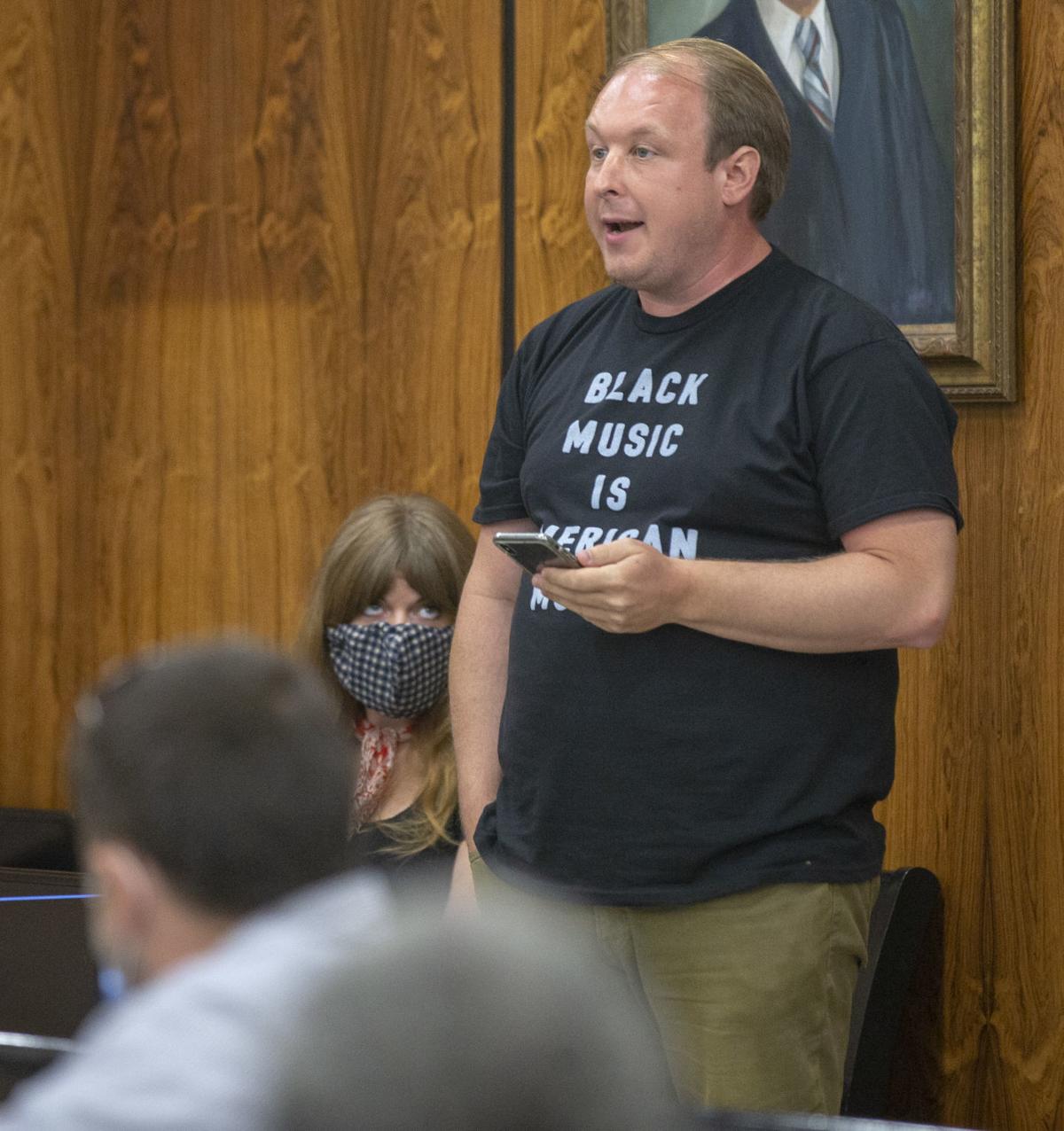 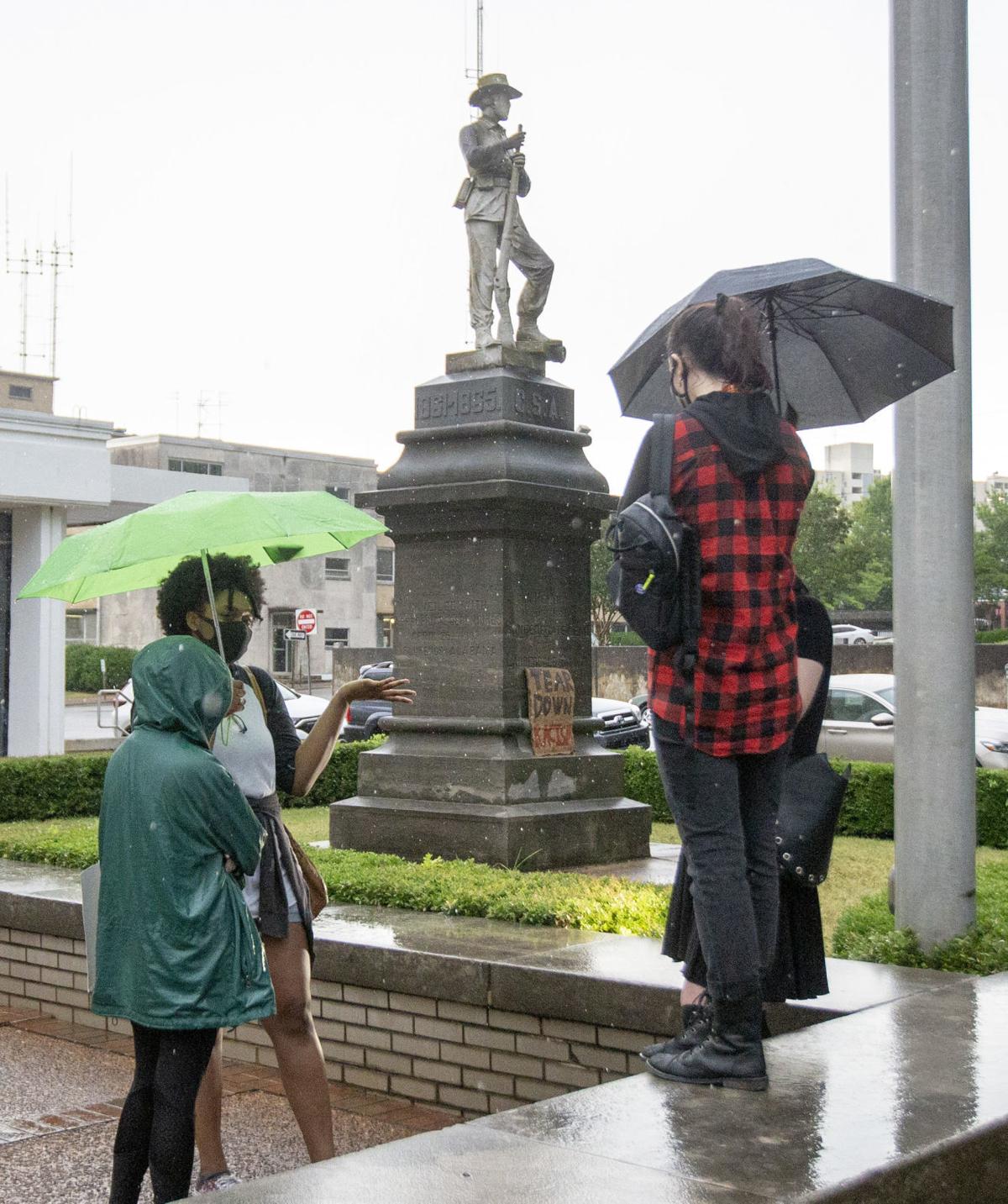 Camille Bennett leads the crowd in "take it down" after Mayor Steve Holt said he was in favor of removal of the confederate statue that stands outside the Lauderdale County Courthouse. [MATT MCKEAN/TIMESDAILY]

The mayor made the comments after a lengthy commission meeting, during which people spoke on both sides of the issue regarding moving the monument with the majority favoring its move to Soldier's Rest.

"I'm happy to recommend that to the council," Holt said following the meeting.

He said the next council meeting is July 7 and he believes the council would vote in favor of the move at that meeting.

"I would think that we would not delay it, and act on it accordingly to relocate the statue," Holt said.

He said there are logistics to deal with as part of the process.

"I'm told it weighs 17 tons," Holt said. "Soldier's Rest is a beautiful area and well maintained and there's a place for it, but we'll have to pour a pretty significant concrete pad for it and that's going to take a few days just for that. We also need to talk to some people about how to move it."

City leaders also are looking into whether there is a need for official county authorization for the city to get on the property for the work involved in removing it from the courthouse, so the county would not be held liable if any accident occurs during the process.

Monday's meeting was held in the fifth-floor courtroom of the courthouse to allow more members of the public to attend. Due to social distancing regulations, only about 40 or so were in the courtroom at once, but many residents left after making comments to allow others to come in and comment.

Officials estimated 70 to 75 people attended at one point or another in the meeting.

Two weeks ago, Commissioner Brad Holmes moved to add an agenda item at that meeting to move the monument to the Soldier's Rest, but the motion failed because it did not receive unanimous consent.

Lauderdale County Commission Chairman Danny Pettus said Monday he had a letter from Suzanna E. Rawlins, Alabama Division president of the United Daughters of the Confederacy, that stated the organization gave the statue to the city in the early 1900s and therefore the organization has no claim on it.

The letter also states the Daughters of the Confederacy agrees that a "dignified memorial may be held when the statue is moved in order that the statue is treated with the reverence and respect it is due."

It also acknowledges that a benefactor has agreed to fund the moving and placing of the statue.

A crowd outside the courthouse cheered Holt's statement following the meeting. Camille Bennett, founder and executive director of Project Say Something, which first recommended moving the statue to the Soldier's Rest, said she is pleased by the progress.

"I'm just feeling somewhat hopeful that the process will speed up to get it down," Bennett said.

People spoke for some 90 minutes during the commission meeting.

"The Confederate states were defeated as treasonous," the Rev. Billy Ray Simpson said. "Everything dead needs to be buried in the cemetery."

However, Clint Freeman said the statue has special meaning to many residents.

He also pointed out a 2017 state law makes it illegal to move the statue and other monuments that have been at a location for more than 40 years. The law comes with a $25,000 fine, which city officials said private donors have committed to pay.

Freeman said he worries about possible next steps. "They're going to start wanting the Alabama flag taken down next," he said.

Eartis Bridges pointed out the commission meeting started with everyone reciting “The Pledge of Allegiance.”

Bridges, who is black, zeroed in on the word "indivisible" in the pledge.

"It means not to be divided or separated," he said. "So, unless you consider me not a man, then you can't be separated from me and the pains that I feel and the disgust that I see."

Reed Watson, who co-owns Single Lock Records, spoke of the history of racial harmony in what has become a famous local music industry. He said Sound Diplomacy did a study that showed the local economic impact of the music industry is $49 million.

Watson said people from around the world come to the Shoals because of that.

"Have you seen a lot of Confederate monument tourism here lately?" he asked, adding that monuments such as the one at the courthouse could be having a negative impact on the community.

Bennett pointed out the speech that was made during the monument's dedication declared whites are above blacks and referred to blacks as "mongrels."

Ricky Johnson said the monument represents those who died in the Civil War and the loved ones they left behind.

"The statue honors them, the children who never saw their daddy," Johnson said. "The statue has nothing to say. It just stands for the dead."

Wesley Thompson said he has children ages 3 and 4 and they are inquisitive. He wonders what he will say when they ask him what the statue is about.

"How do I respond?" Thompson asked. "I just want you to put yourself in my shoes."

Read the The book of Proverbs from that old book. Chapter 23 verse 10,11

Folks I can identify with the sentiments written in this Viewers Opinion. This is 2020, the monument is to an entity that we today would term "terrorist" and the current president would identify as "traitors". I'm a big USACW nut, it's was a very poignant time in this nation's lineage. It speaks to many changes and improvements that make America what it is even today. It is the sole ending of the institution of Slavery.

"Say Something" did not want to see a Calvary Officer of The Confederate States of America in downtown Florence on public property any longer. And that is a very good point. For my part, I thought the fastest, cheapest and most significantly appreciable way to handle this particular matter would have been to leave the Calvary Officer in place, remove the acronym "CSA" and replace it with "USA" and then add a caption that exemplified the fact that the sin of Slavery had forever been ended by the Union Victory in The American Civil War. I sent that suggestion to a county office but who knows what may have happened to that piece of mail. Regardless the deal is done and the resulting change looks like a reasonable sort of conclusion. The folks desiring the statue's removal did so of their own time, own free will and their own effort. Was anyone there to oppose this request to remove the statue? Did anyone offer alternative suggestions? Did anyone suggest the formation of an advisory committee made up of persons from "Say Something" and the folks that wanted to save "The Horse"?

This is an emotional issue for certain members of our collective society, it's more than just "tearing down history". Politics is involved, social changes are involved ethics and morality most importantly the Word of Thy God. . All that plays a big role in the necessity of decision like this. The emotions of people once said to be "property" to other folks is hard for any good person to understand but to live with the knowledge of that fact must be pure misery. Would y'all be able to just shrug off the fact that previous generations of your own blood were used and abused to no end? Best to All, Walter A. Bradford

These, and all other destroyers/eradicators of history, Southern heritage or otherwise, are the American Taliban. If you're going to deface or destroy history of the past, don't be selective. Erase ALL of it: Lincoln, MLK, Kennedy, etc. Fools and useful idiots at work, each and all.

Give into one and more will be expected. Just as what JUST started at UNA. What you want is never enough.