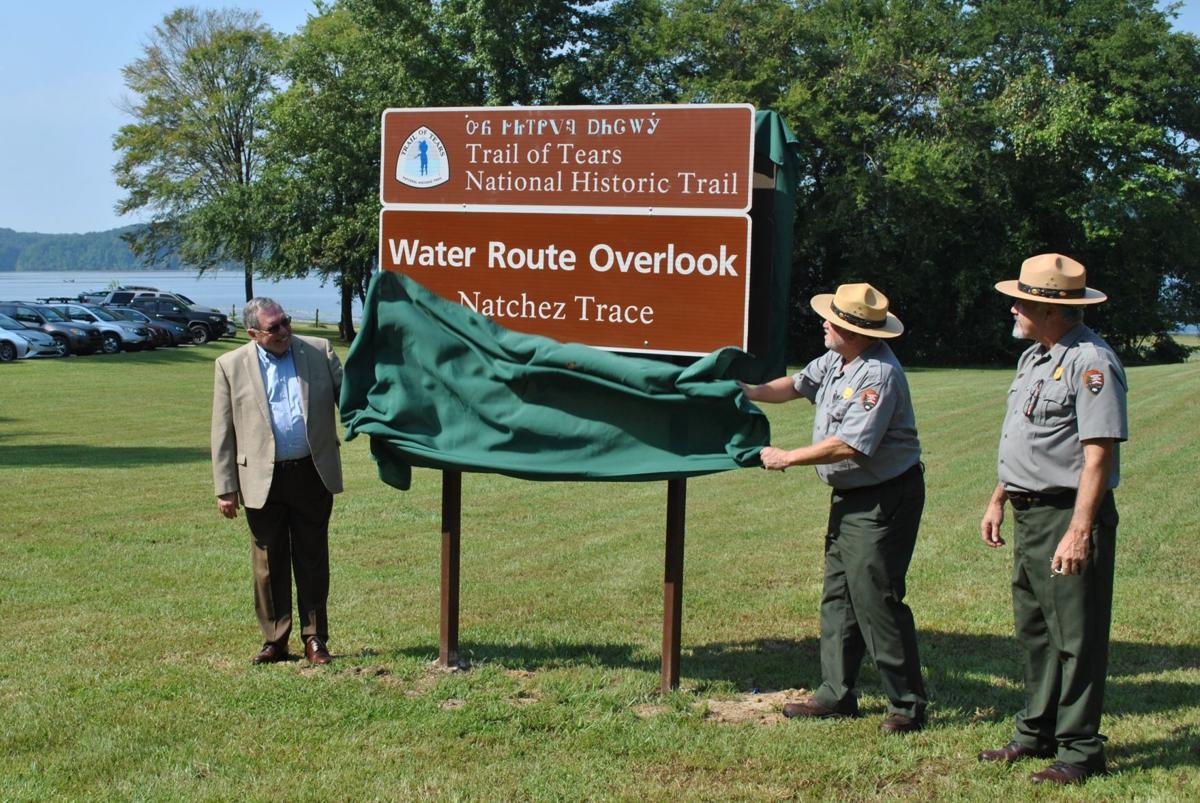 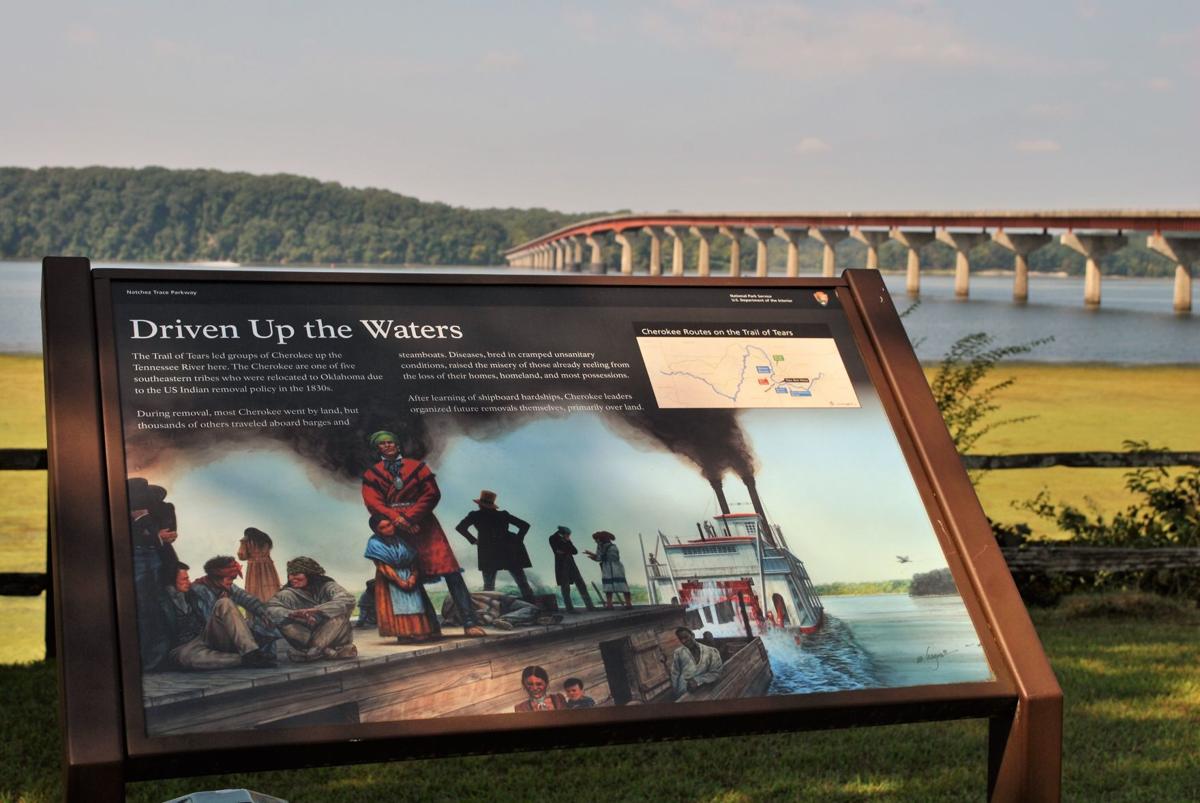 The story of the Trail of Tears and its connection to the Natchez Trace Parkway can be heard through this exhibit at the trace's Water Route Overlook. [BERNIE DELINSKI/TIMESDAILY] 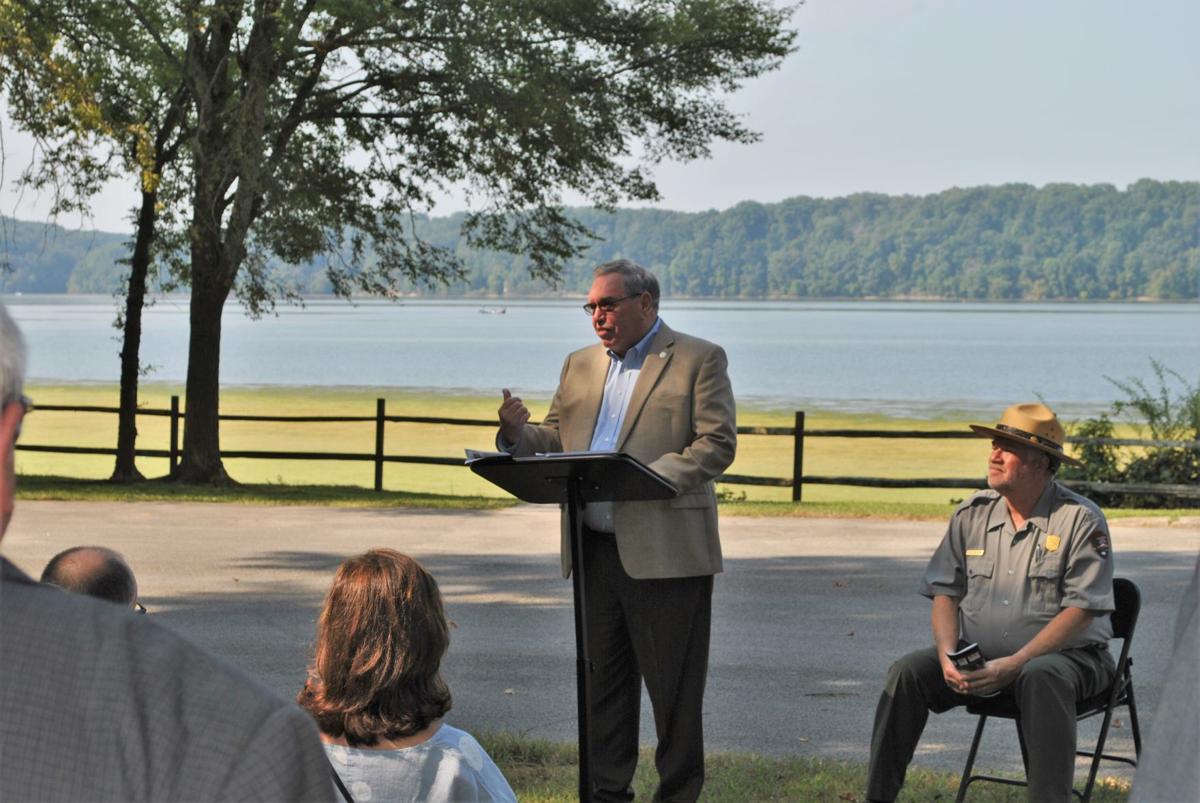 The story of the Trail of Tears and its connection to the Natchez Trace Parkway can be heard through this exhibit at the trace's Water Route Overlook. [BERNIE DELINSKI/TIMESDAILY]

Standing near a bank of the Tennessee River at the Natchez Trace Parkway in Lauderdale County, Jack D. Baker shared a story Saturday that served an example of the tragic lives Native Americans endured during the Trail of Tears.

"My fifth great-grandmother and her father were in this group," Baker, president of the Trail of Tears Association, said during the ceremonial unveiling of a marker commemorating the trail.

His ancestors were among Cherokee Indians who were part of the forced removal of the 1830s. Baker said the father he mentioned during his talk was more than 100 years old and blind at the time, but his spirit could not be broken.

"He was so disruptive that the soldiers threw him in the river and drowned him," he said.

Baker added that the great-grandmother already was separated from the rest of her family as part of the physically and emotionally grueling trail.

"I always wonder what she would have thought, that a descendant of hers is here 181 years later, talking about her," he said. "It would be surprising to her that she would be remembered."

Baker and National Park Service rangers unveiled the monument, which includes English writing as well as a short sentence in Native American script.

Loosely interpreted, that sentence reads, "The trail where they cried," Baker said.

The marker is at the Water Route Overlook, which is at the landing of the bridge crossing into Lauderdale County at the trace.

Mary Risser, superintendent of the Natchez Trace Parkway, said it was among four such markers unveiled Saturday at Trail of Tears locations along the trace.

"Three groups of Cherokees traveled this river," Risser said. "This was one of the important stops along the way. We are very proud and also humbled to present this memorial to the Cherokee people."

Mahr, who is superintendent of the National Trails Intermountain Region and Trail of Tears National Historical Trail, said it is important to remember the Trail of Tears tragedy.

"It's wonderful the way Americans are wanting to commemorate and wanting to understand what occurred along the trail," he said.