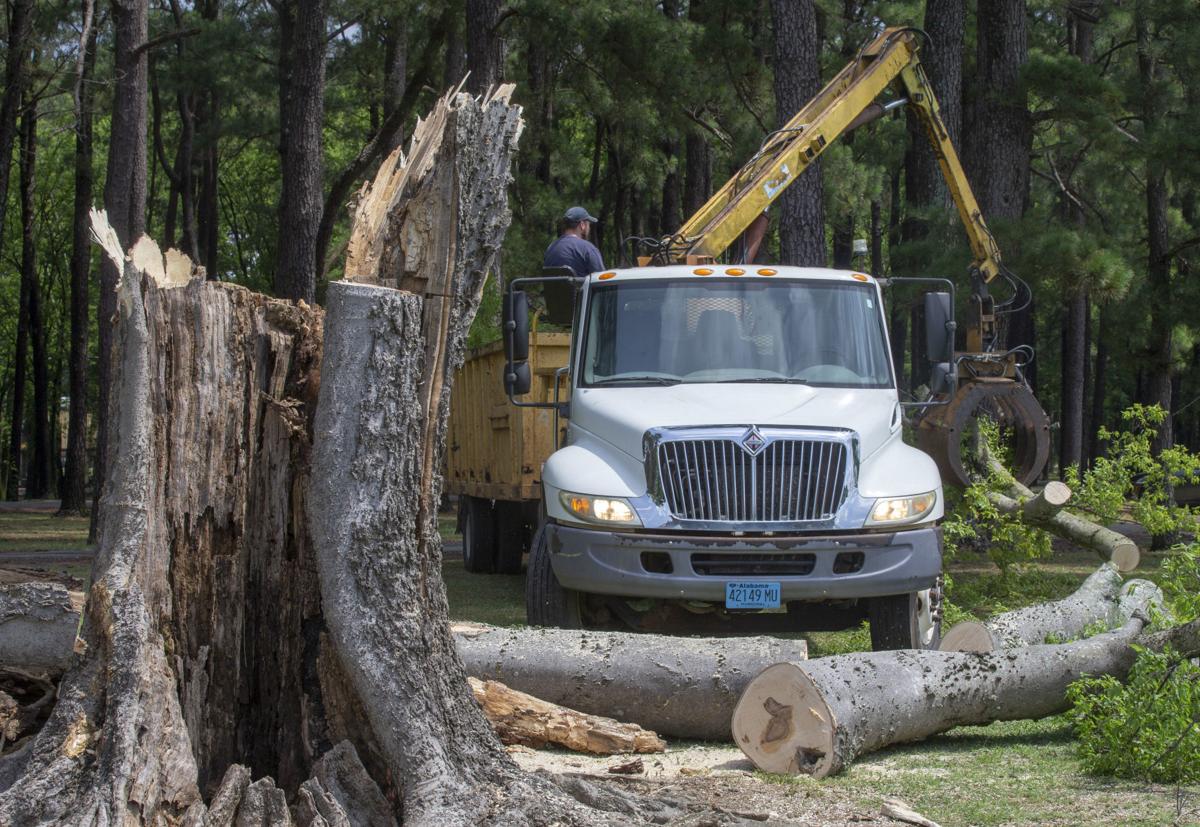 A large tree that was blown down Monday night at McFarland Park is cut up for removal. [MATT MCKEAN/TIMESDAILY] 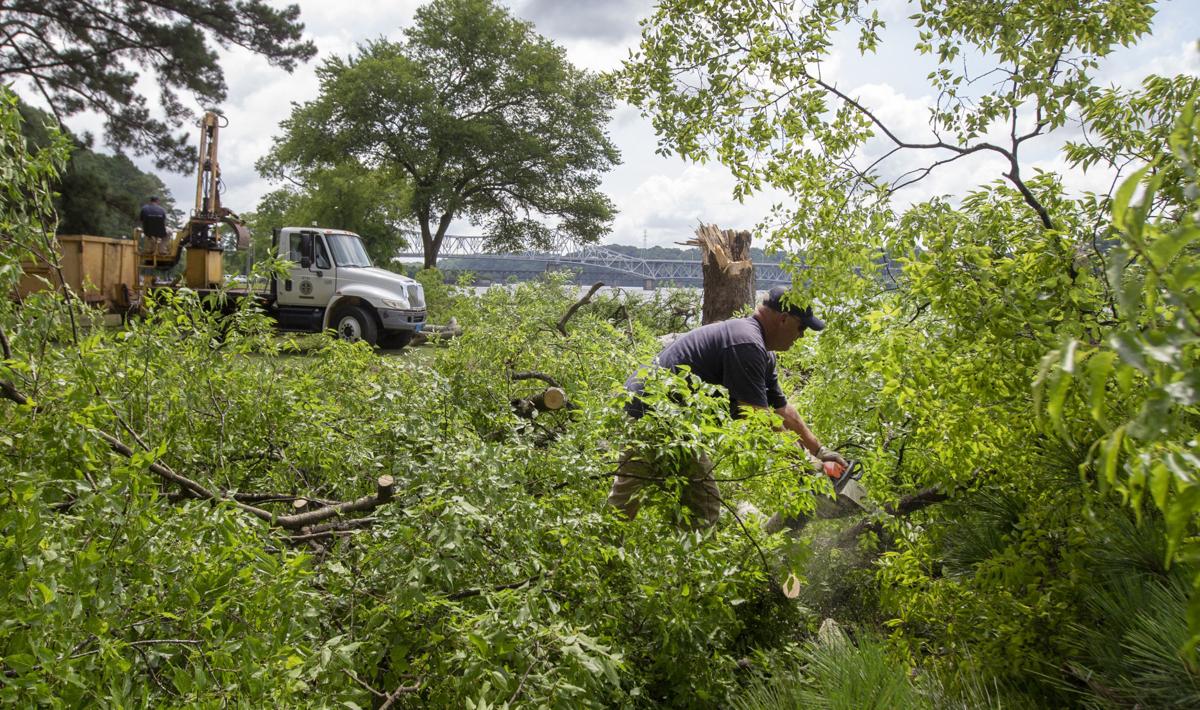 Workers remove limbs from a large tree that fell Monday night in McFarland Park during a thunderstorm. [MATT MCKEAN/TIMESDAILY] 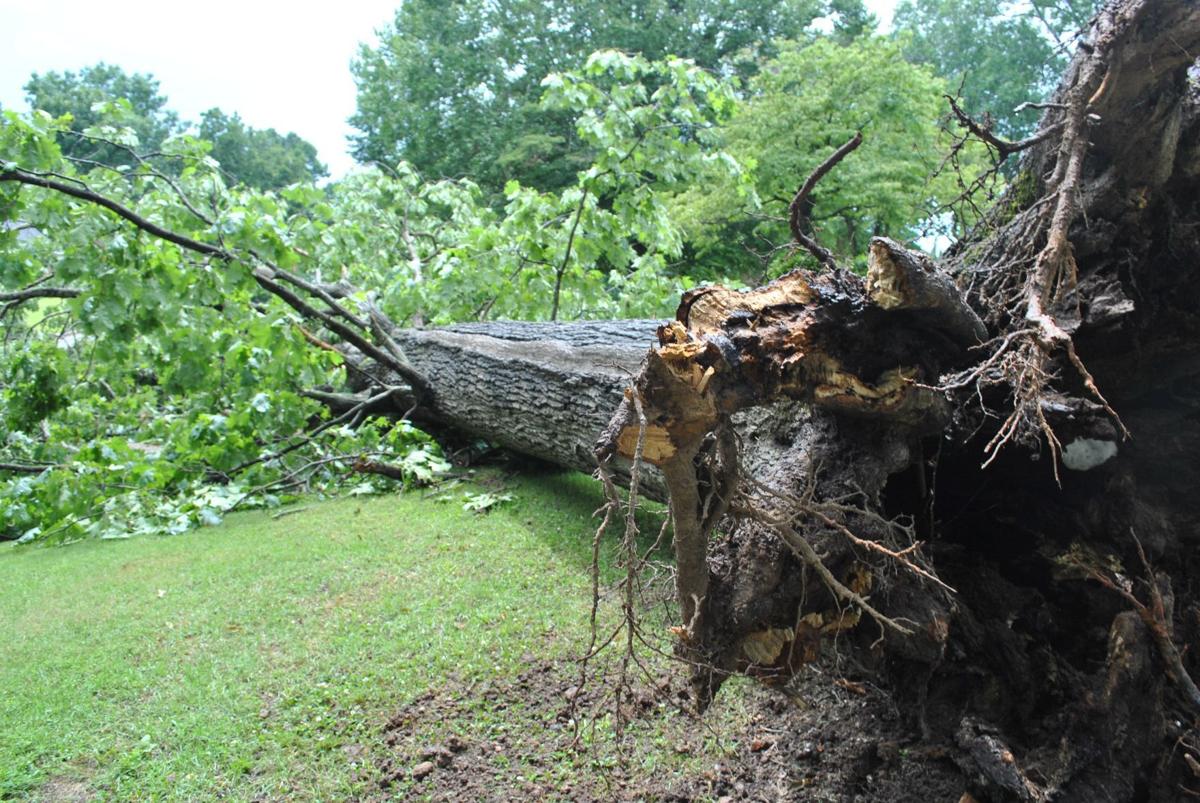 A large tree that was blown down Monday night at McFarland Park is cut up for removal. [MATT MCKEAN/TIMESDAILY]

Workers remove limbs from a large tree that fell Monday night in McFarland Park during a thunderstorm. [MATT MCKEAN/TIMESDAILY]

Jimmy Holland looked outside his home and saw the result of a string of stormy weather that started late Monday afternoon and continued off and on overnight.

Holland said the storm downed a large red oak at his home on Holland Drive in Sheffield.

"I just about cried," he said.

Holland calls it a Civil War tree because it had been struck at times during conflicts in the war.

"It's full of lead," Holland said.

He explained that Confederates used what today is the backyard of his house as a strategic point, and that sometimes caused conflicts. The location is on the Sheffield Bluff overlooking the Tennessee River.

"They had a Confederate gunning placement shooting at barges going to Shiloh," Holland said.

The damage was an unfortunate exception to an otherwise fairly damage-free storm report, although the storms were strong, authorities said.

"We had just a couple of trees down here and there across the county," Colbert County Emergency Management Agency Director Michael David Smith said.

"We, fortunately, did not have severe damage reports," Grabryan said. "We got some pretty good rain out of it though."

The tree that fell at McFarland Park was near the exit of a parking lot that overlooks the Tennessee River. City workers had removed it by the end of the day.

The Shoals, which has had a heavy amount of rainfall this year, suddenly had fallen dry for a spell with no measurable rainfall since June 10, according to data from the National Weather Service office in Huntsville.

That changed Monday when 1.43 inches of rain fell, according to the weather service. As of Tuesday afternoon, an additional .77 of an inch fell.

That has pushed total rainfall amounts to 44.17 inches, according to the weather service. That is well above normal for this time of year, with 27.19 inches being the normal amount for this date.

The annual total thus far this year is 83% of the normal total rainfall amount for the entire year of 53.2 inches, according to the data.