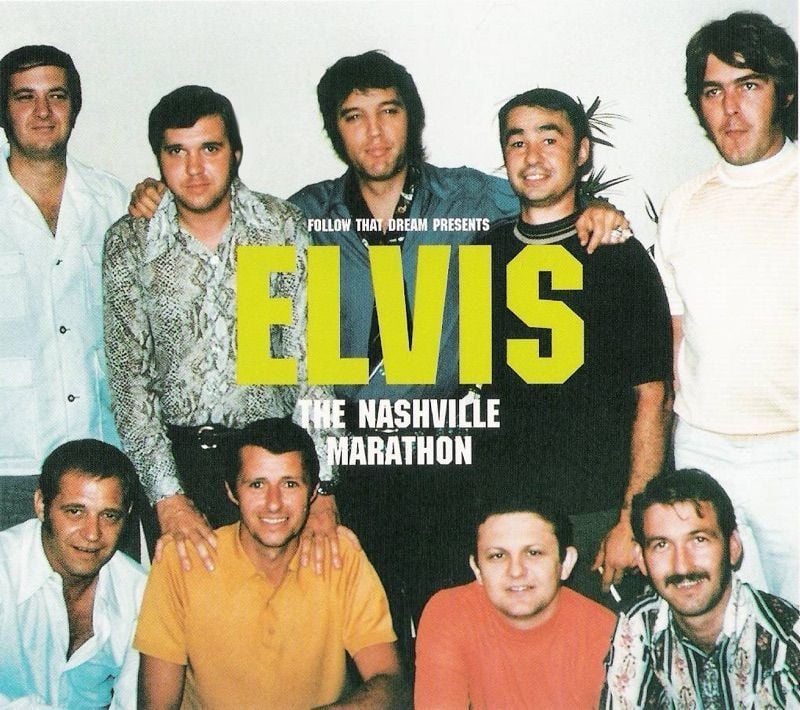 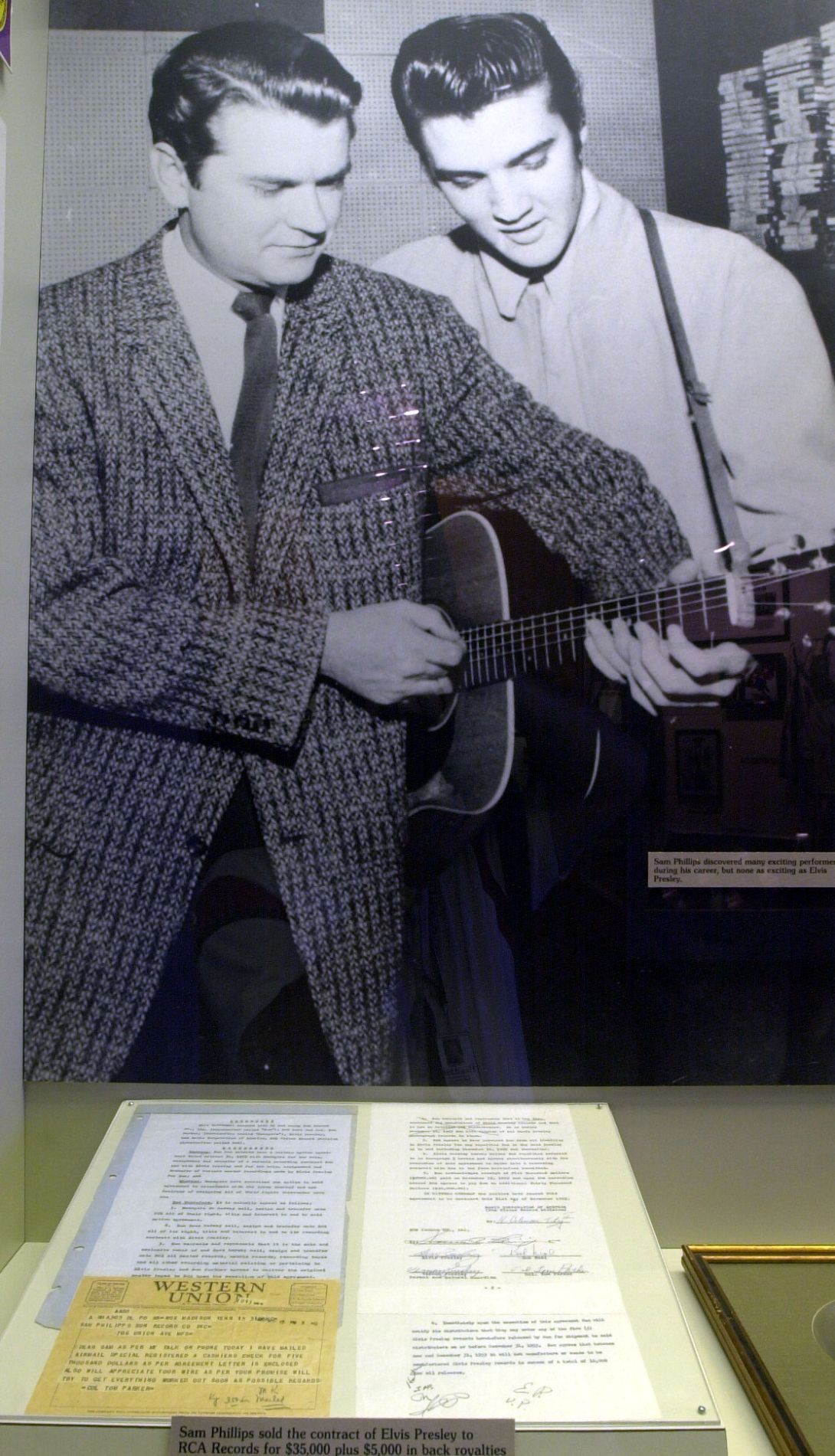 Elvis Presley works with Sam Phillips, of Sun Records, during a recording session. The photo and original contracts with Col. Tom Parker are on display at the Alabama Music Hall of Fame in Tuscumbia.

Elvis Presley works with Sam Phillips, of Sun Records, during a recording session. The photo and original contracts with Col. Tom Parker are on display at the Alabama Music Hall of Fame in Tuscumbia.

David Briggs said many people tried for years to explain how the legacy of Elvis Aaron Presley could continue for so many years and even grow stronger after his untimely death 38 years ago today.

Briggs, a Killen native, who was a member of the first FAME Recording Studios rhythm section, said it’s a question nobody has the answer to.

“He kind of blazed a trail and path so bright, nobody has ever been able to extinguish the flame,” Briggs said. “He was just one of a kind.”

Briggs and fellow rhythm section member Norbert Putnam had the privilege of recording with the King of Rock ‘N’ Roll in the late 1960s and up until his death Aug. 16, 1977.

Briggs began recording with Presley in 1966 when the legendary pianist Floyd Cramer was late to a recording session in Nashville. When Cramer arrived, Briggs got up from the piano, but was told to stay put, while Cramer played the organ.

Briggs said he was 23 years old and had been in Nashville about a year.

“I was nervous,” Briggs said during an interview from his Nashville studio. “He was the biggest star at the time. It was a little nerve wracking. “

He didn’t know Presley, but ended up getting to know him pretty fast.

“He was so generous with his praise,” Briggs said.

Briggs said he spent a week at Graceland, Presley’s home in Memphis in late 1976 with the intention of recording an album that would include Presley on vocals and himself on piano.

“We talked, watched TV and played games,” Briggs said. “I stayed a week and finally said I have to go back to Nashville.”

The album was never recorded.

Putnam and Briggs moved to Nashville at the same time, but Putnam didn’t start recording with Presley until 1970 during what became known as the Marathon Sessions at RCA Studio B. Briggs was present, as was Florence native and FAME rhythm section member Jerry Carrigan.

“The week of June the fourth through the eighth, five nights, was the first time Elvis Presley works with the old Muscle Shoals rhythm section,” Putnam said.

Produced by Felton Jarvis, the sessions produced 35 tracks that crossed genres of pop, country and gospel.

Putnam said evening recording sessions normally ran from 6 to 9 p.m. and 10 p.m. to 1 a.m., but with Presley, they began whenever he arrived.

“Elvis got up around five and had his breakfast, and would be at the studio promptly at 8 p.m., two hours late,” Putnam said.

Like Briggs, Putnam said Presley was a laid-back artist and easy to work for. He said Presley always would make a grand entrance.

“He always had a big smile on his face,” Putnam said. “He would come in and hold his arms up and say, ‘Hey gang, you guys ready to do it again?’ ”

Instead of getting right to work, Presley liked to tell the musicians stories.

“Later on, I’m looking back and I wondered why we didn’t go right to work,” Putnam said. “The first time he wanted to make sure we were totally relaxed. I don’t want to say he had an aura about him, but he almost had an aura about him. He was the most beautiful man I’d ever seen. His hair was perfectly jet black. I remember being a little disappointed he wasn’t eight feet tall.”

Putnam said Presley would sometimes speak of himself in the third person when telling them a story, which could be about a female fan scaling the walls of Graceland and trying to come in the back door.

“His voice was soft like mine was, like he didn’t want to interrupt anyone over in the corner,” Putnam said. “He’d have us rolling in the floor. He was so good at this.”

Jarvis, the producer, eventually would come out of the control room and coax Presley into starting the session.

Putnam said Jarvis informed them there were seven new pop tunes to record, and there was material for a “country classics” album, tracks for a gospel album and a second Christmas album.

“I’m sitting there thinking we’ve only got the next four nights after tonight,” Putnam said. “Elvis says, ‘What’s the first song?’ He’s just so relaxed. I think it was to get us relaxed.”

He said Presley possessed “good human traits” he undoubtedly learned from his family.

Putnam said Presley’s music remains popular in other parts of the world, and still is in rotation on radio stations outside the United States.

He said he’s played Elvis tribute shows in Brazil with 12,000 people in attendance. Putnam said he was once told there is something distinctly American in every country in the world — Coca-Cola and Elvis Presley.

Briggs said he was at Quadrophonic Studios in Nashville when he received a call from his then girlfriend, Linda Thompson, informing him of Presley’s death. He said the actress and former Miss Tennessee once dated Presley.

Briggs then tried to contact members of Presley’s road band, who were at the Nashville airport. By the time he located them, Briggs said they already heard about Presley’s death.

He took the despondent musicians to Julian’s, a restaurant in Nashville, and bought them a meal.

“That was their livelihood,” he said. “They had just lost their jobs.”

Before his days with RCA, Presley recorded his first tracks at Sun Recording Studios in Memphis with the great Sam Phillips, a native of Florence.

Being the son of the “Father of Rock ‘N’ Roll,” Jerry Phillips said he and his brother, Knox, grew up differently than other people.

“I remember dad bringing home his record,” Phillips said of the first Presley track, “That’s All Right, Mama.” “He wanted us to hear it. It was what he was looking for all along. He was very excited about it.”

Phillips said he has great memories of Presley, dating back to his childhood.

He said Presley would visit the Phillips home, but it would be late at night.

“Elvis could never get out until after midnight, or he would absolutely get mobbed,” Phillips said. “If he stopped at a service station, within 10 minutes there would be a mob. “

He said Presley would drop by their home after midnight, and Phillips’ parents would let him and his brother get up and miss school the next day to spend time with Presley.

“Elvis was a very special person, a very humble individual,” Phillips said. “At the top of his game, he was the most handsome guy you’d ever seen in your life, the coolest guy you’d ever want to meet.”

He said Presley always would have more than one woman with him. Phillips said it was true Presley would address his parents as Mr. and Mrs. Phillips.

Presley played in Sheffield at least three times in the late 1950s, and there are photos of him purchasing chicken and snack cakes at the railroad depot in Sheffield.

“He was one of the biggest influences in my life,” Phillips said. “He would come sit around with a guitar in the living room and play music. He was the biggest star in the world, but he was still very polite and humble.

“I have great memories of Elvis Presley.”