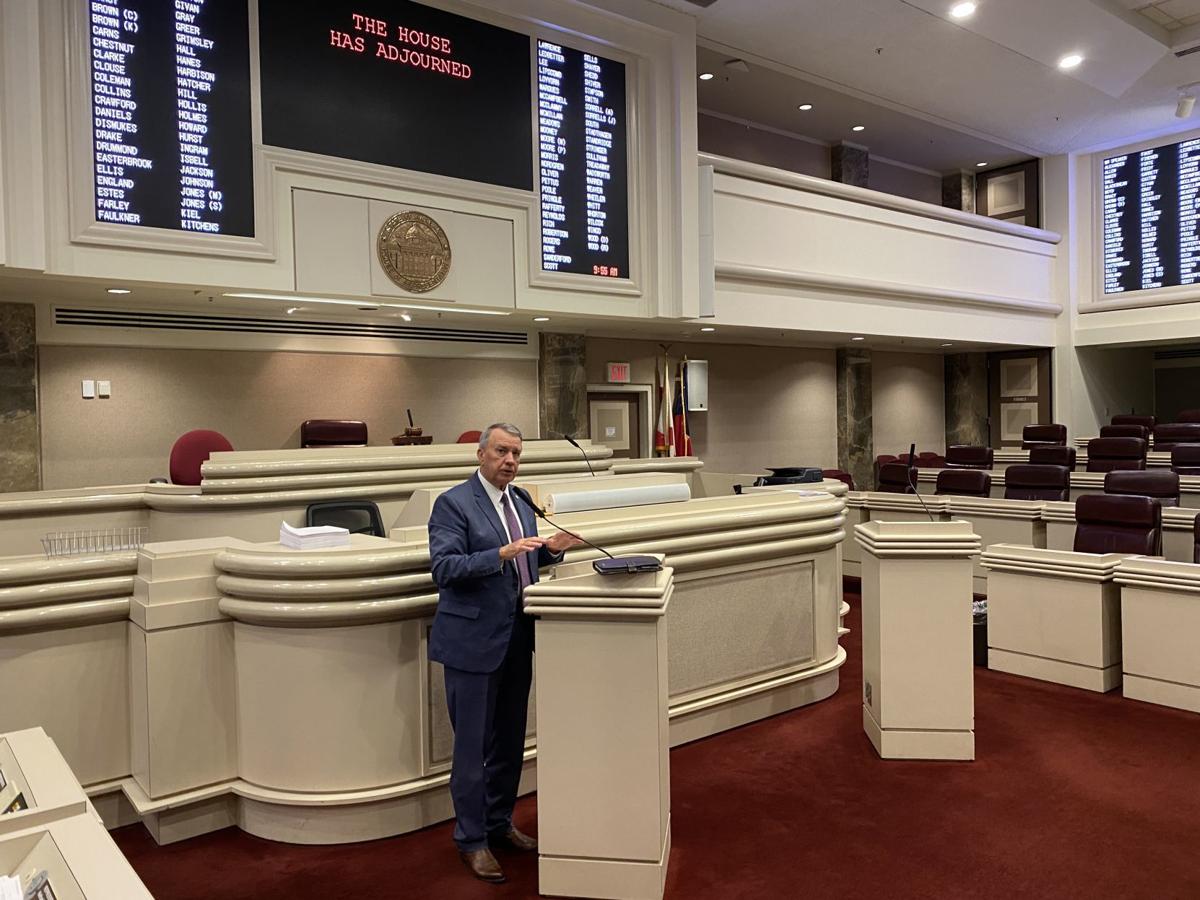 House Speaker Mac McCutcheon presided over a mostly empty House chamber on Thursday as most of the 103 members of the Alabama House of Representatives stayed home on what was to be the Legislature's 13th meeting day. The House is adjourned indefinitely amid the growing outbreak of the new coronavirus. [PHOTO: ALABAMA DAILY NEWS] 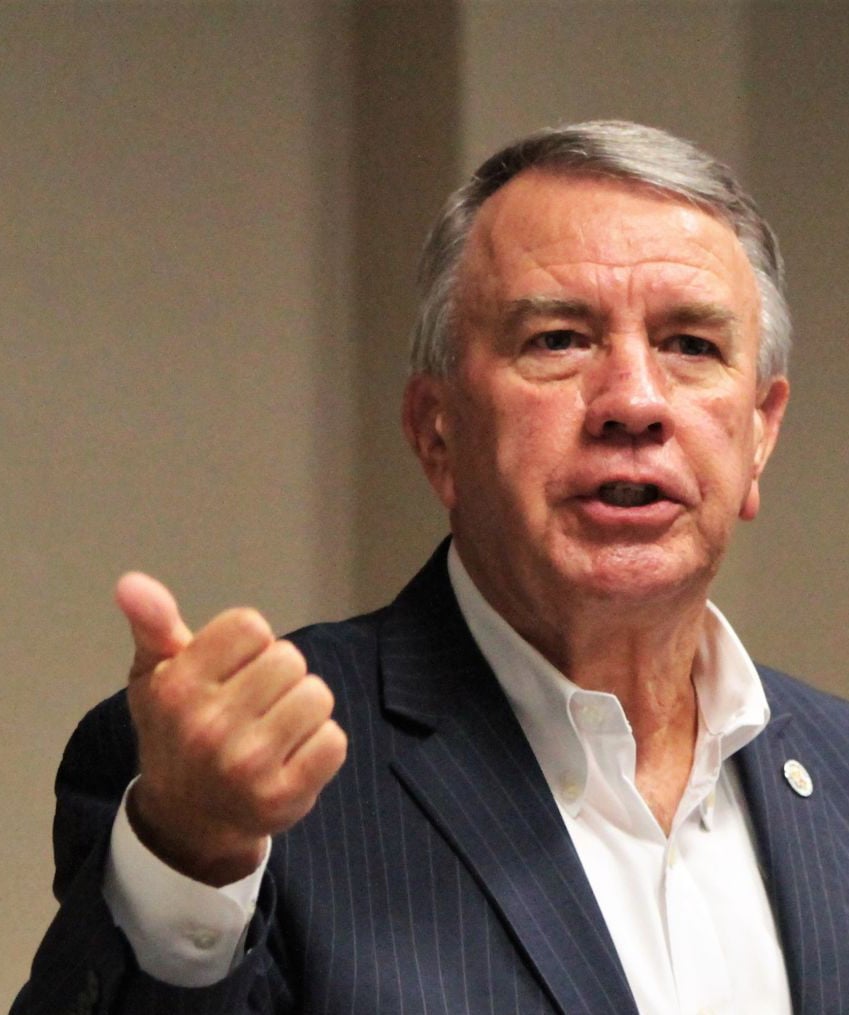 House Speaker Mac McCutcheon presided over a mostly empty House chamber on Thursday as most of the 103 members of the Alabama House of Representatives stayed home on what was to be the Legislature's 13th meeting day. The House is adjourned indefinitely amid the growing outbreak of the new coronavirus. [PHOTO: ALABAMA DAILY NEWS]

The only other lawmaker in attendance was state Rep. Nathaniel Ledbetter, R-Rainsville, who serves as the House Majority Leader.

That was by design as legislative leaders had asked the other 103 members of the House of Representatives to stay home rather than travel back to Montgomery for what was supposed to be the Alabama Legislature's 13th meeting day.

With no quorum present in the eerily quiet State House building, the House of Representatives now stands adjourned indefinitely amid the growing outbreak of the new coronavirus.

McCutcheon, R-Monrovia, couldn't say when he thought the session would resume.

"We don't have a definite date that we'll come back and resume business," McCutcheon said while speaking to reporters from the floor of the House. "We're looking, working with the Department of Public Health. We're working with the medical advisers in the state trying to see at what point in time the curve may flatten, if you will. And so all of those things are coming into play as we make a decision."

McCutcheon mentioned the close quarters in which the lawmakers work when in session.

Inside the chamber, most members operate at desks that are connected to each other and the halls of the State House are narrow, making it almost impossible for a full building of lawmakers, staff, lobbyists and the public to adhere to the six-feet social distancing guidelines.

"There are things that we need to be very mindful of in the decision process of meeting for the session. And those are the things that we're discussing now with the Senate. How can we conduct the business of the people?

"We've got legislators out there from 105 districts in this state," he said. "We've got people that are touching every area of the state coming into one room, in one place conducting business. As Speaker, that's one of the things I'm very mindful of in terms of the health and welfare of the members and not spreading the [virus]."

With less than half of the 2020 regular session completed, lawmakers had yet to tackle many of the high-profile tasks, including passing the state's education and General Fund budget.

McCutcheon acknowledged that plenty of legislative work remained. He said the budgets would likely be a priority whenever the session resumed.

There's one problem: Under Alabama's constitution, the regular session may last no longer than 105 calendar days. That clock runs out on May 18, potentially before the state will be in the clear from the coronavirus pandemic.

"You start with the budgets because they're so important, especially to our education community," McCutcheon said. "School districts need to know what their budgets can be because they will start in mid-summer planning for the next school term."

Senate leadership gathered Thursday on a conference call to discuss the upper chamber's plans, a leadership aide said. They are scheduled to reconvene on Monday, but will only handle administrative matters, including choosing a date to reconvene the session.

According to a memo from Senate Majority Leader Greg Reed's office, April 28 is the date being proposed as the restart for the session in the Senate, though it is not set in stone.

Lawmakers could meet for four or even five legislative days per week, instead of their normal two or three, in order to make up for lost time, the aide said.

Lt. Gov. Will Ainsworth, who presides over the Senate, this week became one of the loudest elected voices in Alabama urging proactive actions to stop the coronavirus from spreading.

"This is a serious situation and is becoming more and more threatening everyday," Ainsworth tweeted Wednesday. "It WILL spread exponentially in the future and we must slow it down now. Everyone MUST follow the orders given and practice social distancing to protect lives."

McCutcheon also said economic development bills would be prioritized when the Legislature returns, whether during this session or a potential special session after May 18.

Two industrial recruitment statutes are set to expire this year — the Growing Alabama Tax Credit and the Alabama Jobs Act.

Passed in 2015, the Alabama Jobs Act consolidated and modernized myriad tax incentive programs used by the Department of Commerce to recruit industries.

The Growing Alabama Act established a separate tax credit that local economic development organizations can use to build industrial parks or other job-attracting sites.

"We have some bills that deal directly with our economy and operation of business in the state, such as the renewal of the tax credit bills," McCutcheon said. "Those are things that directly impact some major companies in this state, so it needs to be addressed during this legislative session, or at least during this fiscal year as we move forward."

Lawmakers had just begun to make major progress on prison and criminal reform legislation before adjourning for spring break two weeks ago.

McCutcheon says those bills remain a priority, but that the courts and Department of Justice, which have been urging reforms, would understand the delay caused by the virus outbreak.