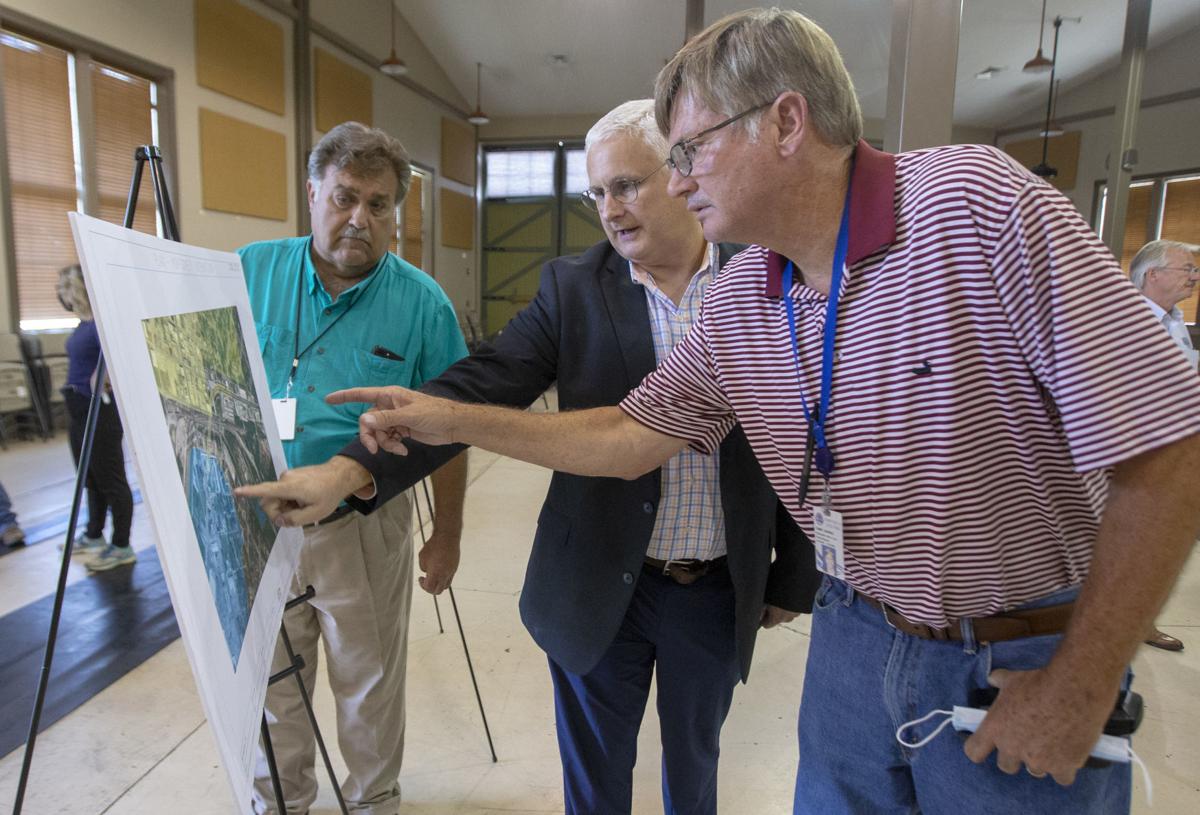 Scott Cothron with Skipper Counsulting explains one of the 5 options for a proposed railroad crossing to Colbert County Administrator Roger Creekmore and county Commissioner Tommy Barnes during a Thursday meeting at the Roundhouse in Tuscumbia. [MATT MCKEAN/TIMESDAILY]

Scott Cothron with Skipper Counsulting explains one of the 5 options for a proposed railroad crossing to Colbert County Administrator Roger Creekmore and county Commissioner Tommy Barnes during a Thursday meeting at the Roundhouse in Tuscumbia. [MATT MCKEAN/TIMESDAILY]

Of the five, overpasses at Montgomery Avenue and Cox Boulevard in Sheffield seemed to make the most sense from a traffic and cost benefit standpoint, according to members of the firm and local public officials.

Volkert and its subcontractor, Skipper Consulting Inc., were selected to conduct a feasibility study of the best locations to build an overpass over the tracks.

The issue has been around for years, but leaped back into the forefront in the past several years as Norfolk Southern trains began stopping on tracks in Sheffield, Tuscumbia and Muscle Shoals for long periods of time, blocking busy railroad crossings.

"A feasibility study is an analysis and evaluation of proposed alternatives to determine if one or more are technically, environmentally and economically feasible," said Ashley Adams, who works in Volkert's Business Development section.

The most popular options involved a five-lane overpass that would begin on Second Street, cross over the railroad tracks at an angle and end in the vicinity of South Montgomery and West Montgomery Avenue.

The Montgomery Extension option includes a roundabout near the intersection of South and West Montgomery avenues.

A third options involves branching off Cox Boulevard and crossing the tracks at an angle and connecting with Avalon Avenue in Tuscumbia at King Avenue.

Of the three, the two-lane Cox Boulevard option has the lowest estimated construction cost of $11,667,000.

Two other options included in the study are the Columbia Extension, a $9,716,873 project involving a two-lane overpass over the tracks on Columbia Avenue, and an underpass that begins on Commons Street in Tuscumbia. That option is estimated at $15,830,038.

He said the option makes sense because of the existing traffic flow along that route, and offers the least inconvenience to the public.

Sheffield Mayor Ian Sanford said he favors the Montgomery Grade Separated option, then the Cox Boulevard option. Ultimately, he said he wants the overpass where the public wants it.

"I don't want to dictate where it goes," Sanford said.

Sanford said he would also like to see more detail of that option, which will likely come after the choices are narrowed down.

"We want the best one," Tuscumbia Mayor Kerry Underwood said. "We want to be sure the money is there before making a commitment. It's something that's needed."

Jesse Turner, the transportation planning director for the Northwest Alabama Council of Local Governments, said an in person public meeting is being planned for late July, but an online option is also being worked on that would allow people to view the options and submit a comment form.

"This was a time for us to show what we've come up with to our stakeholders," Turner said.

The stakeholders were more than government officials. The meeting was attended by representatives of the Colbert Emergency Management Agency, Helen Keller Hospital, Sheffield Utilities and the Alabama Department of Transportation.