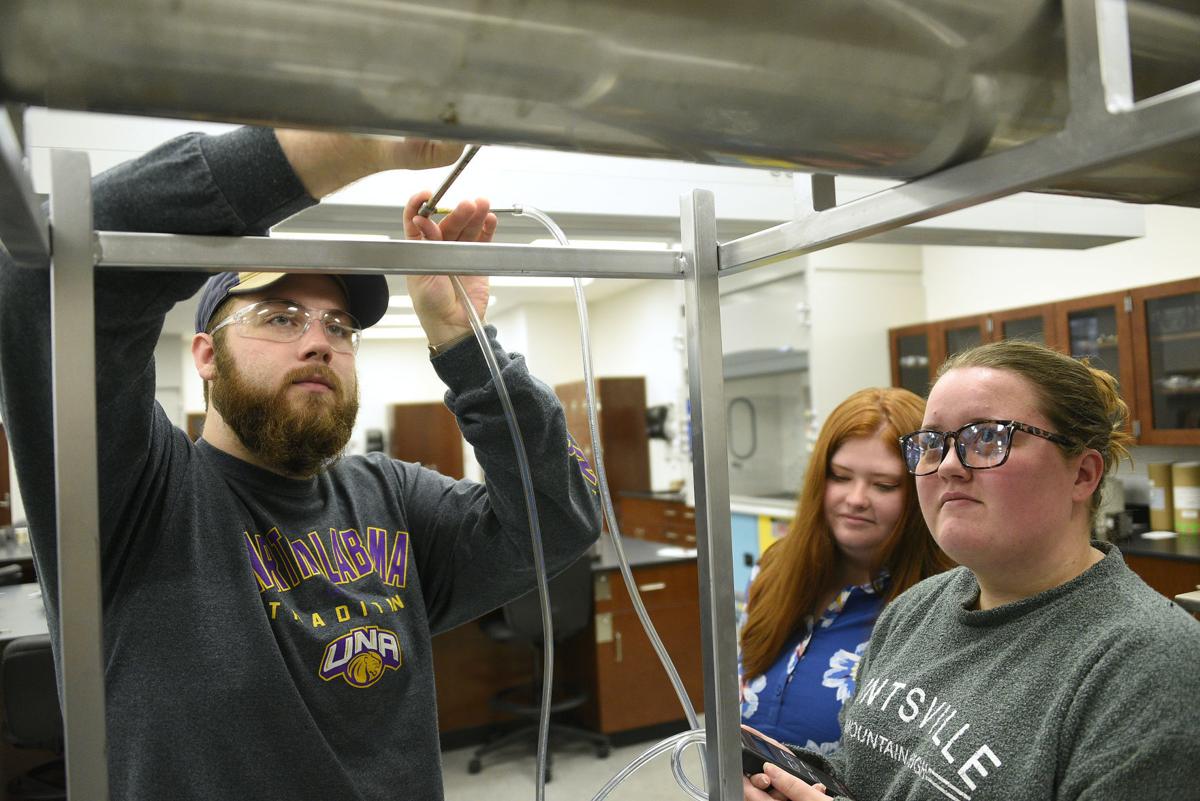 University of North Alabama students Paul Brumlow, Brook Murgatrlyd and Ashtan Hicks, who are studying industrial hygiene, use a velometer to check the air from a local ventilation system for contaminates. [PATRICK HOOD/TIMESDAILY] 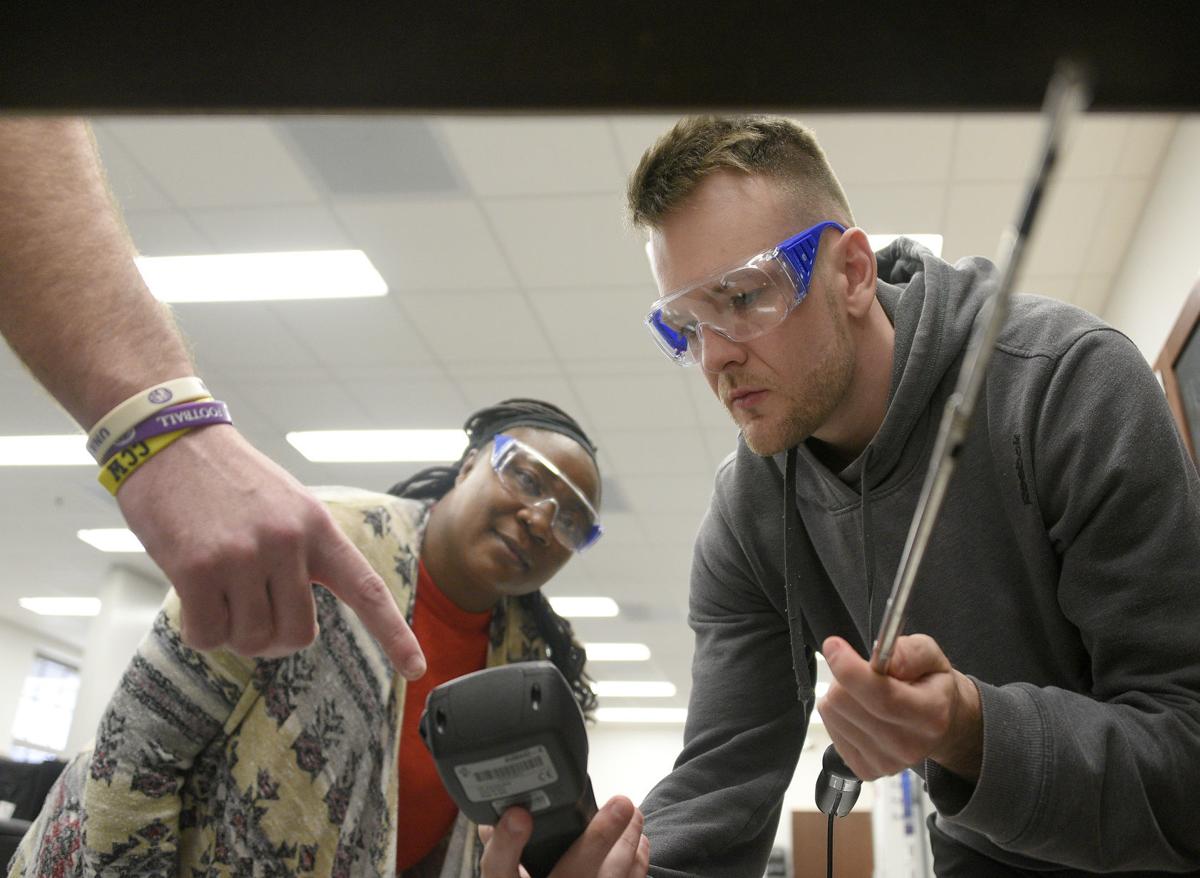 UNA students Pate Wear and Yeinyai Quewea get some instructions on how to use a velometer to check for contaminants from a ventilation system. [PATRICK HOOD/TIMESDAILY] 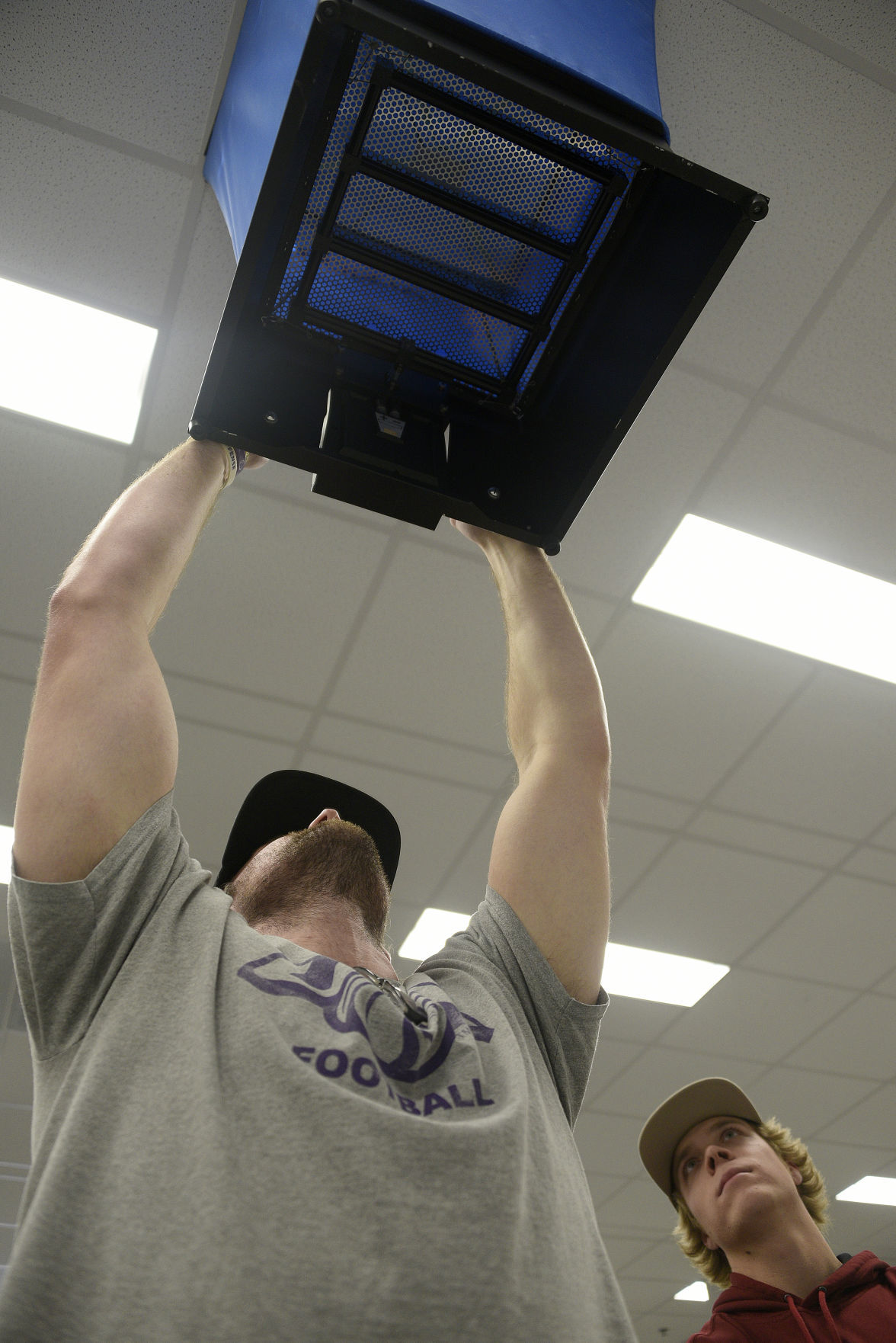 University of North Alabama students Paul Brumlow, Brook Murgatrlyd and Ashtan Hicks, who are studying industrial hygiene, use a velometer to check the air from a local ventilation system for contaminates. [PATRICK HOOD/TIMESDAILY]

UNA students Pate Wear and Yeinyai Quewea get some instructions on how to use a velometer to check for contaminants from a ventilation system. [PATRICK HOOD/TIMESDAILY]

FLORENCE — Students studying industrial hygiene at the University of North Alabama are doing so in a program ranked second in the nation for occupational health and safety degrees, according to Value Colleges.

Value Colleges, an organization that provides information on college costs and programming, recently released a list of the nation’s top 25 occupational health and safety degrees for 2019.

Institutions were ranked based on three factors — reputation, based on U.S. News and World Report; return on investment, based on PayScale data; and cost, based on online tuition reported to IPEDS.

UNA’s industrial hygiene program ranked second only to the University of Houston-Clear Lake.

Ross Alexander, provost and vice president for Academic Affairs, said the ranking is a testament to the quality of the program.

It is one of only four across the country to be accredited by the Applied and Natural Science Accreditation Commission of the Accrediting Board for Engineering and Technology (ABET).

“It consistently produces graduates that fill high-paying, in-demand jobs in several growing sectors in Alabama and beyond,” he said.

UNA students who complete the program, introduced in the early 1970s, earn a double major in general chemistry and industrial hygiene. A chemistry minor is also available.

Kimbrough, who teaches classes in industrial hygiene, said the program aims to help students grasp scientific principles in chemistry and understand how they can be used to achieve a safe workplace.

Kimbrough said about 40 to 50 students are currently in the program.

More than 100 industrial hygiene students have received financial aid through a NIOSH, or National Institute for Occupational Safety and Health, training project grant.

The grant has been renewed four times, serving students for a total of 21 years.

“They’ve been very complimentary of the double-major and how well it prepares our students to go out into industry because not only do we train them in industrial hygiene applications, they also understand … the science behind it. I think that is really what sets this program apart.”

Will Cabler, a senior in the program, said he believes the classes have prepared him well for his current internship with Southwire, as well as his future career in industrial safety.

“It’s definitely a great program,” he said. “The double major opens so many doors for you, and you can go in so many different directions with the program. The classes also definitely help in the field because it really aligns with what you’re doing.”

Cabler said his internship, a requirement of the program, takes it a step further by allowing him to apply what he’s learned in class. It's also introduced him to other aspects of the job that can't be taught in a classroom.

He said UNA faculty members have also let him borrow equipment for his senior capstone project on noise monitoring, something he has dealt with at Southwire.

“They offer us assistance and help with anything we need,” he added.

For information on UNA’s industrial hygiene program, go to www.una.edu/chem-ih.

Received that degree back in the early 1990's and worked in the field of industrial hygiene until 1999. A velometer does not check for "contaminates". It only determines the velocity of the air, usually in feet per second. Knowing the internal dimensions of the duct, you can then calculate air flow, which is usually measured in cubic feet/second. Correct air flow determines how well the system removes contaminates.