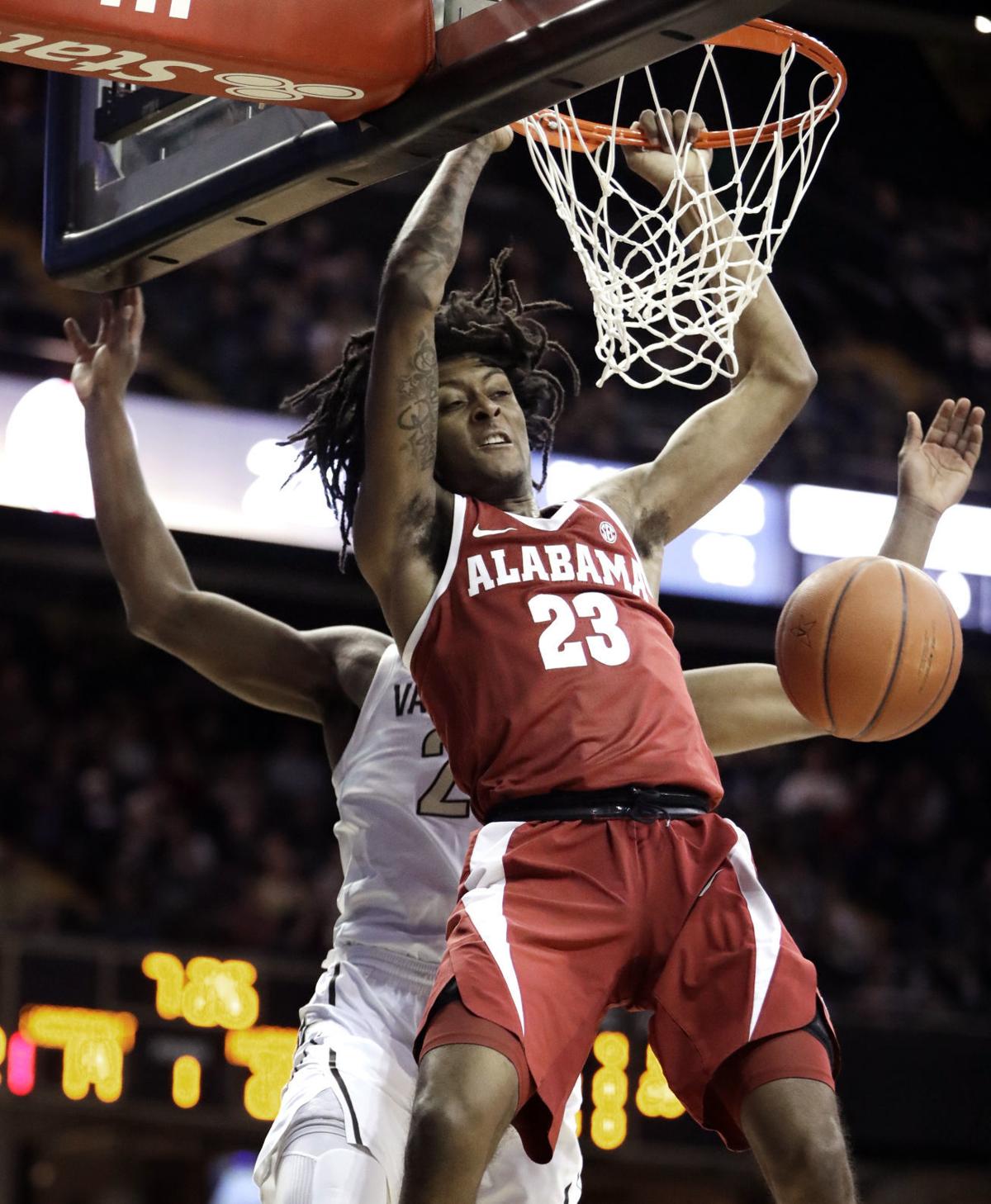 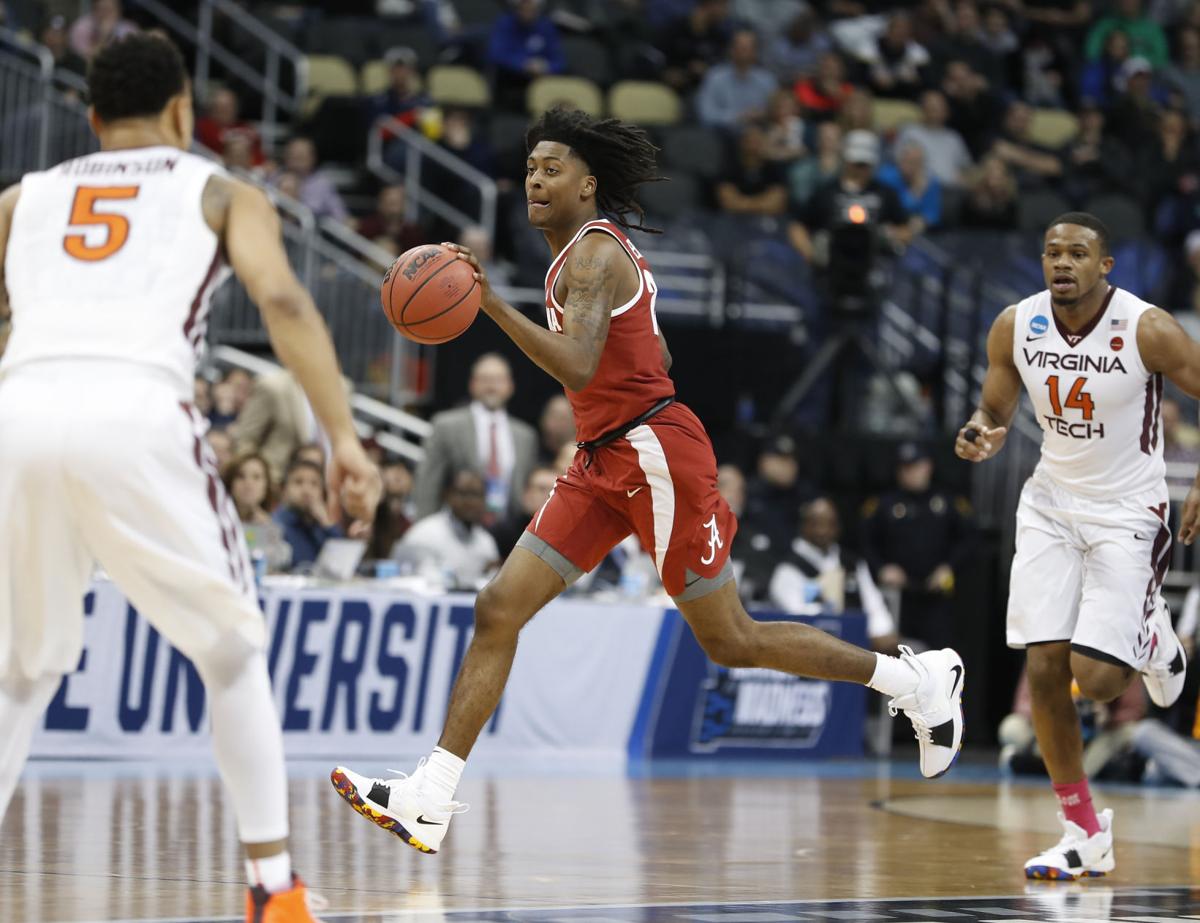 Alabama's John Petty brings the ball up the floor in the 2018 NCAA Tournament against Virginia Tech. He and his girlfriend, Tamarra Fletcher, have a 20-month-old daughter named Aubreille. [ROBERT SUTTON/UNIVERSITY OF ALABAMA]

Alabama's John Petty brings the ball up the floor in the 2018 NCAA Tournament against Virginia Tech. He and his girlfriend, Tamarra Fletcher, have a 20-month-old daughter named Aubreille. [ROBERT SUTTON/UNIVERSITY OF ALABAMA]

TUSCALOOSA — Aubrielle Petty’s legs wobble as she stands atop her grandmother’s knees, her eyes focused on the action in front of her.

The infant spots a familiar mop of dreadlocks racing down the Coleman Coliseum court and yells out, “Yeah, Daddy!”

John Petty Jr. usually can’t hear his 20-month-old daughter while on the court, but he feels her presence anyway.

Later, during a timeout, Alabama’s 6-foot-5 junior wing looks up from in front of the Crimson Tide bench, and the two catch each others’ eyes.

Still trying to catch his breath, John flashes a smile and waves to the stands. Aubrielle’s own smile stretches across her face as she waves back.

“It just adds more motivation, because I can look up in the stands, and I see her up there clapping,” the junior Petty said. “Or before the game, they’ll bring her down to the rail, and I’ll hug her, give her a kiss, and it just adds an extra little boost to my game. It just lets me know that this is what you’re playing for, these people are who you’re playing for, and you can’t let them down."

Aubrielle Nicole Petty was born March 2, 2018, in Petty’s hometown of Huntsville, the day before he played a game at Texas A&M.

An exhausted Petty, who was in the delivery room for his daughter’s birth, managed 7 points on 3-of-7 shooting and pulled down a team-high eight rebounds while playing a game-high 37 minutes in the 68-66 loss.

Petty, a former four-star standout from Mae Jemison High in Huntsville, is in his third year as an everyday starter at Alabama (3-4), where he leads the team with 52 rebounds and 20 3-pointers on 45.5-percent (20-of-44) shooting from beyond the arc.

He's also second on the team averaging 15.1 points and 33.4 minutes per game through the first month of the season and is coming off a standout performance at the Battle 4 Atlantis Tournament with a team-best 67 points and 20 rebounds over Alabama's three games in the Bahamas.

For much of his past two seasons in Tuscaloosa, Petty’s smallest fan has made it to nearly every Crimson Tide home game and even several road contests, joined by Petty’s mother, Regena, one or both of his sisters and, at least this season, his high-school sweetheart and his daughter’s mother, Tamarra Fletcher, a fellow former Jemison basketball player who graduated last spring.

John Petty Jr. was in study hall Friday night when his phone buzzed with a text message from his pregnant girlfriend, Tamarra: “My water broke.”

The 18-year-old freshman called to see if this was all a prank.

Petty notified an Alabama team staffer and the two made the 2 ½-hour drive to Huntsville to be in the delivery room for Aubrielle’s arrival.

“It was like she waited for him to get there because right after he got there, 10 minutes later, I was at 10 centimeters,” Fletcher recalled. “And after I had her, they gave her to me, … and at first, when I had her, she was crying.

“And then once he got her, she stopped crying,” Fletcher said. “He was emotional, and it was a different vibe and feeling I’ve never felt before after she came out.”

In that moment, Petty found purpose.

“When they finally let me hold her, it was like everything (else around disappeared). It was like there was a straight tunnel from my face to her face,” Petty said. “And I still remember the feeling, it was unbelievable. I actually cried, because it was just the most special moment I’ll probably ever feel in my life, until I have another one. But in that moment, it was the best feeling I’ve ever felt.”

When she first learned her son was having a child, Regena Petty was disappointed and upset. Parenthood at that point was not in the plan.

“It did, it really hurt me for a minute, but, you know, I eventually got over it.”

After much prayer, Petty’s mother got on board and has provided guidance and assistance. But coming to terms with being a teenage father was much harder for Petty, whose own challenges as a full-time Division I basketball player several hours away from his family had just begun.

“It kind of affected me a little bit, just worrying about her mother before she had (Aubrielle),” Petty said, “worrying about her and making sure everything was OK, and I never knew when she was going to come.”

Up until the last several months, it was difficult even to get time to visit Huntsville, between class, practice, study hall and workouts.

Balancing his responsibilities as a new parent and a student-athlete weren’t easy, but advice from his mother helped.

“I said, ‘It’s a job, and you put yourself in this position, so now you have to take care of business.’ It’s not about you anymore, it’s about her,” Regena said. “So when you’re on that floor, you think about her. … I’ve told him nothing’s easy, but when you’re out there grinding, and you think about your daughter, that’s going to make you go even harder, that’s going to make you smile.’”

Growth on, off the court

As a sharpshooting wing who built his game around his prowess from outside the arc, Petty often fell victim of his own expectations. During his first two seasons at Alabama, a missed 3 would snowball into a difficult shooting drought, which then affected other aspects of Petty’s game.

But with the arrival of first-year Crimson Tide head coach Nate Oats and his shoot-it-if-you’ve-got-it mentality, Petty has found a renewed confidence, one that has been reinforced off the court as well.

“Being a father, you can’t hold onto stuff, so it actually ties back into basketball. You can’t hold onto a missed shot because you might get another shot the next play,” Petty said. “With being a parent, you can’t control what your child does, because she’s a baby. … It all ties in together, and (Oats) tells us you’ve got to move onto the next play because the game don’t stop just because you miss a shot. And she’s not going to stop doing (stuff), just because she’s a baby.”

Oats — who has three daughters himself between the ages of 15 and 7 — has provided Petty a welcomed example of fatherhood done right.

“I think he’s come full circle,” Oats said. “When I came (to Alabama), there were people with comments, warnings ‘not sure about John,’ but I think he’s misunderstood to be honest with you. Once you really get to know him, he’s a really good kid ... and he’s trying to be the best father he can be while he’s still in college.”

Having a daughter has expedited Petty’s personal development .

“She changed me a lot. When she came into this world I just started looking at things different,” Petty said. “I think about her before every decision that I make, I think about my family, her mother, because they’ve been with me for the longest. You have to think about them every step I take.”

Along with finding scoring success within Oats’ system, Petty’s also found an affinity for rebounding, averaging a team-leading 7.4 per game with 36 defensive boards and 16 on the offensive end — many of which led to second-chance points for him or his teammates.

“I think he’s come a long, long ways trying to be a leader on this team and playing hard whether his shot’s going in or not, and I think that speaks to the maturity that he’s showing,” Oats said. “There’s a maturity level that comes with being a father that we’re seeing out of him, and I think there’s a lot of different combinations in his maturity, but certainty having a daughter is one of them.”

Because in his role as Aubrielle's father, Petty found the one shot he's never going miss.

“She just means the world to me. There’s nothing on this earth that means more to me than her,” Petty said. “I’d give up everything — if I had to give up basketball just for her, I would do whatever it takes just for her. It’s an unconditional love. … Just being able to see her, her smile at me, her call me ‘Daddy,’ her hug me, it’s something you could never possibly imagine unless you have a daughter or a child.”