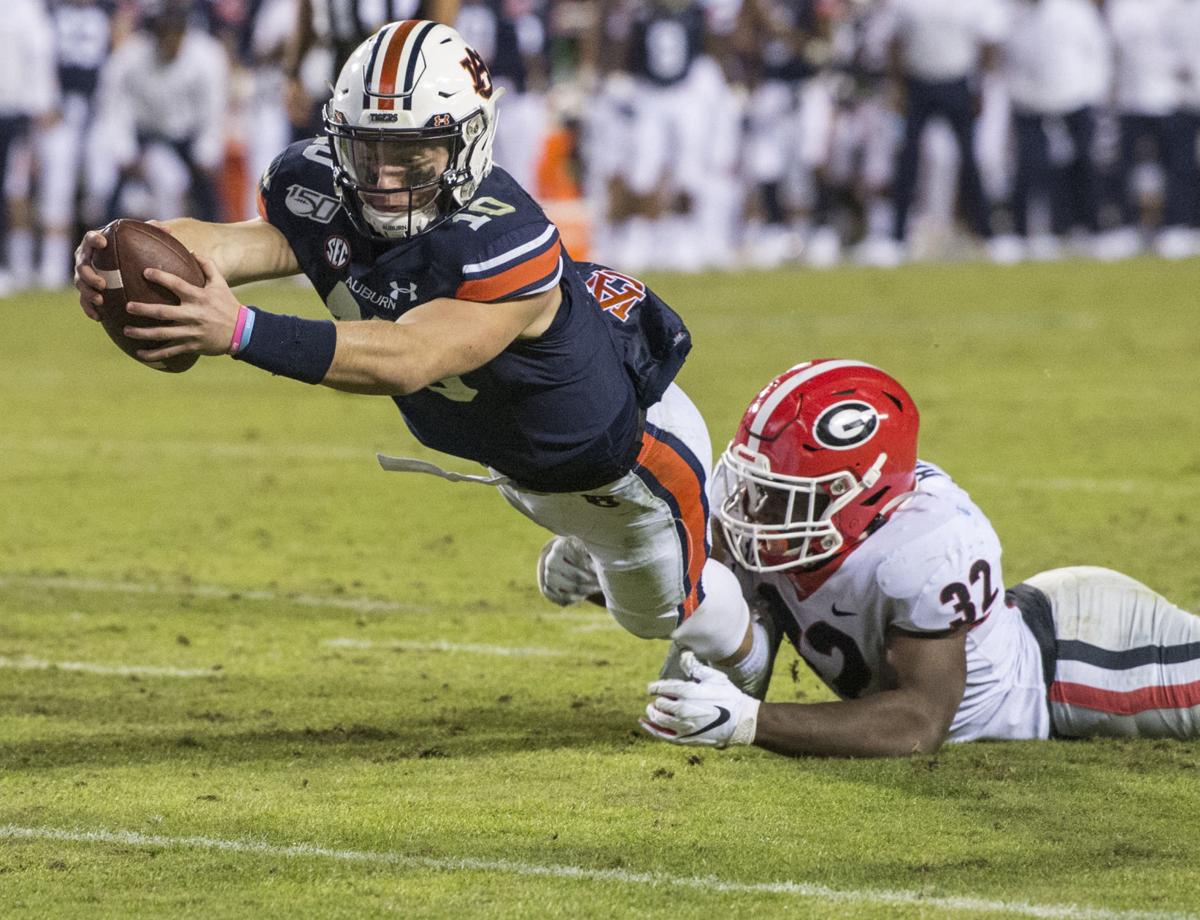 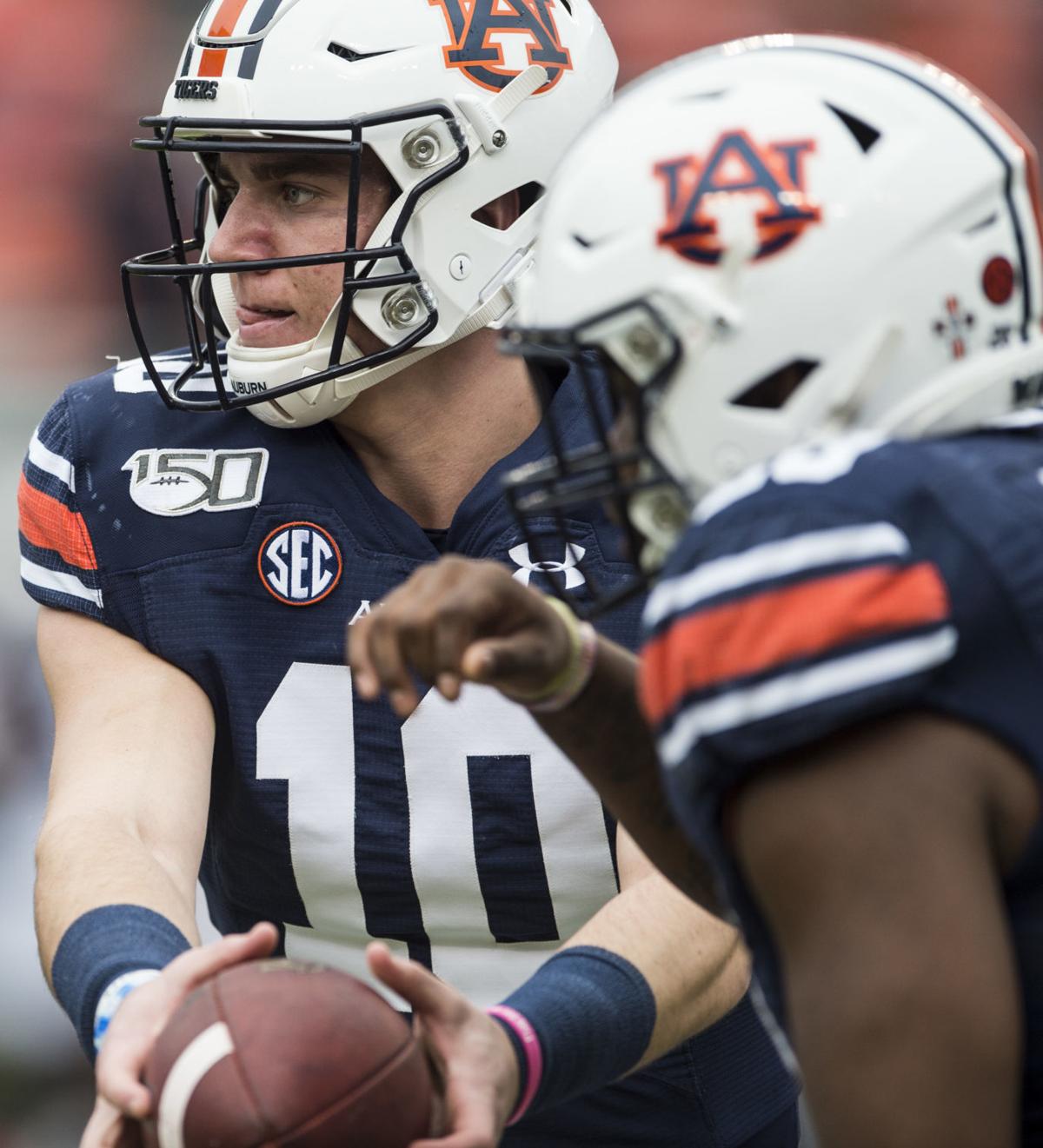 Auburn quarterback Bo Nix (10) hands the ball off during warm-ups before the Samford game. Nix will have to play his best game Saturday for Auburn to beat Alabama. [JAKE CRANDALL/MONTGOMERY ADVERTISER]

Auburn quarterback Bo Nix (10) hands the ball off during warm-ups before the Samford game. Nix will have to play his best game Saturday for Auburn to beat Alabama. [JAKE CRANDALL/MONTGOMERY ADVERTISER]

AUBURN — On third-and-6 inside the red zone this past Saturday, in the driving rain, Bo Nix took a shotgun snap from center Nick Brahms, faked the sweep, rolled ever so slightly to his right and floated a pass toward Harold Joiner, who had leaked out of the backfield.

It wasn’t the same play that Auburn had tried on fourth-and-2 from the Georgia 34-yard line in the midst of a furious comeback attempt, but the action — rolling right, throwing to Joiner — was similar.

Nix missed the latter. He threw the ball too hard and too far behind Joiner, who reached back and got a hand on the ball but would have had a difficult time hauling it in no matter the circumstances. The second time around, though, the true freshman quarterback was on target — Joiner caught the ball in stride at the 13-yard line and ran virtually untouched into the end zone for the score.

“It was a completely different play,” Nix said afterwards, “but it was really good — especially in the rain — to complete it.”

That throw won’t mean all that much this Saturday, when No. 15 Auburn hosts No. 5 Alabama in Nix’s first Iron Bowl at Jordan-Hare Stadium. It put the Tigers up 21-0 against a Samford team that has one of the worst defenses in the FCS. The Crimson Tide, like Georgia, have one of the top 15 defenses in the FBS.

The point, though, is that Nix has gotten better this season. That’s important, because if Auburn is going beat Alabama on Saturday, it will need the true freshman quarterback to be at his best.

“He’s learned this year against the toughest defenses probably in all of college football,” said Gus Malzahn, who has a chance to be only the second head coach to beat Nick Saban for a third time at Alabama. “And this is another one. That really helps your learning curve. It accelerates learning. I think he’s got a good command of our offense and the personnel he has around him.”

Four of those quarterbacks (Kelly, Watson, Lawrence and Burrow) threw for more than 300 yards and threw at least three touchdowns. That’s not a requirement, though — Stidham completed 22 of 29 passes for 240 yards and one touchdown in that 2017 game (he also ran for a score), and Auburn won 26-14 thanks in large part to a stellar defensive effort.

The only things those five quarterbacks have in common is that they were efficient — all had ratings better than 140 — and they didn’t throw an interception.

And while the true freshman has thrown six interceptions this season, he hasn’t thrown any at Jordan-Hare Stadium, where he is completing 63.9% of his passes for 1,438 yards (239.7 per game, 7.5 per attempt) and six touchdowns. In fact, he’s gone 135 consecutive attempts without one dating back to the second quarter of the loss at LSU.

“I think that says a lot about his decision-making,” Malzahn said. “Protecting the football, I think, is the No. 1 thing, especially when you’re playing in big games. It allows you to call plays and trust the quarterback that we’re not going to turn it over. That is very impressive, especially for a young quarterback for the defenses that he’s went against.”

And, like the head coach said, the Crimson Tide have another one of those top defenses. There is a narrative that it has not quite lived up to the Saban standard, especially after getting shredded for 559 yards and 46 points in that loss to LSU. But Alabama still ranks 15th nationally holding opponents to 4.7 yards per play and is tied for 10th with Auburn allowing just 16.2 points per game. It’s the only defense in the entire country that hasn’t allowed a play of 50 or more yards, and it has allowed only two of 40 or more.

“They’ve been really good at stopping the run. They are really talented in the secondary. They’re going to have some really good players,” Nix said. “They are young at certain positions with some injuries and things like that, but they are obviously going to be well-coached and well-prepared and very sound at what they do. We just have to find ways to make explosive plays and move the ball consistently.”

Those are the types of defenses that Nix and the entire offense have had trouble with this season. Against FBS teams with losing records — Kent State, Mississippi State, Arkansas and Ole Miss — the Tigers are averaging 552.3 yards and 45.5 points per game. Nix has completed 71.4% of his passes for 253 yards per game and six touchdowns to zero interceptions.

Against the winning teams, though — Oregon, Tulane, Kent State, Florida, LSU and Georgia — it has been a struggle. The offense is averaging just 324.3 yards and 21 points per game. Nix has completed just 50% of his passes for 171.8 yards per game and thrown seven touchdowns to six interceptions.

Road losses at Florida and LSU stand out most. Nix completed worse than 43% of his passes, totaled fewer than 160 passing yards, threw twice as many interceptions (four) as touchdowns (two) and finished with a rating of worse than 85 in both games.

“I feel like each one of those games has prepared me for this game. Each one has gotten a little bit bigger and bigger,” Nix said. “Obviously, I haven’t played as great in some of them as I would have liked to, but I just continue to grow and get better, just learning the environment and how to control it and how to control the emotions, the many things that go on in the game.”

It’s not difficult to see the strides Nix has made since that loss in Baton Rouge. Given that the run game has had a hard time finding much room against an offensive line that doesn’t deliver much push up front, Auburn asked its true freshman quarterback to attempt 94 passes in two games against Ole Miss and Georgia. He completed 60 of those attempts (63.8%) for 585 yards, threw for one touchdown and ran for two more.

The Tigers still lost that game against Georgia, 21-14, but Nix nearly brought them all the way back in the fourth quarter, completing 13 of his first 16 passes for 123 yards as he led them on two straight touchdown drives before that fourth-down incompletion to Joiner. It proved too little, too late against a defense that had gone into a prevent-mode zone defense trying to avoid giving up the big play, but it did give the offense hope that it can finally have success against a top defense in the Iron Bowl.

“You’ve seen some things change. He grew as a person more and grew as a player more,” wide receiver Seth Williams said of how Nix far Nix has come since those losses against Florida and LSU. “You can see he studies even more and studies even harder and everything. He doesn’t want — like, those feelings like that, it’s bad. It’s hard on him and his team. So he’s grown a lot as a player.”

It’s funny: Nix, the true freshman making his 12th career start, will actually be the most experienced quarterback on the field Saturday. Rather than going toe to toe with perennial Heisman Trophy candidate Tua Tagovailoa — who was lost for the season with a hip injury — he’ll be up against backup Mac Jones, who is older than Nix but has attempted only 90 passes in 24 career games.

But Nix will let the defense worry about his counterpart and his tremendous group of weapons at the skill positions. The Auburn legacy has been to four or five Iron Bowls in his life and has watched probably all of the others. He was at Jordan-Hare Stadium on a recruiting visit the last time the Tigers won.

He knows that it’ll take maybe the best performance of his career to date to make his own mark on the biggest football game his home state has to offer.

“It's been a lot of years building up to now. The fact that it's actually here…” Nix said. “We'll focus in on this week and work on them and figure out a game plan to move the ball on offense.”