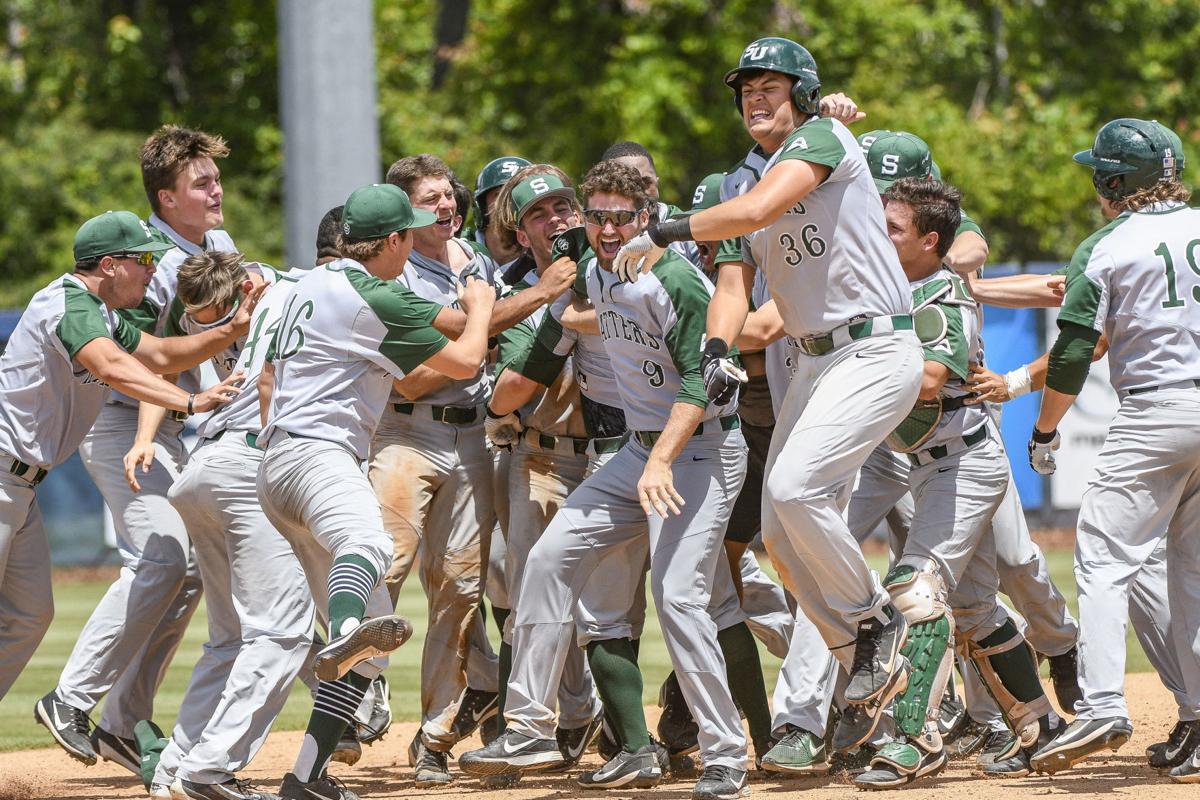 Stetson players celebrate their victory over Jacksonville University in the ASUN Conference tournament in May. [ROMEO T. GUZMAN/STETSON UNIVERSITY ATHLETICS] 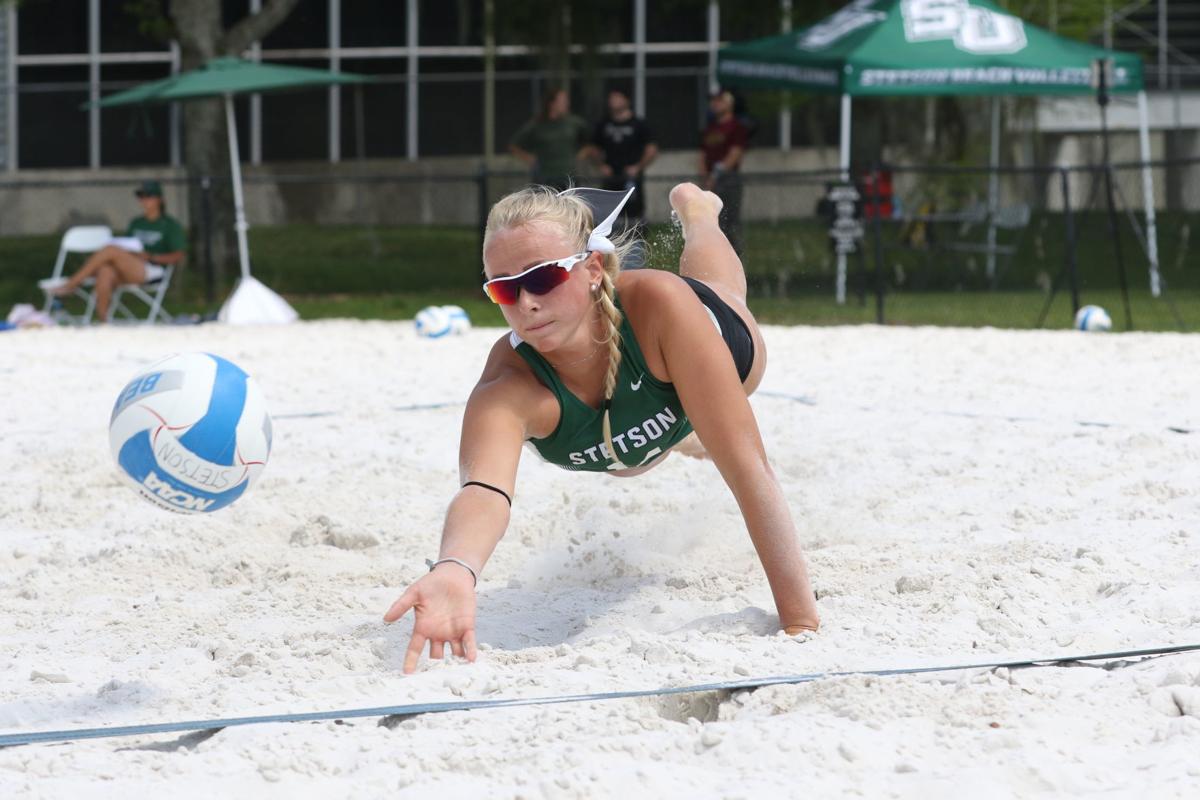 Stetson has dominated the ASUN in beach volleyball, winning four of the past five conference titles. [COURTESY STETSON UNIVERSITY ATHLETICS]

Stetson players celebrate their victory over Jacksonville University in the ASUN Conference tournament in May. [ROMEO T. GUZMAN/STETSON UNIVERSITY ATHLETICS]

Stetson has dominated the ASUN in beach volleyball, winning four of the past five conference titles. [COURTESY STETSON UNIVERSITY ATHLETICS]

Steve Trimper admits his affinity for Stetson University came from the visitors’ dugout at Melching Field at Conrad Park.

That’s where Trimper, then the baseball coach of Maine University, forged a friendship with the now-retired legendary Hatters head coach Pete Dunn.

“He was one of the coach’s that you always wanted to play against,” said Trimper, the Hatters’ third-year coach who took last year’s ASUN champion all the way to an NCAA super regional appearance. “I always wanted to get them on the schedule. We would get a two-week spring break in Maine, and they would be way ahead of us. We’d just be getting out of the gym when we came down here and wouldn’t be hitting on all cylinders. But coach Dunn would always come up to you after the game and shake your hand and tell you how hard you played.”

Through those spring break visits, a friendship was formed. When Dunn decided to retire after 37 years and 1,312 wins after the 2016 season, he called Trimper.

“He told me I should throw my name in the hat,” Trimper said. “When they offered it to me, it took me about 30 seconds to say yes.”

Trimper was hired and is now the ultimate Northern snowbird and one of DeLand, Florida’s most recognizable celebrities, especially after flirting with the Stetson’s first College World Series appearance.

At Stetson, a private institution with one of the ASUN’s smallest enrollments, athletics have “been a significant and critical part of the university’s growth initiative,” according to athletics director Steve Altier.

Altier said the goal of the growth initiative was to increase the school’s population by “roughly 45 percent” for the fulltime undergraduate population.

Altier, a former baseball player at Stetson, said in the past five to eight years, Stetson has exceeded its goals, hitting them earlier than anticipated.

Stetson has prioritized upgrading the athletic programs that were at lower levels of funding during the past eight years. At the same time, he said the school has been trying to enhance the programs that already were among the best in the conference.

“We wanted to make sure we remain at the top of the league which is becoming more and more competitive every year,” he said.

Baseball has long been at the forefront of Stetson athletics, producing such household major league names as Jacob deGrom of the New York Mets and Corey Kluber of the Cleveland Indians, two pitchers currently in the mix for the Cy Young award in the National League and American League.

“Since the 1970s it has been a preeminent sport, so we have invested in it,” he said. “We had a coaching transition and we were able to hire a national coach who has done a great job. Our beach volleyball team, when we brought it in we said we wanted it to be the top in the conference and we have dominated the league since its inception. For us, that has been a priority.”

Being a small, private university with an annual cost of $60,000, Altier said Stetson has to reach a national audience in an effort to reach its enrollment target. He said that differs from public institutions that draw from their back yard.

Playing in what is termed a mid-major conference such as the ASUN, Altier admits competing for national championships is difficult, if not impossible.

Altier said that goal isn’t as modest as it sounds.

“Sometimes I don’t think we recognize how significant the level of competition is within the ASUN Conference,” he said. “If you are winning a conference championship in whatever sport it is, you are competing on a national level, a top 25 level.”

He pointed out the success ASUN golf teams have had in advancing to the NCAA tournament, along with Florida Gulf Coast’s men’s basketball program that won three games in the NCAA

“Once they win our league, they are highly national competitive programs,” he said. “It’s the same thing with all of our (ASUN) sports.”

Trimper, meanwhile, loves his new home. He’s confident Stetson, with its already rich baseball tradition, can make a name for itself along with the Coastal Carolinas, Cal-Fullerton and Rice of the Division I landscape. Six Hatters were selected in the June Major League Baseball draft and another signed as a free agent. Four of his incoming players also were drafted.

“We try to build off our tradition,” he said. “We are trending up. I feel strongly about the program that we are one of those few mid-majors that can compete nationally on a consistent basis.”

Meanwhile, Altier would love to see the other sports at Stetson follow that same path.