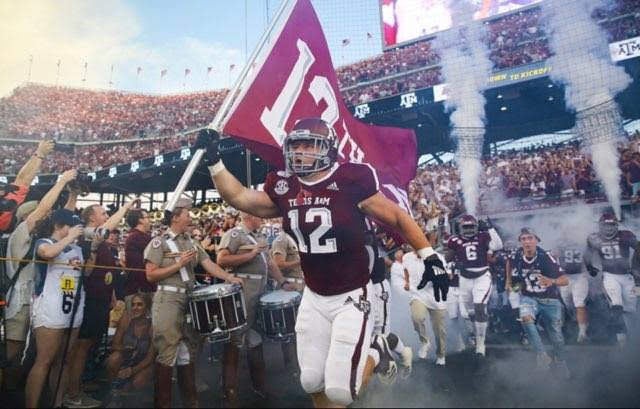 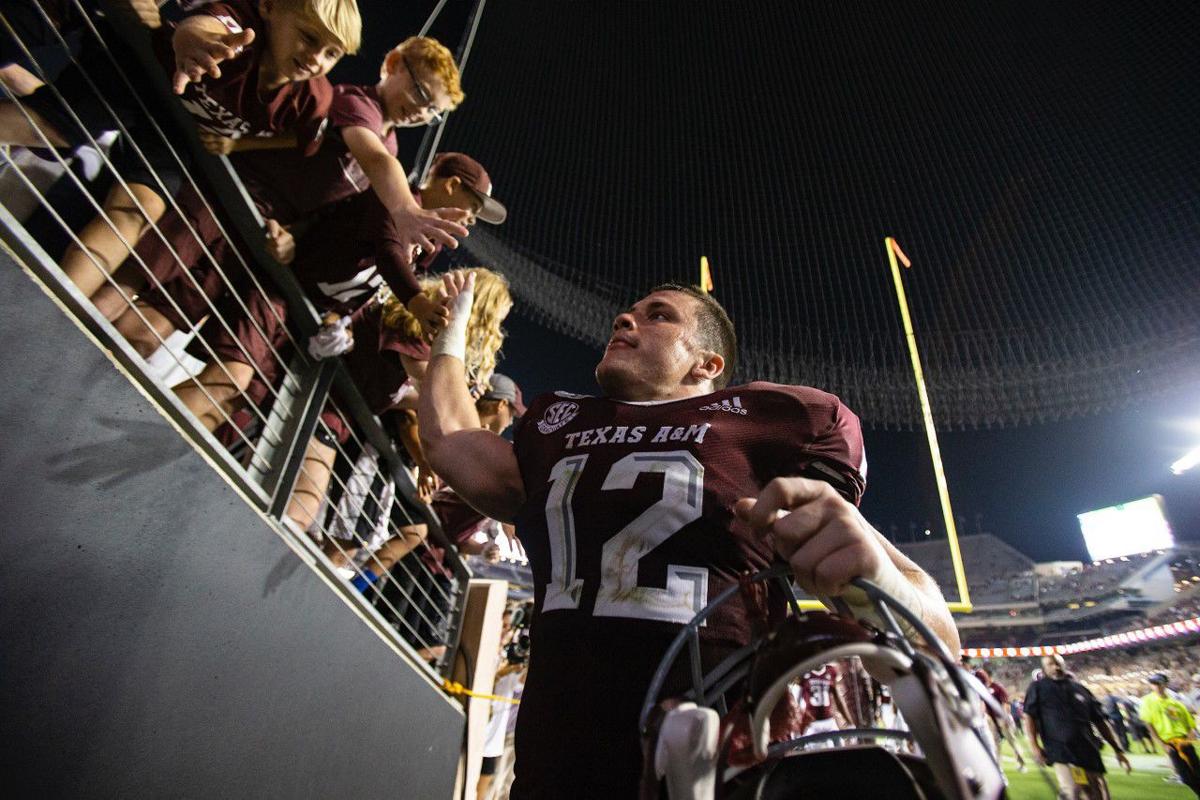 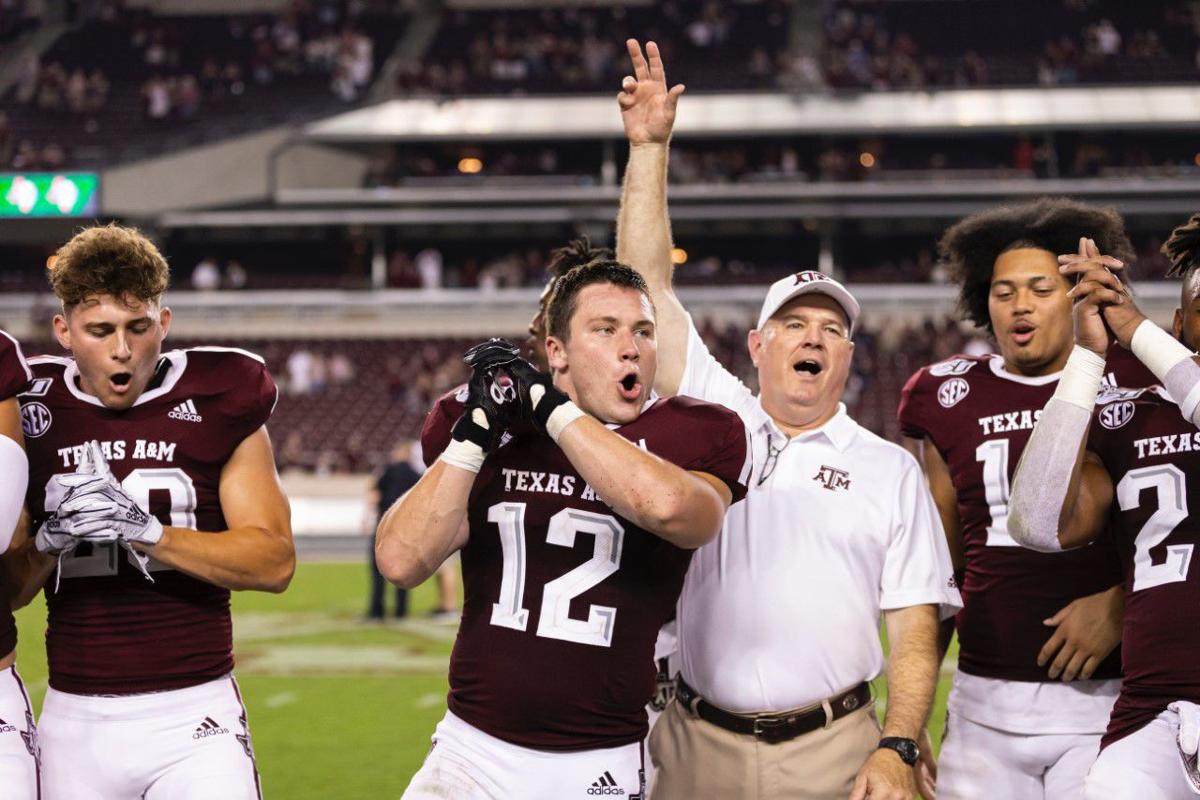 Much has changed for Braden White in the last month.

A graduate of Florence High School, White started a Masters program in marketing in August at Texas A&M University.

But the more public change in his life concerns his jersey number for the Texas A&M football team, which last month switched to No. 12.

To understand why that matters requires understanding something about the 12th Man, a legend blending two of Texas A&M's favorite topics – football and tradition.

In 1922, according to the school, a scout player named E. King Gill was helping reporters identify players in the press box when coaches realized they were running out of players and waved him down to the field.

Gill put on a jersey under the bleachers and helped the Aggies win. In the years since then the school has referred to its fans as the 12th Man, and select players have been chosen to represent the student body on the field with the 12th Man jersey.

The 12th Man concept is so much a part of the school’s identity its athletic website is called 12thMan.com.

A special teams player and reserve linebacker, White was not chosen 12th Man because of his prominence on the team but because – in the eyes of his coaches – he was seen as the kind of hard-working, team-oriented person who ought to wear it.

In recent weeks, White has learned all about Gill and the 12th Man history. White might not have played as much as he would like so far, but the 12th Man is about being ready to help the team when needed, and that’s what White plans to do.

“For me,” he said, “it’s probably the biggest honor of my life.”

Cathy White remembers watching her son Braden’s attitude change as he prepared for football games before he was even in high school.

“He would just shift into a ‘Time for business, time to play ball’ serious mode,” she recalled Tuesday. She used to wonder if something was wrong until she got used to it.

Braden was not the first boy Cathy had ever known to take football seriously. Her husband, Braden’s father Brad, played defensive line at the University of Tennessee from 1976 to ’81 and then played for the Buccaneers, Colts and Vikings over several years.

But Brad does not like when parents push their kids into something and had no interest in doing that with Braden.

It seems Braden was making his own choice as a youngster to take football seriously. Over the years Cathy has seen that drive manifest itself in and out of football, whether it’s academics or planning someone’s birthday party or working out in the offseason.

“He just doesn’t do things halfway,” she said of her son. “ … I just think it’s an innate part of his personality. I just think he doesn’t know how to do it any other way.”

As a high school player, Braden helped Florence to an 11-win season and trip to the Class 6A state semifinals in 2014. His Falcon teammates included Keaton Anderson, who went on to play at Alabama, and Erroll Thompson, currently a standout linebacker at Mississippi State.

He walked on to the team at Texas A&M, which is where Brad’s college teammate John Chavis was working as defensive coordinator at the time.

Braden was a scout team player as a freshman and named defensive scout team MVP. He made 13 tackles over 13 games as a freshman but got hurt early as a sophomore and played only five games. He was, however, named the team’s top conditioned athlete.

So far this year he has one tackle each against Texas State and Lamar.

“That’s going to be the biggest difference for us a lot of times.”

Brad acknowledges every athlete wants to play more and he encourages Braden to be ready when the time comes. (Braden played extensively late in last week’s game.)

“When you get into these SEC battles, it’s big boy against big boy,” Brad said. “And he’ll be ready.”

Being an Aggie has taken Braden to a number of well-known college football venues. His favorites have included the Dallas Cowboys’ stadium (often called “JerryWorld”), for the annual game against Arkansas; the Rose Bowl to play UCLA; and “the Swamp” at Florida.

“It’s been incredible,” Braden said. “It’s a great opportunity every week no matter who you’re facing, just being part of Texas A&M.”

Braden had a 3.96 GPA as an undergrad, and Brad said his son has not only gone downstate to visit former coach J.B. Wallace – now coaching Marbury – but he also visits the current Florence football team and likes talking with younger athletes in the Shoals.

“If you have a dream, go do it,” Braden said, when asked about his advice for younger athletes. “Don’t narrow yourself down just because other people say you won’t be able to do it.”

“I would never have figured it would be at a place like Texas A&M.”

Braden said hearing that he might not be a Division I player “definitely added to my motivation, but my biggest motivation was the people close to me that helped me along the way.”

Brad and Cathy have for now exchanged the orange of alma mater Tennessee for A&M maroon. They recently ordered No. 12 jerseys and are in the process of getting B. WHITE put on the back.

They attend every home game and many road games. They were in College Station last week as the Aggies handled Lamar, and they’ll be there again this week as Texas A&M opens conference play against Auburn.

Braden gets to lead the team onto the field with a flag that says “12th Man” in front of Aggie crowds that routinely push or even exceed 100,000.

“The biggest thing about A&M is really the tradition, the tradition and the people,” Braden said. “From the outside you can’t really understand it and from the inside it’s hard to explain it.”

Last week, people who know Braden sent Cathy shots of White leading the team onto the field they’d taken by holding their cell phones up to the TV.

Cathy, who said she once assumed a native Texan would probably be chosen as 12th Man, looked down last week from the stands and thought about the thousands and thousands of Texas high school football players who might have liked to be A&M’s 12th Man one day.

And yet Braden is the guy.

“It’s emotional, but it’s almost to the point of being surreal,” she said.

Brad said seeing their son lead the team onto the field is “over the top.”