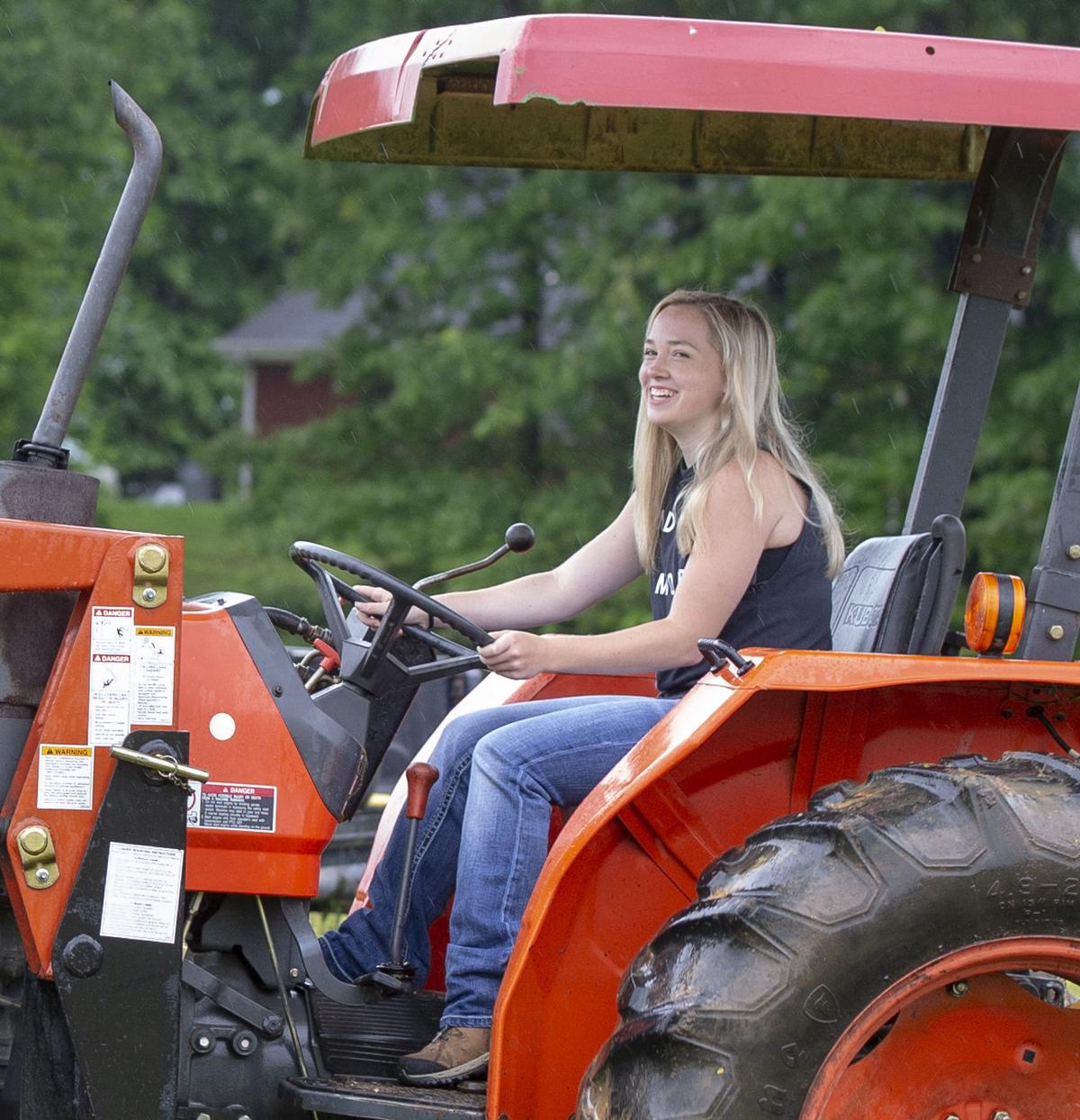 Katie Brooke Clemmons drives the tractor across the farm fields as her and her father Eric prepare to fix a downed fence. [MATT MCKEAN/TIMESDAILY] 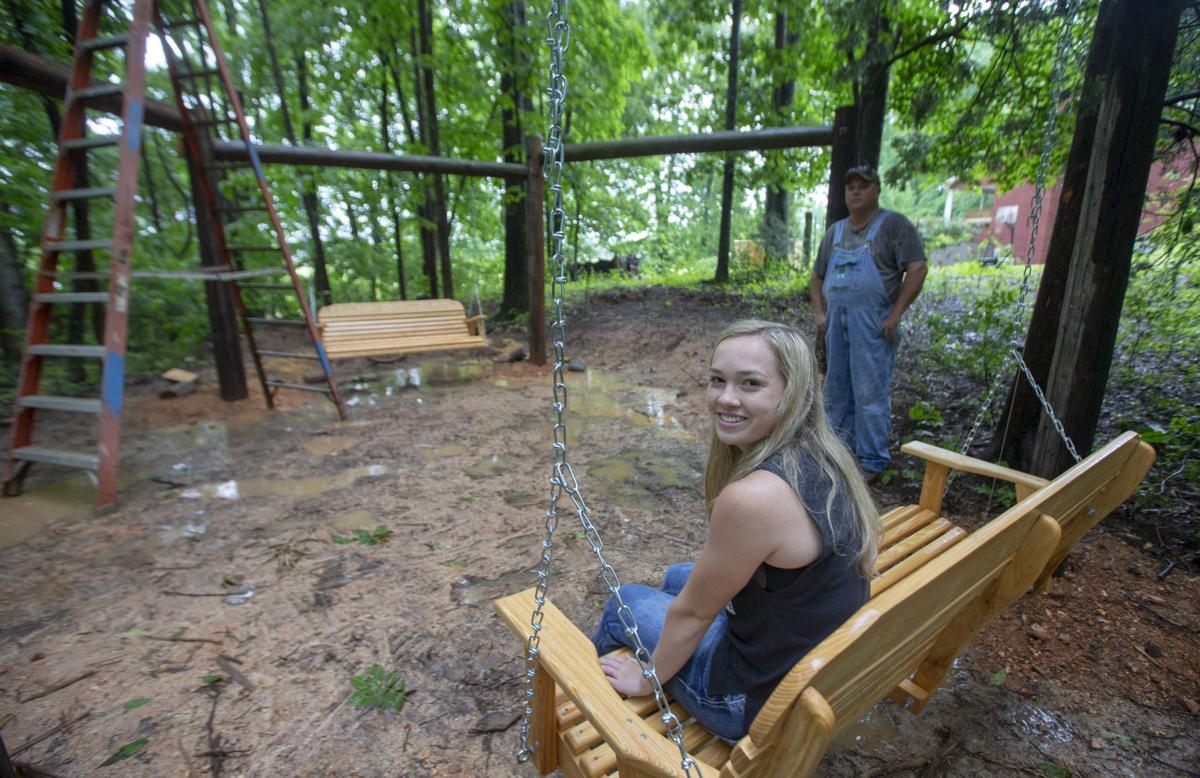 Katie Brooke Clemmons sits in a swing hanging in a pergola that she and her father Eric are building near their home.. [MATT MCKEAN/TIMESDAILY] 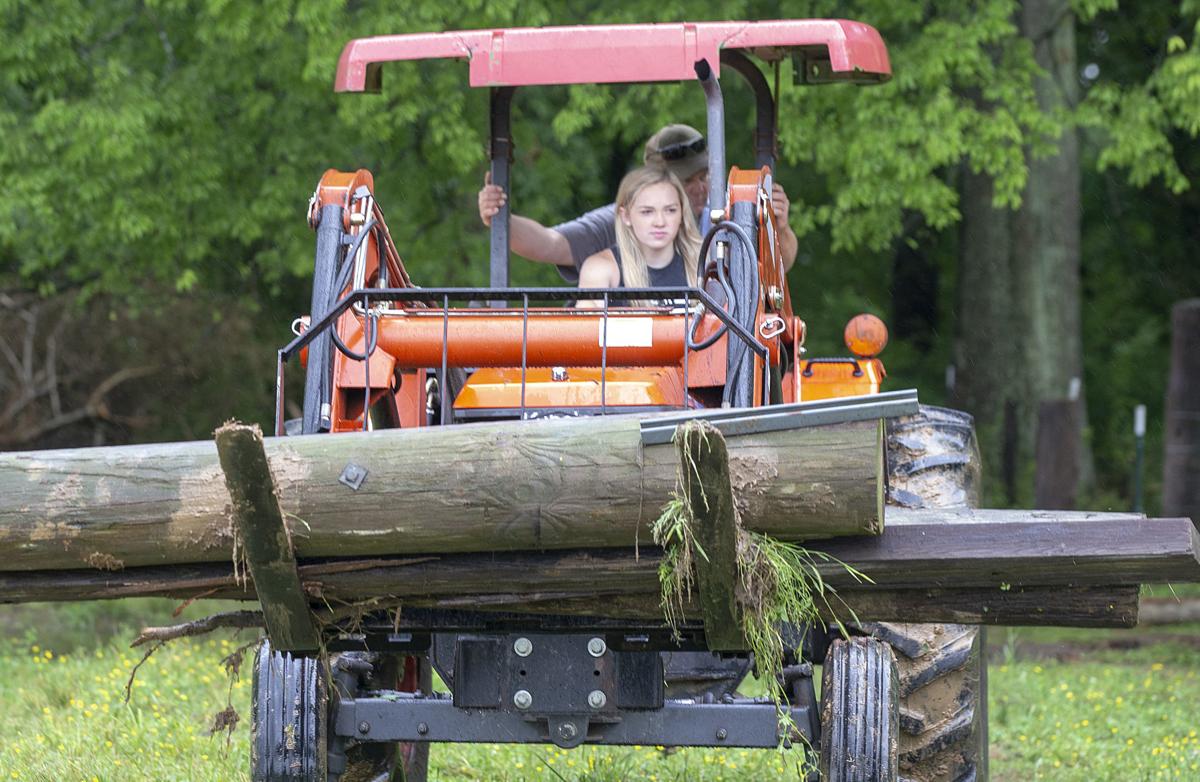 Katie Brooke Clemmons drives the tractor across the farm fields with her father Eric to fix a downed fence. [MATT MCKEAN/TIMESDAILY]

Katie Brooke Clemmons drives the tractor across the farm fields as her and her father Eric prepare to fix a downed fence. [MATT MCKEAN/TIMESDAILY]

Katie Brooke Clemmons sits in a swing hanging in a pergola that she and her father Eric are building near their home.. [MATT MCKEAN/TIMESDAILY]

Katie Brooke Clemmons drives the tractor across the farm fields with her father Eric to fix a downed fence. [MATT MCKEAN/TIMESDAILY]

GREENHILL — The wind rustles through the trees as Katie Brooke Clemmons quietly sits, taking in the scene at the bottom of the hill.

Her family’s farmland stretches out below, complete with two dozen cows moseying around for their dinner.

It’s a peaceful scene as she relaxes from the back porch, symbolic of what life has been over the last two months distancing from a pandemic.

It’s also a stark departure from what the Deshler basketball guard’s regular life had become. “The experiences I’ve had, just having that little time off, is wonderful to have,” Clemmons said. “I’m still working out, but it’s not with a bunch of people, and I’m thankful for the time I get to spend with my family.

“I’m enjoying doing a lot of stuff I normally wouldn’t be able to do.”

Clemmons, a rising junior, would normally be scrambling between school and basketball workouts with regular travel to Murfreesboro to practice with her travel team — the Tennessee Team Pride.

Instead, with so much shut down due to coronavirus precautions, Clemmons has had to make due at home.

And learning to cherish that, too.

“Everything was always very structured with school, training, workouts, practice, games,” mom Shannon said. “Now everything has slowed down.

Her helter-skelter lifestyle, at least for the last two months, ground to a relative halt.

“I won’t say we were missing life, but we were letting it fly by,” dad Eric said. “All of this has made us appreciate things.”

There has still been some basketball, but it’s been with a gravel court at the side of their house.

The hand-painted 3-point line — once a nod to the 5-foot-4 guard’s game — has long disappeared after so much use, nary a trace in site.

But nearby are other signs of what Clemmons has accomplished over the last two months with her newfound home time.

The new fence posts that help corral the cows are, at least now, a pleasant thought. They were also an education, both physically and mentally.

“Whew. Probably the hardest upper-body workout I’ve done,” Clemmons says, though her words — she fears — may be considered a challenge for Deshler coach Jana Killen and her personal trainer, Rayfield Ragland.

“I didn’t think it would be that hard.”

But her dad also made her use some math. Clemmons had to incorporate the Pythagorean theorem — A-squared plus B-squared equals C-squared — so she and her dad would know how long to cut the diagonal cross braces.

“Math was never stressed to me,” her dad said. “I tried my best to have her apply her knowledge from school to work.”

Clemmons has also used that time to solve a riddle that has flummoxed many a millennial. Her dad taught her how to drive a stick shift.

She’s taken to driving the tractor with enough precision that she’s trusted to drive it on her own. She’s also learned the intricacies of rotating tires.

Clemmons has done well enough — while also doing her home sports workouts — that her dad has helped her on a personal project. They’re building a pergola a few feet from the house.

About all that’s left to do is a roof. (It would be a perfect place for a Deshler team function, though getting there would require driving past Rogers High School.)

Clemmons, who also plays volleyball at Deshler, still does a twice-daily sports workout.

Running up and down the hill leading to her house is one way to warm up. Running around the block — in an area where the block wouldn’t fit a neat city grid — is a way to cool down. Her parents have about 40 acres while her close family has about 30 more.

“We love sports and we miss it, and a lot of people are upset that sports have been put on hold, but we’ve tried to be positive,” Shannon said.