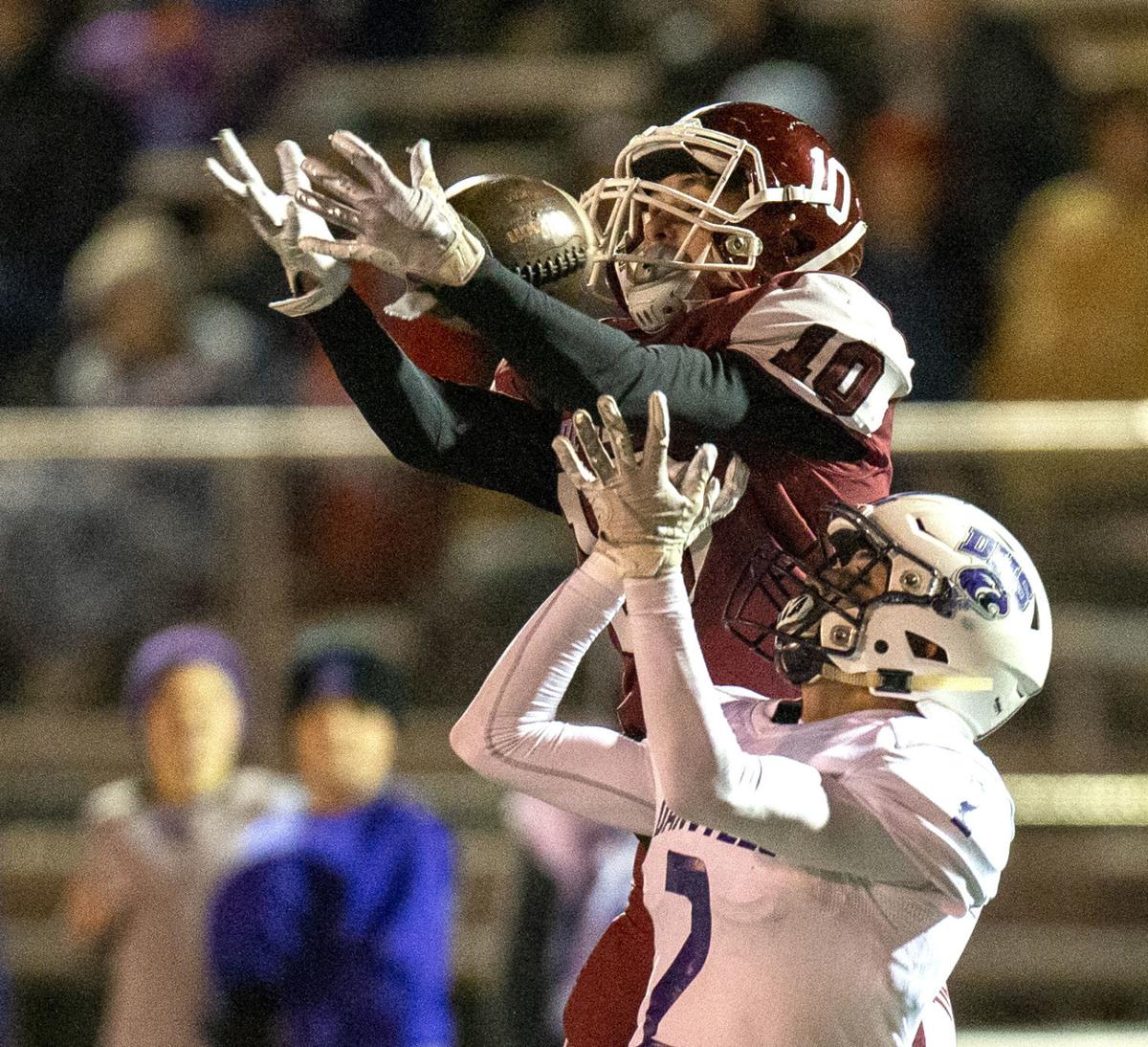 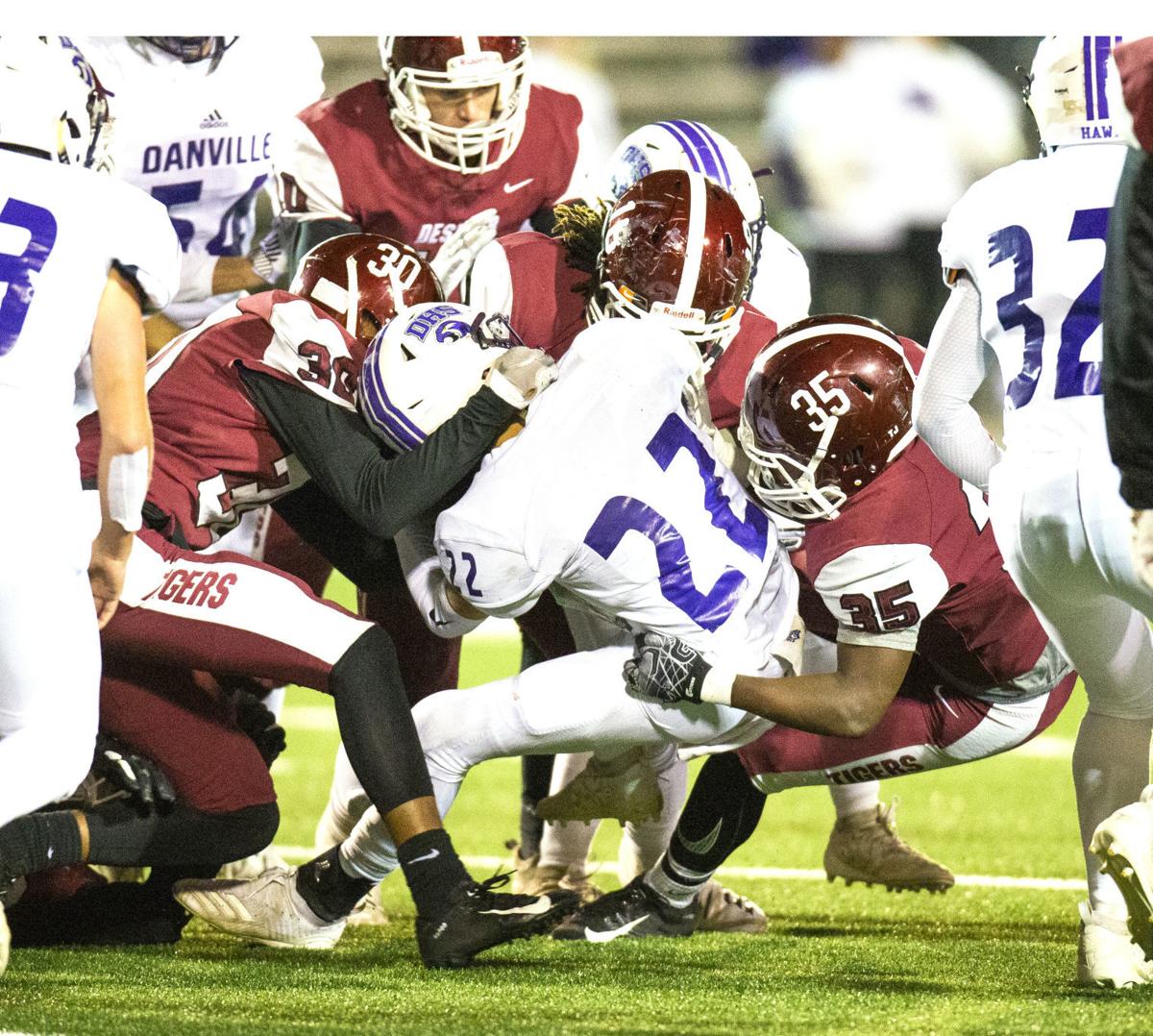 Deshler (8-3) used a variety of big plays to put away Danville early. Four of Deshler’s six touchdowns came on plays of 35 yards or longer, including Hogan’s runs of 73 and 66 yards.

The Tigers, who will host Oneonta next Friday, led 37-0 at the half. Danville’s only score came on a 9-yard run by Ethan Sapp with 3:01 to play.

Hogan opened the scoring with a 73-yard run on Deshler’s first place from scrimmage. Three minutes later, Mekyli Nance bolted 35 yards to make it 14-0. Hogan’s 66-yard run closed out a 21-point first quarter for the Tigers, who are trying to return to the Class 4A championship game.

Will Pilgrim’s 43-yard touchdown pass to Cody Collinsworth in the third quarter closed out Deshler’s scoring.

Hogan also had an interception for Deshler, while Nance carried four times for 82 yards.

After taking a 23-21 halftime lead, the Pirates (3-8) struggled in the second half and allowed Priceville (8-3) to rally for the win.

Rogers scored three touchdowns and a field goal on its four first-half possessions, while Priceville scored on three of its four possessions.

Jaxon Cross scored on runs of 2 and 25 yards and returned an interception 70 yards with 2:17 to play to lead Priceville. Jerry Burton finished with 206 yards and three touchdowns on runs of 2, 23 and 1 yard.

FAIRVIEW — Fairview spotted Central a 6-0 lead and the rolled to a 44-20 win to oust the Wildcats in the first round of the Class 4A playoffs.

Tyler Simmons and Tyvn Ellis scored two touchdowns each for Fairview (9-2), which won its first playoff game since 2010.

Fairview led 14-6 at the half, then scored three times in the third quarter to seal the win.

SCOTTSBORO – Jonas Mees kicked a 26-yard field goal with 4:57 to play and Scottsboro held Russellville twice in the final five minutes to escape with the first-round win.

Cam Bass rushed for 168 yards on 26 carries and Jacob Manning ran for a score and threw for another to lead Scottsboro.

Manning’s 3-yard run gave Scottsboro an early 7-0 lead, but Jacob Bishop found TJ King with a short pass that turned into a 65-yard touchdown play as Russellville tied it with 34 seconds to play in the second quarter.

Boots McCulloch raced 54 yards to give Russellville (8-3) and 14-7 lead late in the third quarter. The lead was short-lived, though. Scottsboro returned the kickoff 54 yards and then Manning hit Braden Cloud with a 23-yard TD pass to tie it.

After Mees kicked the go-ahead field goal, Cloud intercepted Bishop on Russellville’s next drive, and the game ended after the Golden Tigers were called for roughing the kicker after forcing a Scottsboro punt with less than a minute to play.

Michael Garcia hit an early field goal, and Robert Johnson made a second-half touchdown run, but Hamilton fell to Guntersville 32-9 in the first round of the Class 5A playoffs.

Hamilton missed the playoffs from 2016-18 — the Aggies' longest stretch since the 1980s – and coach Rodney Stidham thought that hurt Friday.

Asked why the game was so different from most of the Aggies’ results this season, Stidham said “I think our lack of playoff experience.

“I think we were so jacked up with emotion at the beginning of the game … we hadn’t been there in four years. I think it really made a difference.”

Garcia’s field goal was about 30 yards and came on Hamilton’s first drive and cut Guntersville’s lead to 8-3.

Hamilton was still in the game when Johnson scored from about 35 yards out, but the Aggies committed consecutive 15-yard penalties late in the third quarter and Stidham felt momentum shifting further to Guntersville.

Hamilton’s 8-3 record was its best since 2013. Guntersville (8-2) advanced to play Mortimer Jordan.

“I hope the younger players build on what our seniors have built,” Stidham said. “We’ve got a really good core of guys coming back.”

How would you grade President Trump’s response to the COVID-19 outbreak?