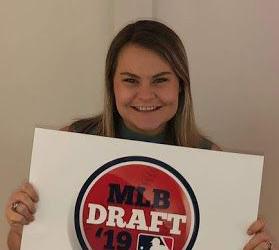 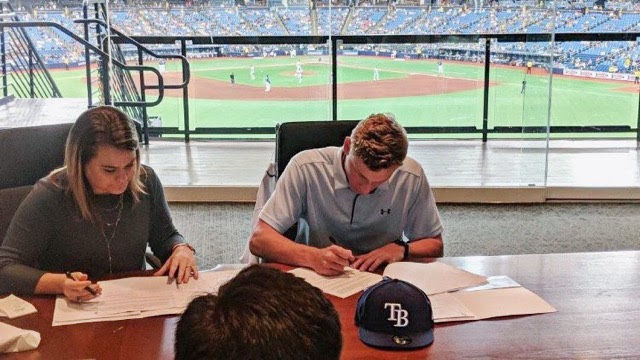 While a game goes on in the background at Tropicana Field, Sydney Malone sits with pitcher Seth Johnson - the 40th overall pick in the 2019 MLB draft - as he signs a contract with the Tampa Bay Rays. [PHOTO COURTESY SYDNEY MALONE/MICHAEL O'TOOLE]

While a game goes on in the background at Tropicana Field, Sydney Malone sits with pitcher Seth Johnson - the 40th overall pick in the 2019 MLB draft - as he signs a contract with the Tampa Bay Rays. [PHOTO COURTESY SYDNEY MALONE/MICHAEL O'TOOLE]

Sydney Malone did not last long in law school, but she has a pretty good reason for it.

The Deshler High and Ole Miss graduate, whom the TimesDaily featured last year when she was a scouting intern with a summer league baseball team in Massachusetts, decided to attend law school at Arizona State hoping to land a job within professional baseball after graduating.

Malone had previously applied for work through the MLB Diversity Fellowship program and she didn’t get a job initially. But things changed dramatically in September 2018 when she got a call from the Tampa Bay Rays asking her to apply for a position.

Malone had a choice to make — stay in law school, which she had just started, or head to professional baseball. With support from her parents and college professors, she chose the latter.

Malone, 23, is now the amateur scouting administrator for the Tampa Bay Rays. She works closely with the team’s scouting director, assistant director and coordinator to help the team gather information on high school and college prospects.

It’s tough to miss law school much when you are living a dream of working in professional baseball.

Baseball season is over for every MLB team except the Houston Astros and Washington Nationals. (Looking for a World Series prediction? Malone will take the Nationals in seven games.)

But for people like Malone it never really ends.

Junior college baseball will start in late January, with four-year colleges and high schools starting up in February. This is a key time for the Rays to assess prospects.

Much of Malone’s work happens in the late spring and early summer, when she and others in the Rays’ office will collect reports on prospects the Rays’ scouts have made. They make sure the team has a draft ID, medical information and other details on each prospect so he is eligible to be drafted in June.

The team will continue scouting the next group of prospects through the summer.

In the early spring, however, Malone occasionally also gets to do her own scouting.

“Everybody in the scouting world knows each other,” Malone said, and when she’s at games other scouts will ask what team she represents.

She’ll say “the Rays” and the other scouts will say who they work for, and it occurs to Malone how special it is to do this.

Malone gained experience scouting college players as an intern in 2017 and 2018 with the Wareham Gatemen — a summer league team in the Cape Cod League made up of college players from around the country.

But she had little experience scouting high school players before working for the Rays, and it can be hard to assess high school talent when the competition is not always up to scratch.

She’s learned how a lot of high school scouting takes place during summer showcases, and scouts will go to high school games the following spring to check on those players’ progress.

“I’ve never felt afraid to ask a question, which is huge for us because we have to operate a little bit different from everyone else because we don’t have a lot of money,” Malone said.

The Rays had an opening day payroll of around $53 million for 2019, according to USA TODAY. That might seem like a lot of money, but it ranked lowest in the league by nearly $20 million. The Yankees and Red Sox — both division rivals — ranked near the top of MLB with payrolls over $200 million.

Tampa Bay doesn’t have enough money to splurge on expensive free agent contracts. Scouting, drafting and developing players well is particularly important for the Rays, and Malone takes pride in that.

Malone said she knows of about five or six women nationwide who have been scouting for an MLB team longer than she has.

Sometimes other scouts are surprised to see her doing what they’re doing, but they seem supportive.

She credits MLB for increasing opportunities for women through its diversity initiative, and she’s thankful to work for the Rays.

Despite its low payroll and perennial underdog status, the 2019 Rays won 96 games and lost only 66. They finished behind the New York Yankees in the American League East but earned one of two spots in the A.L. Wild Card game.

Malone and about 15 other people who have various jobs in the Rays’ baseball operations flew to Oakland for the one-game playoff Oct. 2.

“It was just exciting being with everyone,” she said. “We had like our own little section, in the Coliseum, of Rays employees.”

In front of 54,000 people, the Rays beat the Oakland Athletics 5-1 to earn a spot in the American League Division Series. (The Rays lost to the favored Astros in a competitive series that lasted the maximum five games.)

After the Rays beat Oakland, the players celebrated on the field. Malone said some of the employees who were there that night have worked for the Rays for more than a decade.

Others have worked there several years but hadn’t been around the last time the Rays were in the playoffs, in 2013.

The players pointed up to the team employees and clapped.

“I just get chill bumps thinking about it. It was such a happy, emotional feeling,” Malone said.

It’s up to the players to get the wins, of course, and Malone acknowledged she did not have as much impact this year as other baseball operations employees because it was her first year.

But she saw what it meant to team employees like her who work hard behind the scenes to set the franchise up for success and got to watch it pay off.

“I was really proud to work for the Rays,” Malone said.

The Rays recently asked Malone to come up with a one-year and three-year plan for herself. It seems kind of funny to do that, given how much has changed in the last 13 months. But she is happy with her decision to leave law school and work for the Rays.

“I’m taking it day by day, learning as much as I can,” she said.

Malone loves the world of amateur scouting, and though she has a plan for her future she knows to stay flexible because of how quickly things can change – many times for the better.

“It’s been an incredible experience so far,” she said.