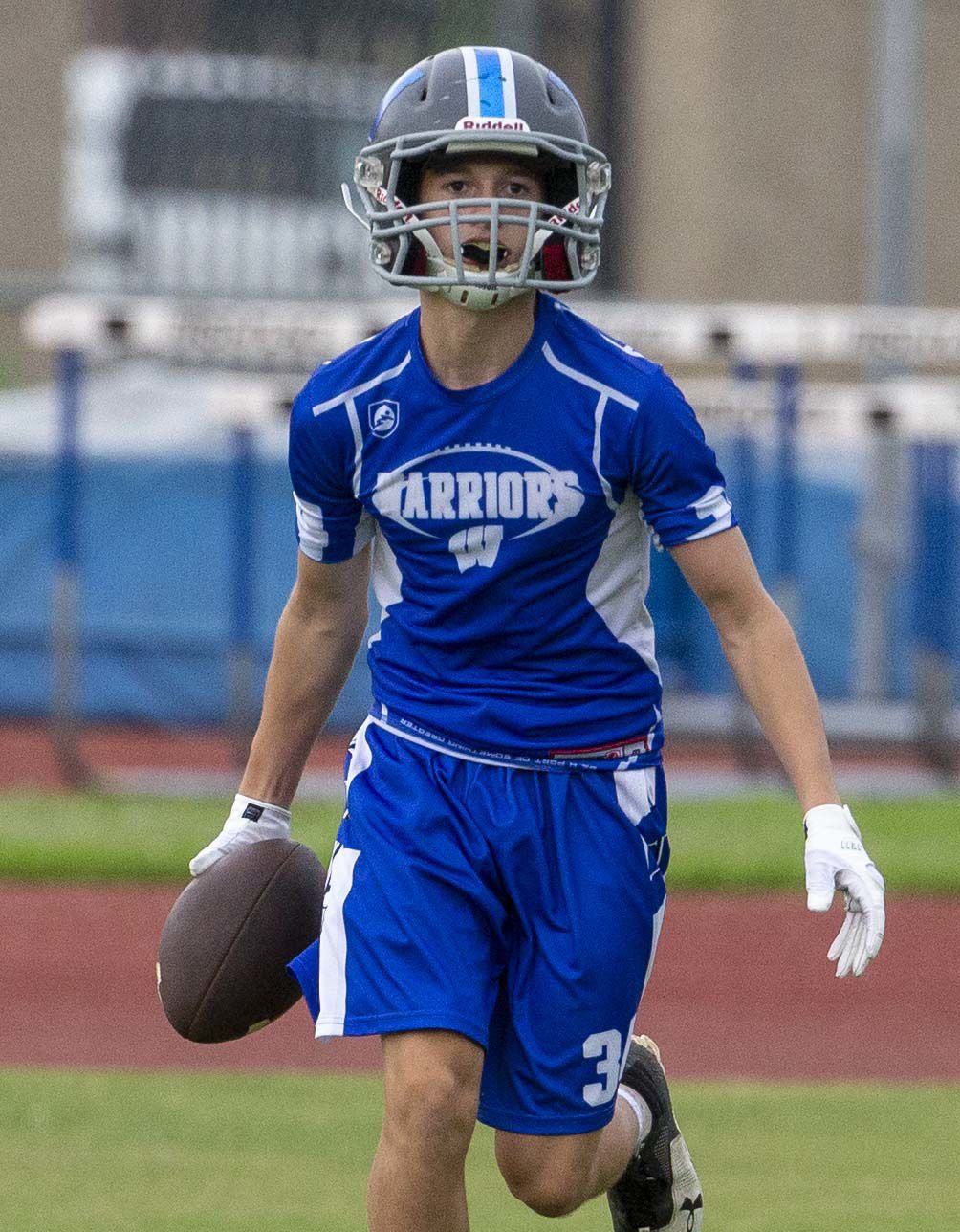 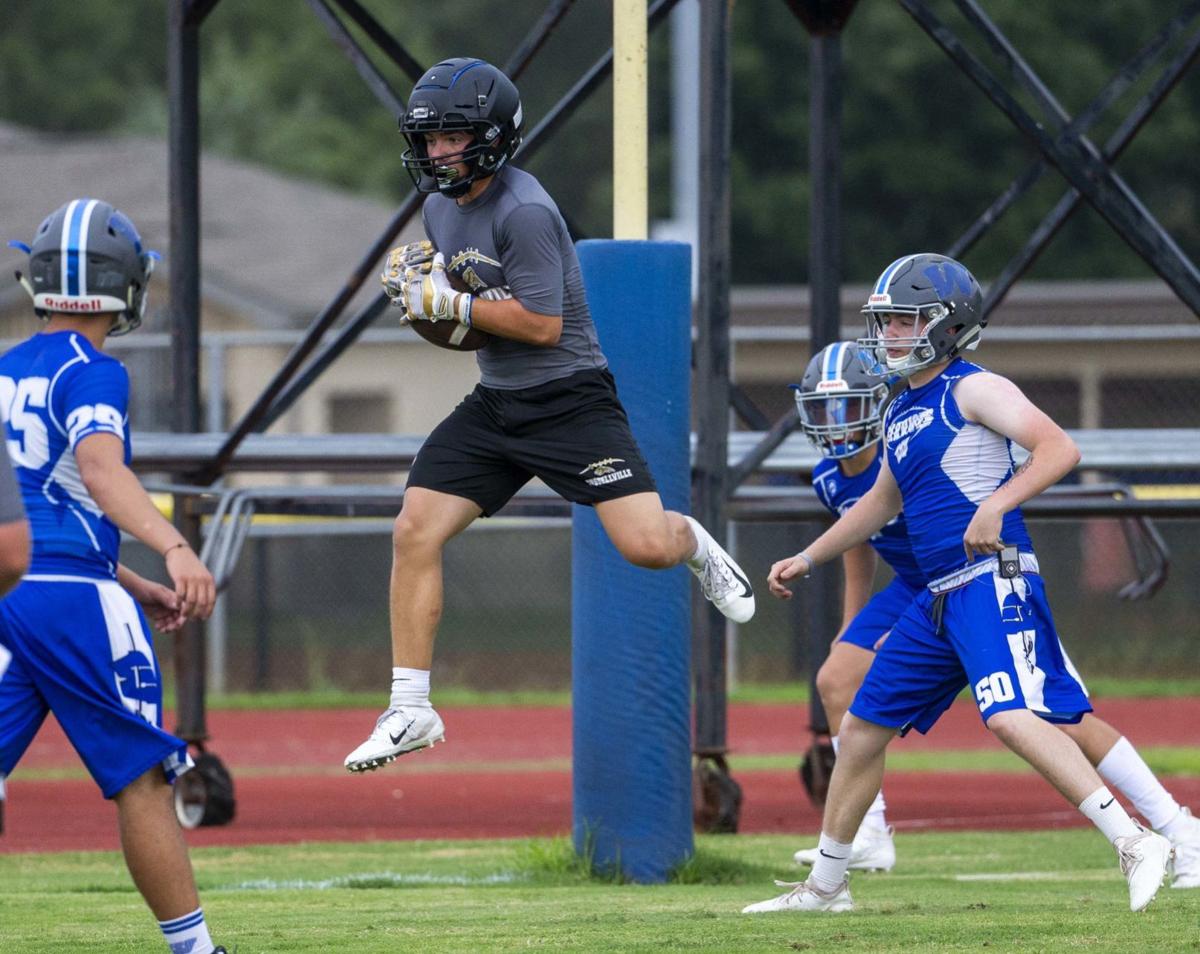 Russellville receiver Cole Barnett goes up for a touchdown catch against Wilson during a 7 on 7 football tournament Thursday at Florence High School. [MATT MCKEAN/TIMESDAILY] 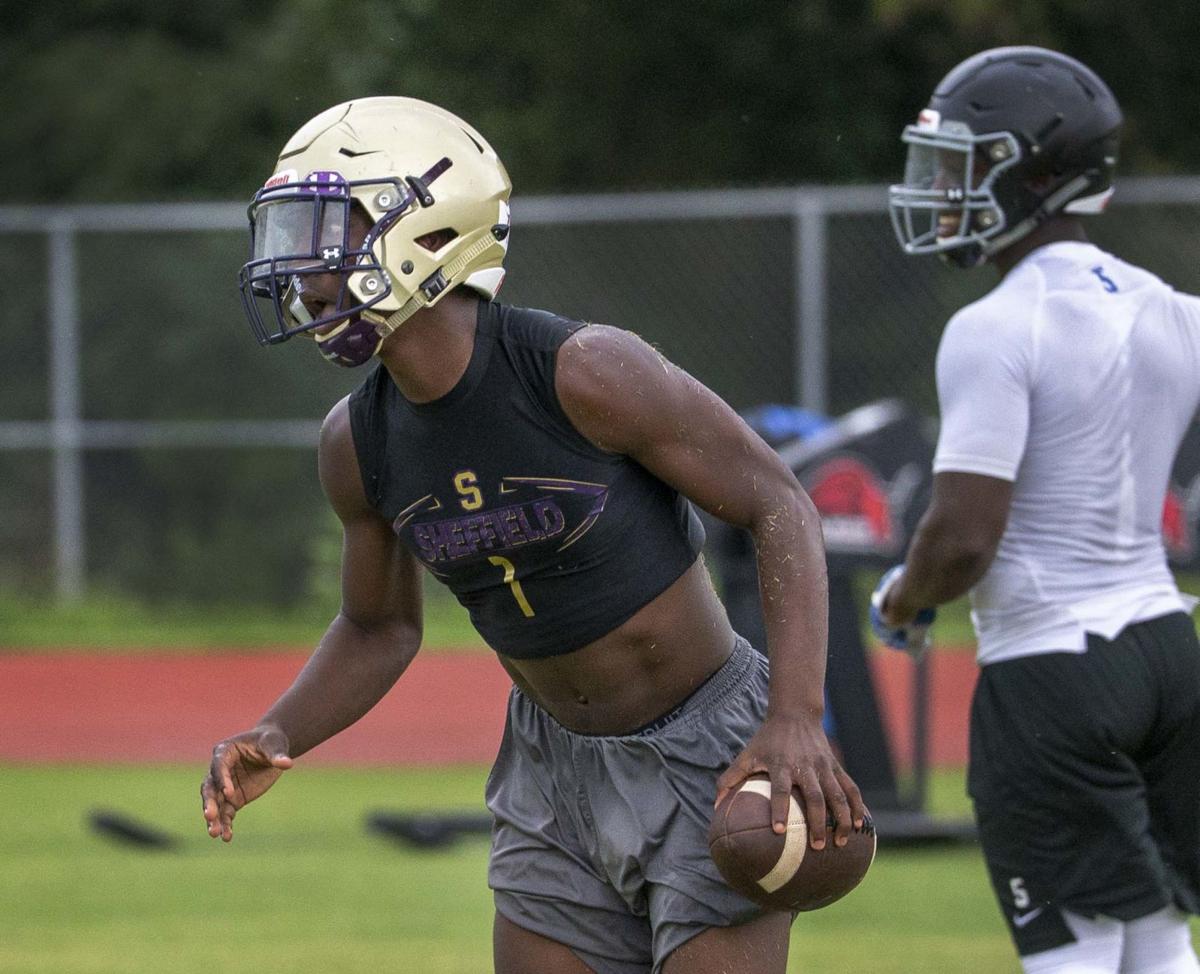 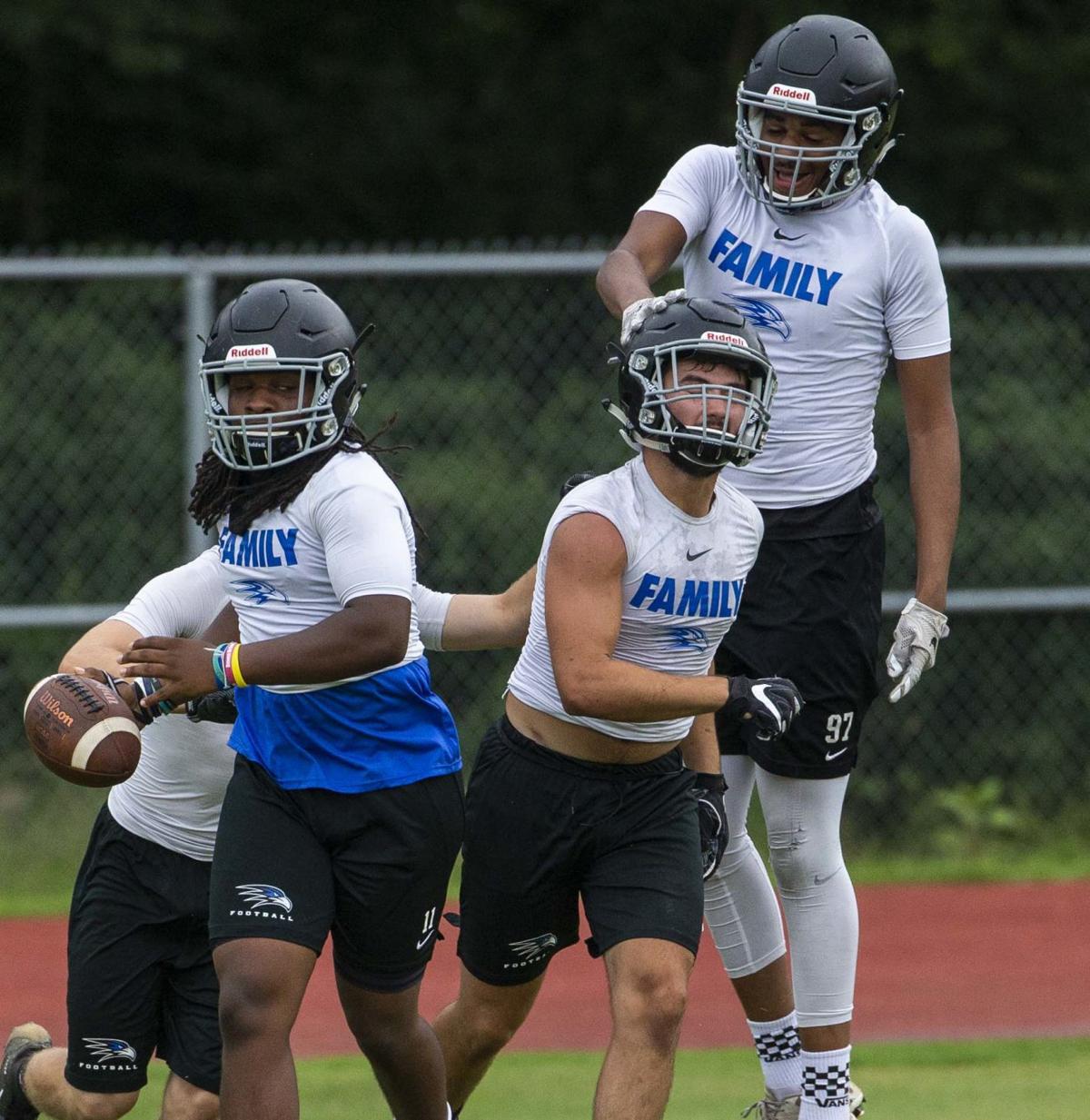 Florence's Preston Hardin is patted on the head as he celebrates an interception against North Jackson during a 7 on 7 football tournament Thursday at Florence High School. [MATT MCKEAN/TIMESDAILY] 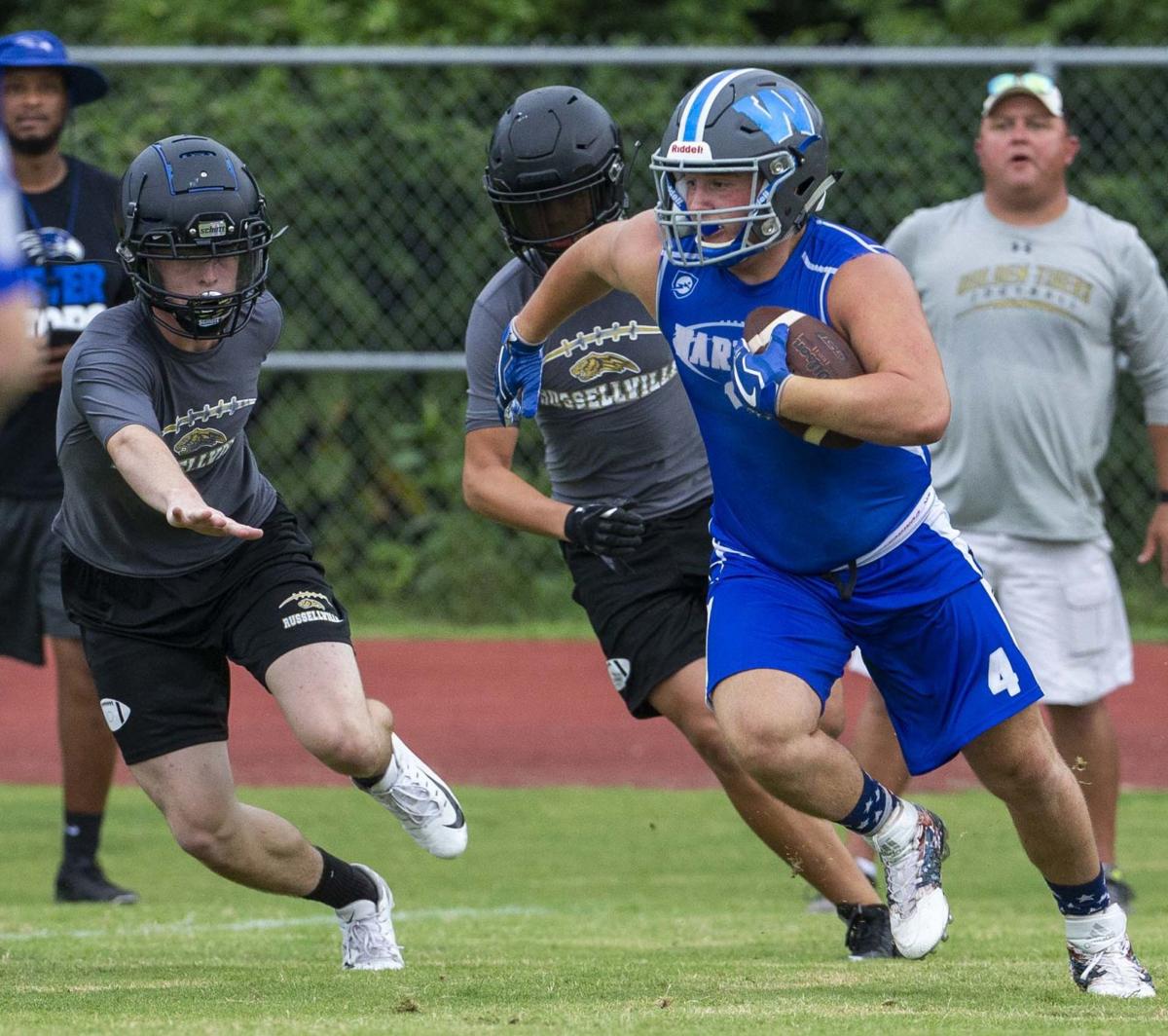 Russellville receiver Cole Barnett goes up for a touchdown catch against Wilson during a 7 on 7 football tournament Thursday at Florence High School. [MATT MCKEAN/TIMESDAILY]

Florence's Preston Hardin is patted on the head as he celebrates an interception against North Jackson during a 7 on 7 football tournament Thursday at Florence High School. [MATT MCKEAN/TIMESDAILY]

FLORENCE — At the end of a long but productive day, Sheffield football coach David Hufstedler and his assistants kept coaching hard as the Bulldogs battled fatigue.

Sheffield had a good morning of round-robin 7 on 7 scrimmages Thursday at Florence High, and with two wins in the afternoon tournament portion the Class 2A Bulldogs matched up against the Class 7A host Florence to close the tournament.

But though Florence proved too tough for Sheffield in the championship scrimmage, Hufstedler was upbeat as he spoke with the team afterward and left the field happy.

“It went awesome. I mean I’m so proud of these guys for battling through the heat,” Hufstedler said. “Had some young guys step up today that, you know, weren’t sure they were going to get a lot of playing time and did a really good job today. We just ran out of bullets at the end.”

Florence beat Russellville in the semifinals of the event and Sheffield beat Giles County (Tenn.). Wilson, Mars Hill and North Jackson were knocked out earlier.

A drizzly, overcast atmosphere in the morning gave way to a sunny afternoon with the humidity typical of a July day in Alabama.

Coaches said that’s why it’s important to rotate people in and out.

“We rotate our guys so much that, while it is a concern because you have to be concerned, I’m not as concerned as if we were playing guys both ways or guys were having to play the whole day.”

Florence looked sharp at the end of the day, using a couple interceptions and a methodical offense to beat Sheffield. Andrew Baugh made a nice catch along the sidelines in the semifinal win over Russellville.

“No matter what happened today we were going to be 0-0 after today. I thought it was a lot of good practice. We got a lot of guys reps. We probably got 45 to 50 guys some reps,” Hester said.

“We executed at a high level and made some mistakes we can fix off the film, so all in all it was a great practice.”

Dee Beckwith and Gardner Flippo took turns playing quarterback, sharing the position as they did last season. Hester said Beckwith also made a touchdown catch at one point.

“Both guys have matured as football players. Gardner’s played a lot of reps at quarterback in his life, and you can tell that and he makes great decisions,” Hester said.

“And Dee’s still kind of raw as a quarterback but he gets better every single time out there and made one of his better throws of his career there late today on a great read. Both those guys are doing very valuable things for us.”

Veteran wide receiver A.J. Cherry made a couple notable catches on passes from quarterback Khori Bowling in the afternoon tournament portion of the day.

But Hufstedler was also excited to see some of the younger players excel.

“It’s even more fun to see these older guys going up and chest-bumping those (younger) guys when they make a good play. They don’t even realize what a great play they made!” Hufstedler said. “And everybody’s getting all excited and hooping and hollering, so that’s a lot of fun.”

Hufstedler joked his players were so tired immediately after the scrimmage they could hardly make it across the field to shake hands, but he expects they gained confidence.

“I think when they look back on it they’re going to be really pleased with it.”

The Golden Tigers have a new quarterback this year in Muscle Shoals transfer Jacob Bishop.

Ritter said his team’s concentration level was a roller coaster in the morning but he was more impressed with the players'  work in the afternoon.

“We had two games (early) where I thought we did a lot of good things, and there were two games where we had no focus at all and two teams that shouldn’t have beat us beat us,” Ritter said. “ … I thought we came back after lunch – it’s scorching – and we had really, really good focus against Mars Hill and came back and beat them. Florence is really, really good and they beat us last game in the semis to go to the finals.

“I thought it was a good day.”

The defending Class 1A state champions will need some newcomers to contribute this fall, and coach Darrell Higgins was glad plenty of them were active Thursday.

“We had a lot of guys get to play who have never played before in this kind of environment, and it was really good for us,” Higgins said. “I was proud of our guys, the way they competed. They’re flat worn out right now, so we know it was a good day.”

He specifically mentioned cornerback Hunter Bridges, who he said is new to football and did good work Thursday.

“We saw some guys that we didn’t know if they could play or not … we think they can play now,” Higgins said.

The Warriors hope to bounce back after a three-win season in 2018, and coach Matt Poarch said 35 to 38 players have been showing up to every workout to try to make 2019 better.

Wilson is shifting its offensive philosophy to a split-back/veer formation not conducive to 7 on 7 scrimmages, but Poarch said the day had particular value for his team defensively. And like Higgins, he’s scouting the team’s newcomers.

“Today was getting reps on some younger guys that we know are going to have to help contribute, and I thought a lot of them stepped up today,” Poarch said. “It was just being able to put eyes on those guys in a pressure situation and seeing how they perform, and I thought they did very well.”