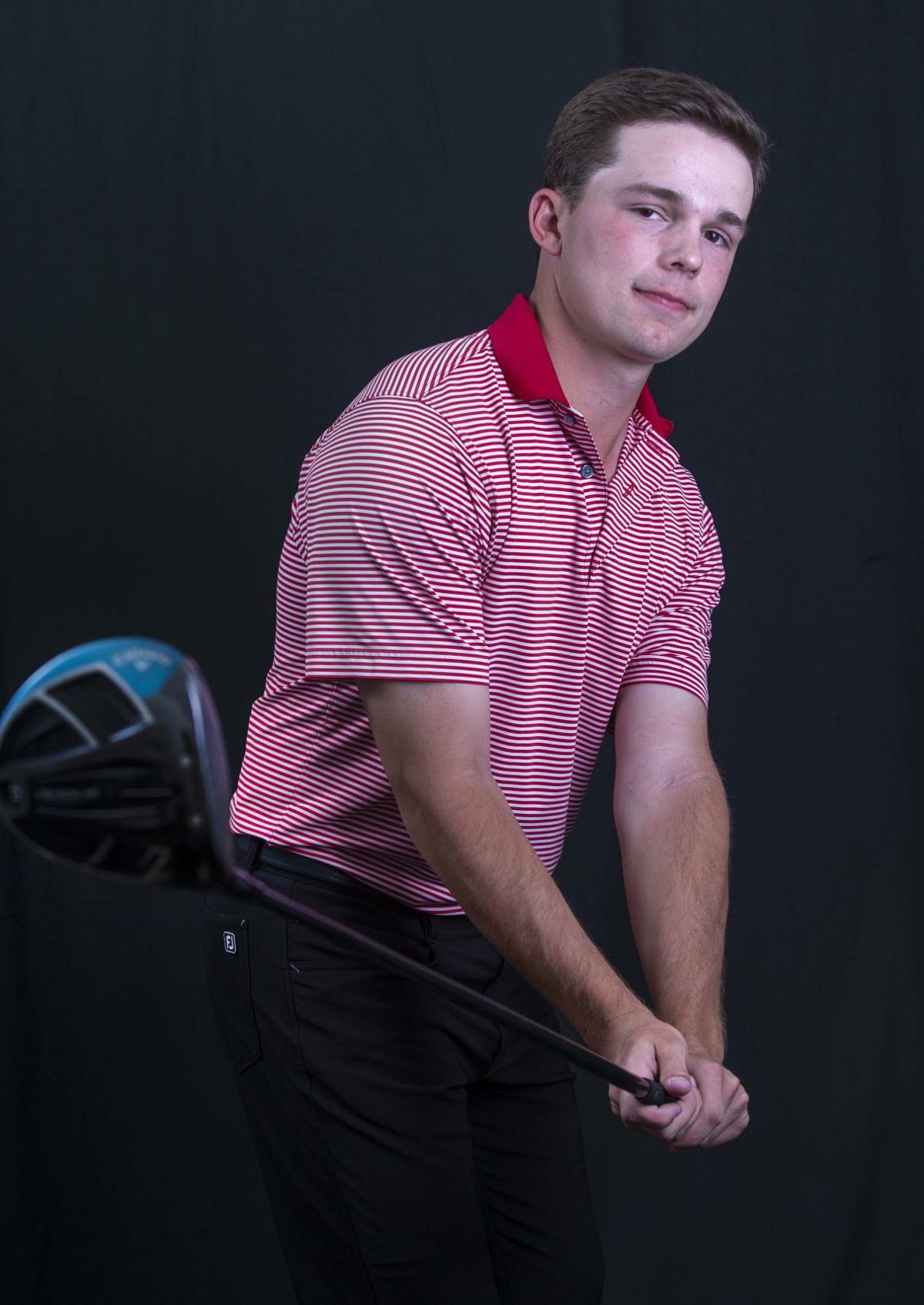 Hunter Battles is the TimesDaily Boys Golfer of the Year.. [MATT MCKEAN/TIMESDAILY] 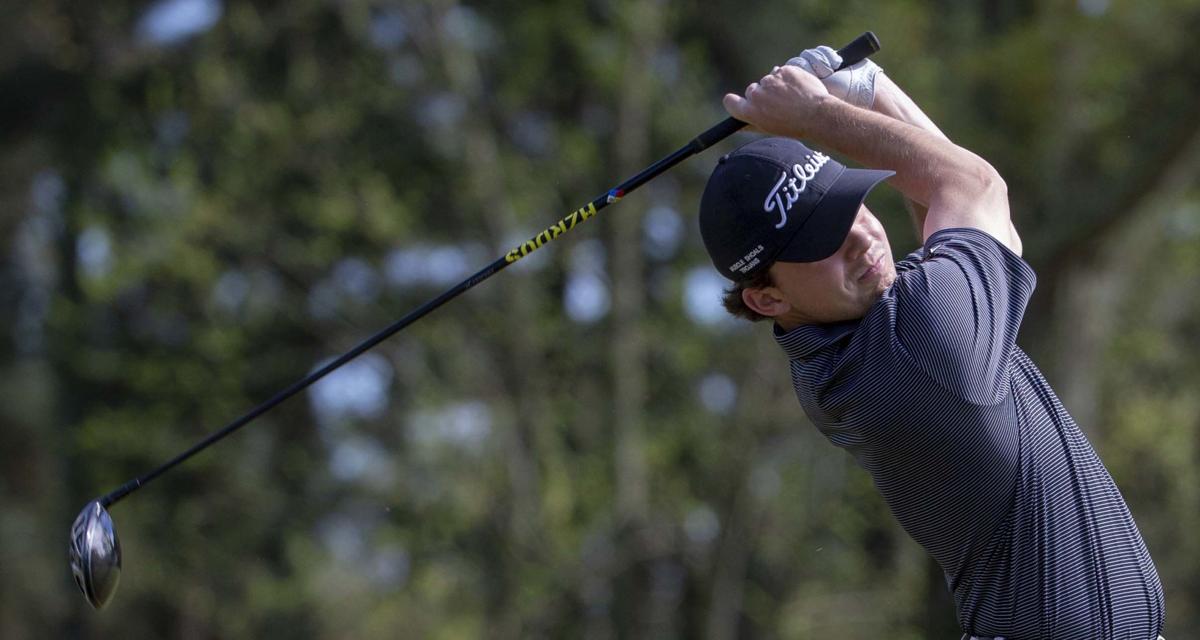 Hunter Battles hits his tee shot during the Brooks Invitational at Turtle Point Yacht and Country Club this past spring. [MATT MCKEAN/TIMESDAILY]

Hunter Battles is the TimesDaily Boys Golfer of the Year.. [MATT MCKEAN/TIMESDAILY]

Hunter Battles hits his tee shot during the Brooks Invitational at Turtle Point Yacht and Country Club this past spring. [MATT MCKEAN/TIMESDAILY]

Hunter Battles, the TimesDaily Boys Golfer of the Year, wasn’t completely satisfied from a statistical standpoint with his now-complete senior season at Muscle Shoals.

That’s probably because when you are college-bound for Louisiana Tech in the fall, little things matter.

Most of the golfing masses, however, would be thrilled to produce a 71.92 scoring average, shooting 65 to capture medalist honors at the Class 6A sectional tournament, a second-place finish in the Palmetto High School (South Carolina) Championship, and a tie for fourth place in the state tournament.

Two areas where Battles was completely satisfied, though, were celebrating a third consecutive state championship with his teammates and his individual growth on the course.

"Just statistically this wasn’t my best year — I think my 10th grade year was,” Battles said. “I think the main goal was to just mature as a person. Coach (Derrick) Gargis, he kept me in line all year. He is really good about putting character before anything when it relates to golf, so he was good about keeping me straight. I think I developed more as a person this year than ever before.”

Battles noted that he handled adversity on the course better than in the past, one of his stated goals before the season began. He also said handling success was also another area in which he wanted to improve.

“Golf is one of those things in that it can make you really look stupid out there,” he said. “It was good to see this year how I handled some adversity. At the start of the season I really didn’t play that great. Played decent coming in but it wasn’t anything crazy. It was good to see that I could handle adversity better than I had in recent years.”

Battles said Gargis placed an emphasis on character and not letting success on the course define the Trojans as individuals. Battles said he took that to heart.

“Handling bad shots better; handling success humbly — that is what coach focused on more than anything,” he said. “We knew we were going to be successful and handling it with character and class is really what we focused on this year.”

Battles has been one of the Trojans’ team anchors on their three consecutive Class 6A championships. He said he was amazed at the level of support the team has gotten during its state championship run.

“It’s crazy the support we get from everybody around town,” he said. “You wouldn’t think that a little golf team would get so much support and love from everybody in the community. That’s one of those things I will cherish for sure.”

Battles signed with Louisiana Tech in November and will spend the summer fine-tuning his game playing in some important amateur tournaments to prepare for longer courses and tougher competition. He is aware that moving on to the next level won’t be easy.

“In high school you can kind of play away from your weaknesses,” he said. “If you’re not hitting your driver well you can dink some irons around and get away with it. In college, it’s big boy golf. I really enjoyed playing high school golf. It’s so much fun being with the guys, but playing in those big amateur tournaments it’s just a different feel.”

• Hunter Battles, Muscle Shoals – Led area players with a 71.92 stroke average that included a 65 in winning the section championship. Finished second in the Palmetto (S.C) Championship. Tied for fourth place in the Class 6A tournament.

• Eric Boutwell, Russellville – Compiled a 72.3 stroke average while making the all-tournament team in every tournament this season. Shot 66 to claim medalist honors at Eagles Nest in Guntersville. Notched top-10 finish at Class 5A tournament.

• Thomas Regan, Muscle Shoals – Had a 73.46 scoring average. Won Turtle Point Classic with a 67. Won James Clemens Invitational with a 69 and was medalist at sub-state with a 66. Tied for fourth in Class 6A tournament.

• Jaceton Murray, Russellville – Had a 74.3 stroke average for the Golden Tigers. Made five all-tournament teams. Shot 79-77 at state tournament to finish tied for third.

• Zach Ashley, Brooks – Compiled a stroke average of 75.0 for Class 4A champs. Shot 69 in a tournament at Canebrake and 73 at Point Mallard to finish as runner-up in sectionals. Finished fourth at the state tournament.

• Brayden Bendall, Russellville – Had a 75.1 stroke average. Made four all-tournament teams and finished 10th at the state tournament.

• Justin Olive, Brooks – Compiled 75.6 stroke average that included two rounds of 69 (Canebrake, Limestone Springs). Won the Class 4A sectional tournament with a 72 at Point Mallard) and shot 75 at sub-state at Silver Lakes.

Virus deaths in Alabama surpass 550 with new rules in effect

Group buys Alabama abortion clinic to keep it from closing