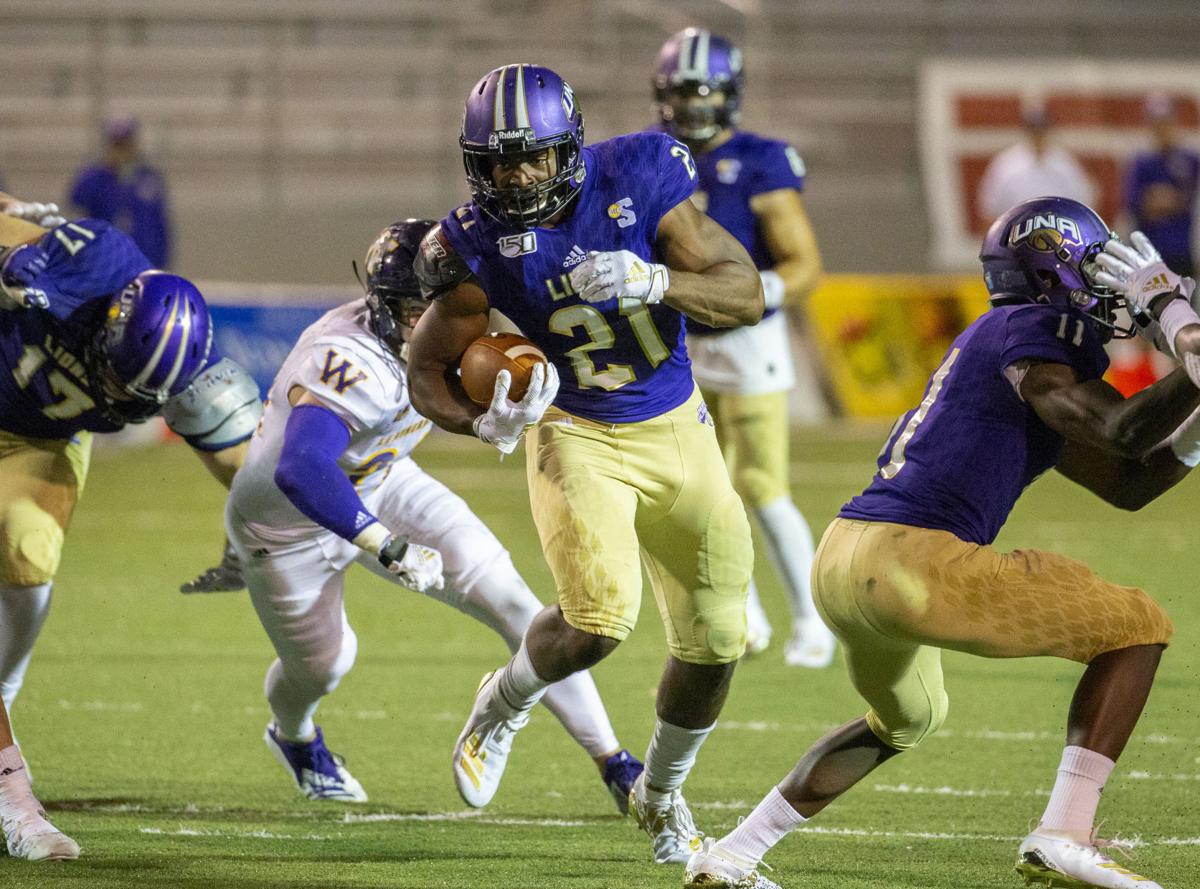 UNA's Terence Humphrey runs into the line against Western Illinois. Despite two knee injuries, Humphrey stuck with the team and was even voted as one of the captains this season. [MATT MCKEAN/TIMESDAILY] 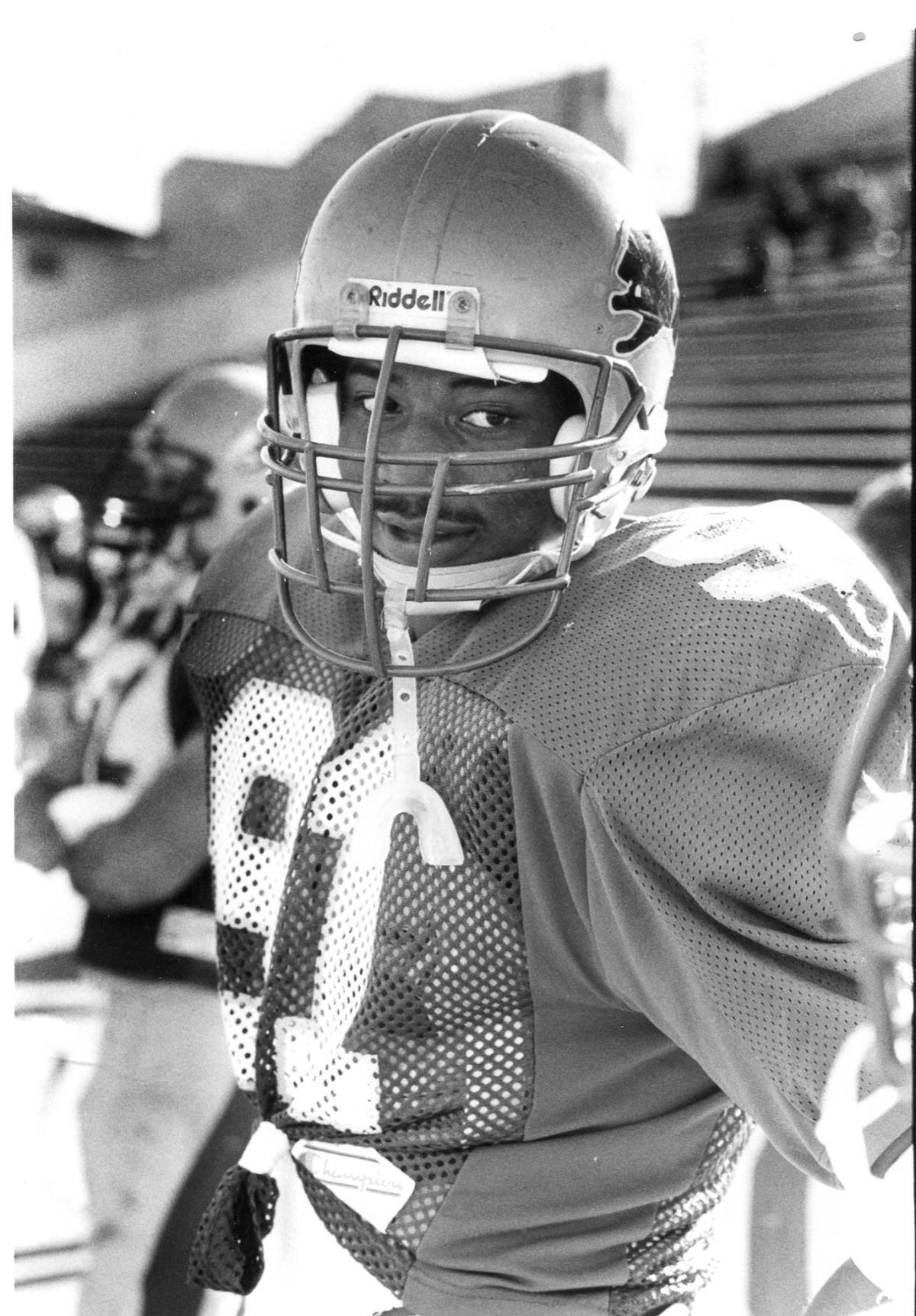 Terence Humphrey Sr. also played for the Lions in 1987. [PHOTO COURTESY OF UNA]

UNA's Terence Humphrey runs into the line against Western Illinois. Despite two knee injuries, Humphrey stuck with the team and was even voted as one of the captains this season. [MATT MCKEAN/TIMESDAILY]

Terence Humphrey Sr. also played for the Lions in 1987. [PHOTO COURTESY OF UNA]

North Alabama running back Terence Humphrey prayed for a good start to the season.

After all, the past three years were up and down for the senior from Huntsville.

He redshirted his freshman year, then tore his ACL during his second season after a promising start. Most of 2017, it was tough to get the injury out of his mind.

In 2018, it was the same injury, same knee. He spent most of the last two seasons in a brace, but went without it in preparation for this season. During his toughest times, he thought about his family.

Now, for the first time in awhile, he feels like himself.

“It was hard, it was really really hard,” Humphrey said of the recovery process. “These past two years have been hard on me … (but) I feel like this is the year I can finally break out.”

Between the physical therapy, visits to the doctor and not being able to play, Humphrey said recovering from his array of injuries was the hardest thing he’s had to go through in his life.

But his prayers would soon be answered. On Aug. 29, in the first game of the season against Western Illinois, Humphrey ran for 102 yards and scored the go-ahead touchdown on a 62-yard run in the third quarter.

“To have a game like (that), I feel like it sets me up for a good senior year,” Humphrey said.

Humphrey, known as T.J. — short for Terence Jr. — by his family, is the son of Terence Humphrey Sr.,who played linebacker at Auburn and UNA. He was recruited to Auburn by former head coach Bobby Wallace, who took over at UNA in 1988.

Football has always been a part of his life. When he was 10, the local youth coach saw him playing baseball. Humphrey’s mother, Sharon, recalled the coach saying that he could come try out for football, and if he liked it wouldn't even have to pay the dues.

Football wasn’t just something Humphrey and his dad shared. His brother, Jalen Humphrey, is a sophomore linebacker at Kentucky Wesleyan. The two always competed against each other playing in the backyard. When they were kids, Jalen Humphrey said his brother was his favorite player.

In middle school, Jalen’s football coach wanted to change his position to linebacker to fit the needs of the team. He wasn’t a fan.

Jalen eventually gave in to the new position but had one stipulation. He wanted to wear No. 21, the number his brother wore at the time and still does today. Now, heading into the 2019 season, Jalen Humphrey was named a captain — and switched his jersey number to 21.

“I just wanted to show him that, regardless, I’m still going to represent him,” Jalen Humphrey said. “I just want him to know that I play for him and I play for our family.”

Humphrey’s athletic career brought him to Columbia High School in Huntsville, where he played for head coach Chris Hancock his senior year, Hancock’s first with the Eagles’ program.

Humphrey played for a variety of coaches at Columbia, and when Hancock arrived he said he appreciated the the senior's leadership

In 2014, Humphrey rushed for 1,661 yards and 27 touchdowns. During a two-week stretch of the season, Humphrey played quarterback and accounted for 13 total touchdowns.

He was named Huntsville City Schools Most Valuable Player and earned all-state honors. Columbia, a school that didn’t previously have a tradition of winning, went from 1-9 to a 4-6 record Humphrey’s senior year.

“He’s developed through high school. Being around him, he makes you look good as a coach,” Hancock said. “He was a big part of the start of my success.”

Humphrey's path to success began at Huntsville's All-City banquet honoring the top area players. The speaker that night was Wallace.

After the banquet, Wallace asked Humphrey Sr. to send him film of his son. The following Monday, the Humphreys traveled to campus, and he was offered on the spot.

“T.J. just loved it,” Humphrey Sr. said. “It made me feel good that he went to Florence.”

‘This is my dream’

Humphrey’s career with the Lions took a turn in a game against Valdosta State in 2016. He scored two touchdowns and was having one of his best performances with UNA, looking a lot like the player Wallace envisioned when he signed him in 2015.

But on his first carry in the second quarter, he sustained a torn ACL. it was his first major injury and ended his season.

“He was kind of devastated,” Humphrey Sr. said. “He let it affect him a little bit but I told him, I said ‘you have to fight through adversity’. Me and his mom told him, ‘Keep God first and everything will work out.’”

Everything did eventually work out, but it wasn’t easy to get there. In a 24-7 win over Jackson State last season, Humphrey injured the same knee. Production-wise, he was having his best college season, rushing for 67 times for 290 yards and two touchdowns. But, the diagnosis was another torn ACL.

“It was just tearing me up to see my son because he was in pain, he was hurting,” his mom, Sharon Humphrey, said.

Support for Humphrey came from in droves. Hancock said the two exchanged messages over Twitter. Jalen regularly talked with his brother on FaceTime. His mother said her son wanted to forgo the rehab and get out on the field as soon as possible. But she encouraged him to stay patient.

In talking with her son, Sharon Humphrey told her son that if he wanted to walk away from football, his family would make sure he would be able to finish school and earn his degree.

“He said, ‘No momma, this is my dream, this is what I want to do,’” Sharon Humphrey said.

The biggest transition for Humphrey was getting his mind right.

After the first surgery, Humphrey was hesitant on the field. Jalen Humphrey said his brother didn’t feel like he was full-go while still wearing the brace. But having gone through the same injury again, Humphrey thinks he’s learned his lesson.

Even if he’s 100 percent healed, Humphrey said he can’t think about his knee.

“That’s what I tried to stay away from,” Humphrey said. “I made it to this point, just going out there and playing.”

Jalen got to watch UNA's opener against Western Illinois, and said his brother looked like his former self when he was injury free.

“He looked so comfortable, he looked high spirited, when he ran, he ran hard like he always did growing up,” Jalen said.

His parents watched from the stands. His mother could tell Humphrey was anxious on the sidelines, wanting to get out on the field. But after his touchdown run, after the game ended, she couldn’t describe her emotions.

Humphrey was voted a team captain at the beginning of the season. With all his injuries, his parents said there were times they weren’t sure if he would stick it out.

But they’re glad he did.

“He’s a role model, he’s very well-liked,” Willis said. “He’s had a good start, but we have a lot of football left to be played. I expect him to be a big part of that.”

On Saturday, Humphrey and UNA return to Braly Stadium at 7 p.m. to play Alabama A&M, the college in his hometown that didn’t offer him a scholarship.

It’s also where his mother went to school. However, Sharon said the program never sent any letters or called to ask about him.

Humphrey's parents will be at the game. His brother will be watching after Kentucky Wesleyan finishes playing. With his Huntsville ties, Humphrey will line up against friends, former teammates and a familiar opponent.

But no matter what happens Saturday, Humphrey is exactly where he wants to be. He’s prayed for it and it happened. He overcame his setbacks. Now, for him, it’s just about playing the sport he’s always loved.

“I’m proud of him,” Humphrey's dad said. “He’s always believed he could come back. He’s finally got it out of his head and started playing football again.”