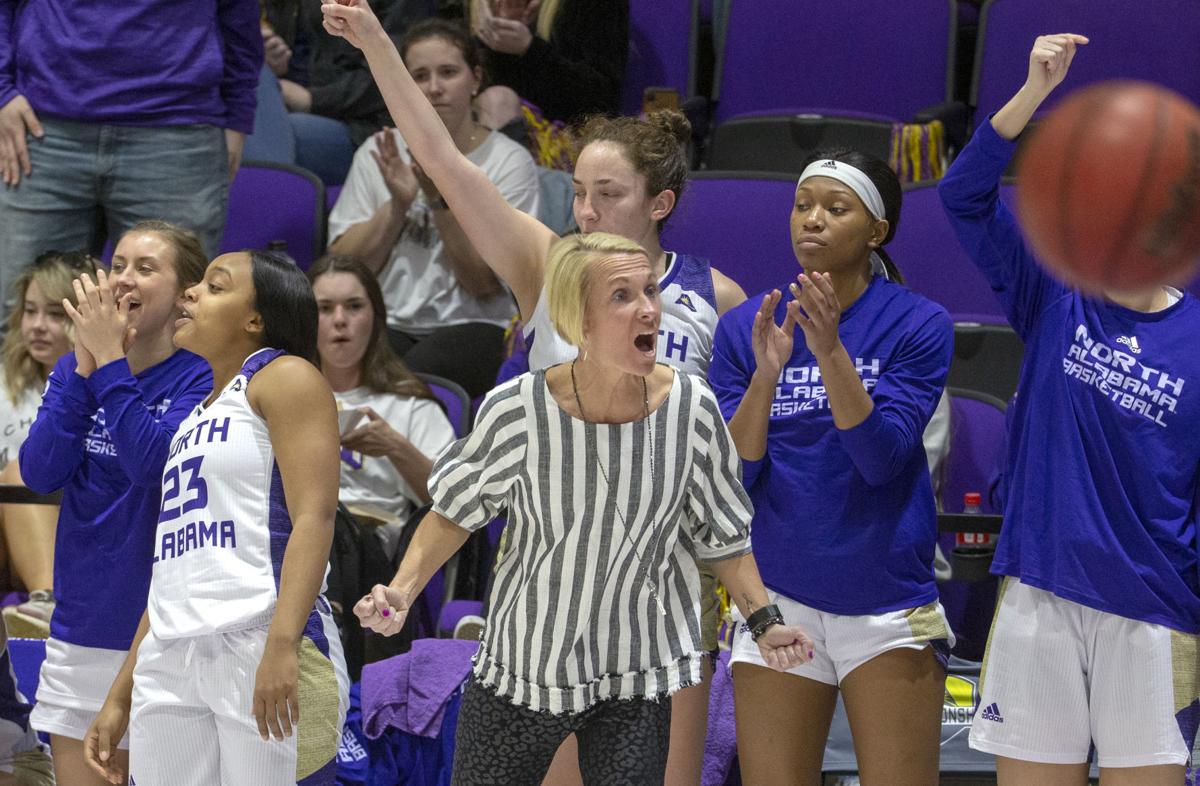 North Alabama's Missy Tiber said the Lions' five seniors built the blueprint for what she wants her basketball program to look like. [MATT MCKEAN/TIMESDAILY] 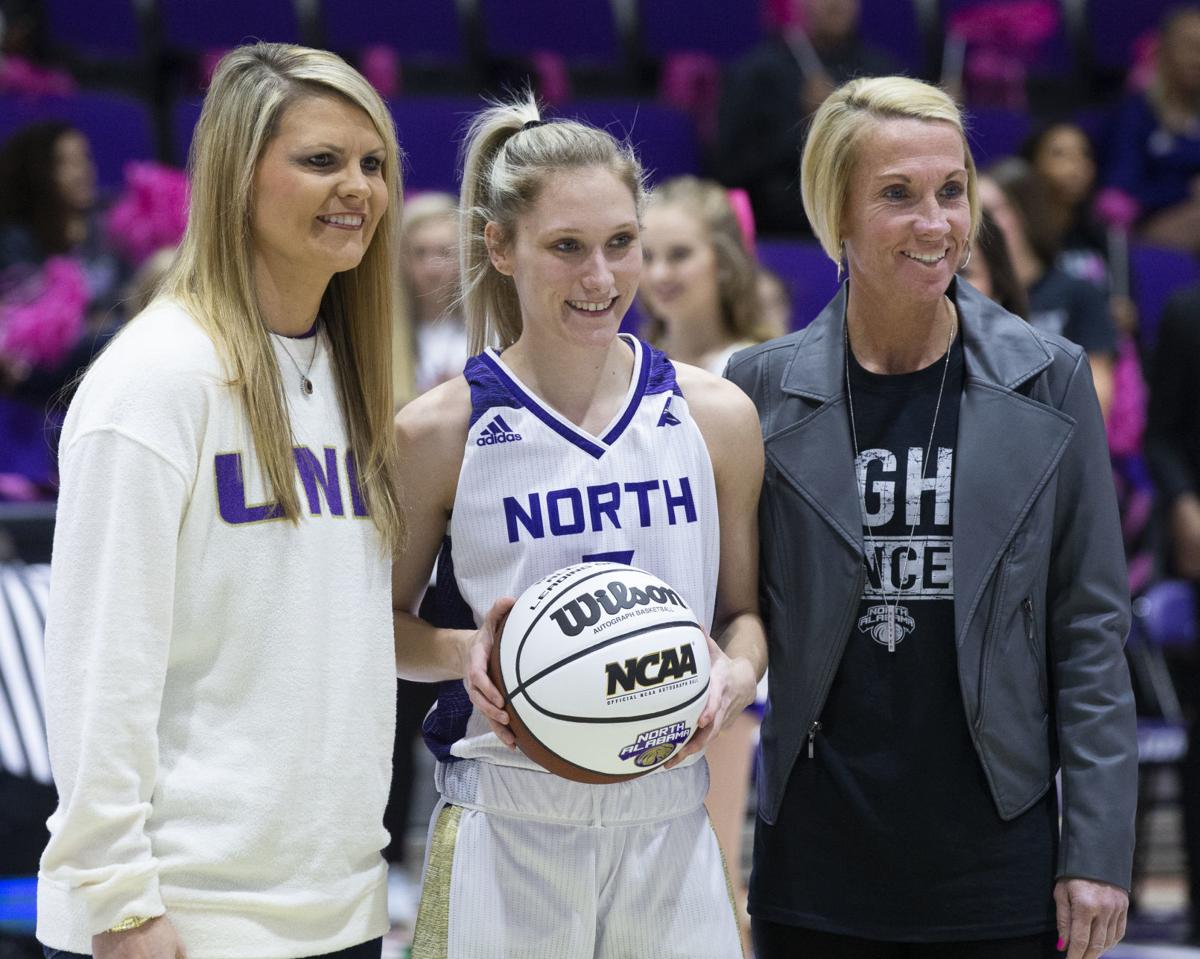 Ivy Wallen was honored with Amber Deline and head coach Missy Tiber before a game against Liberty during the 2019-2020 regular season for becoming the program's all-time leading scorer. [MATT MCKEAN/TIMESDAILY]

North Alabama's Missy Tiber said the Lions' five seniors built the blueprint for what she wants her basketball program to look like. [MATT MCKEAN/TIMESDAILY]

Ivy Wallen was honored with Amber Deline and head coach Missy Tiber before a game against Liberty during the 2019-2020 regular season for becoming the program's all-time leading scorer. [MATT MCKEAN/TIMESDAILY]

The dust has settled on the North Alabama women’s basketball team’s 2019-2020 season, one that ended abruptly without a chance to play in a postseason tournament.

By no fault of their own, the ongoing spread of coronavirus cut short a number of opportunities for basketball teams to continue play across the country, including UNA’s. It was a long shot for the Lions to make the WNIT tournament after falling to Liberty in overtime on March 11, but they seemed to be a surefire pick for the Women’s Basketball Invitational.

However, both tournaments were cancelled.

“The ending is obviously disappointing,” head coach Missy Tiber said. “But that’s for everybody in the country right now. Our pain is no greater than anyone else’s. At the same time, we really invested so much and really built it to get to this stage (and) it was kind of disheartening to see the seniors not get another opportunity to play.”

While disappointed for her five seniors, Tiber was quick to show a multitude of appreciation for what those players brought to the program.

Three consecutive 20-win seasons, 23 broken school records and a pair of tournament appearances at both the NCAA Division I and Division I-levels later, the group is labeled as “program changers.”

After the Lions fell to the Flames in the ASUN semifinals, Tiber and senior point guard Ivy Wallen shared an emotional moment, fighting tears as they talked about the last couple seasons.

Wallen leaves UNA as the program’s all-time leading scorer, and her sister Emma, known for sharpshooting and pesky defense, is right behind her in second place.

Tiber admitted Wallen, as the team’s point guard, takes the brunt of criticism when things go wrong, but didn’t hesitate in calling her the leader of the team.

“I wouldn’t have wanted to coach anybody else in that (position) than her,” Tiber said on Mar. 11.

Ivy Wallen began her college career as a shooting guard, as she admitted the point guard position in Tiber’s system is tough to grasp.

But as time went on, her confidence grew and so did her game.

“(The coaches) did a good job of getting me in that position and believing in me this whole time, to make last second shots, and keep the ball in my hand,” Wallen said after the Lions loss to Liberty. “It means a lot to be here at UNA.”

Tiber also pointed to how the program was built, when she met with the Wallens for dinner and a few weeks later they committed to UNA. Later, three more players transferred in to build the core of the team for years to come.

Now, the page turns as the Lions look to a new chapter with their basketball program. Tiber, while noting it will be somewhat of a slight rebuild as she will lose a large chunk of the program, still has confidence the returning players can keep UNA a contender in the ASUN conference.

“We have kids that came off the bench this year that proved that they’re great players and some of the best players in this league,” Tiber said. “I’m excited about what the future holds.”

Planning for the future

UNA plans on bringing in a few transfers to go along with the 2020 recruiting class, which she hopes to finish up, but the current situation leaves some of those plans on hold for the time being.

Of the returning players, Tiber gushed about the play of freshman guard Jaida Bond, who turned it on the last few games of the season. She finished with 19 points in the overtime loss to Liberty, including a layup to tie the game at the end of regulation.

“She proved herself enough, we love her,” Tiber said. “Excited about what the future holds for her.”

Then, there’s junior forward and ASUN Newcomer of the Year Olivia Noah, who transferred in from Incarnate Word and bolstered the team offensively by shooting 42 percent from 3 and averaging 10 points per game in ASUN play.

Not only did Tiber notice her contributions, but she also saw her enjoying playing at UNA. Noah hit a huge 3-pointer against Liberty in overtime and was skipping back down the court after the shot went in with a smile on her face before running back on defense.

“She’s just a big-time player,” Tiber said. “She’s a type of person that you want as a part of your program, she helps elevate that culture to another level.

There’s also Jaila Roberts, who’s court-savvy, as Tiber explains it, who will be called upon to lead the team at point guard. Add in Jaylin Austin, a tough defender who will have to step up in the post in the absence of Brittany Panetti, and the Lions have pieces to work with for next season.

Through all of it, Tiber can both reminisce of what her team has done but still recognize the work to be done to sustain success.

“It wasn't hard work to finish where we’re at right now,” Tiber said. “It’s to continue to build this program to where we’re contenders every year.”